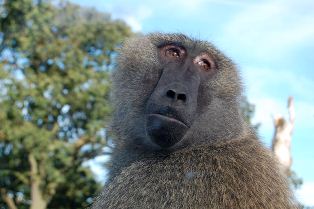 WASHINGTON (AP) -- Dan the baboon sits in front of a computer screen. The letters BRRU pop up. With a quick and almost dismissive tap, the monkey signals it's not a word. Correct. Next comes, ITCS. Again, not a word. Finally KITE comes up.

He pauses and hits a green oval to show it's a word. In the space of just a few seconds, Dan has demonstrated a mastery of what some experts say is a form of pre-reading and walks away rewarded with a treat of dried wheat.

Dan is part of new research that shows baboons are able to pick up the first step in reading - identifying recurring patterns and determining which four-letter combinations are words and which are just gobbledygook.

The study shows that reading's early steps are far more instinctive than scientists first thought and it also indicates that non-human primates may be smarter than we give them credit for.

"They've got the hang of this thing," said Jonathan Grainger, a French scientist and lead author of the research.

Baboons and other monkeys are good pattern finders and what they are doing may be what we first do in recognizing words.

It's still a far cry from real reading. They don't understand what these words mean, and are just breaking them down into parts, said Grainger, a cognitive psychologist at the Aix-Marseille University in France.

In 300,000 tests, the six baboons distinguished between real and fake words about three-out-of-four times, according to the study published in Thursday's journal Science.

The 4-year-old Dan, the star of the bunch and about the equivalent age of a human teenager, got 80 percent of the words right and learned 308 four-letter words.

The baboons are rewarded with food when they press the right spot on the screen: A blue plus sign for bogus combos or a green oval for real words.

Even though the experiments were done in France, the researchers used English words because it is the language of science, Grainger said.

The key is that these animals not only learned by trial and error which letter combinations were correct, but they also noticed which letters tend to go together to form real words, such as SH but not FX, said Grainger. So even when new words were sprung on them, they did a better job at figuring out which were real.

Grainger said a pre-existing capacity in the brain may allow them to recognize patterns and objects, and perhaps that's how we humans also first learn to read.

The study's results were called "extraordinarily exciting" by another language researcher, psychology professor Stanislas Dehaene at the College of France, who wasn't part of this study. He said Grainger's finding makes sense. Dehaene's earlier work says a distinct part of the brain visually recognizes the forms of words. The new work indicates this is also likely in a non-human primate.

This new study also tells us a lot about our distant primate relatives.

Bill Hopkins, a professor of psychology at the Yerkes Primate Center in Atlanta, isn't surprised.

"We tend to underestimate what their capacities are," said Hopkins, who wasn't part of the French research team. "Non-human primates are really specialized in the visual domain and this is an example of that."

This raises interesting questions about how the complex primate mind works without language or what we think of as language, Hopkins said. While we use language to solve problems in our heads, such as deciphering words, it seems that baboons use a "remarkably sophisticated" method to attack problems without language, he said.

Key to the success of the experiment was a change in the testing technique, the researchers said. The baboons weren't put in the computer stations and forced to take the test. Instead, they could choose when they wanted to work, going to one of the 10 computer booths at any time, even in the middle of the night.

The advantage of this type of experiment setup, which can be considered more humane, is that researchers get far more trials in a shorter time period, he said.

"They come because they want to," Fagot said. "What do they want? They want some food. They want to solve some task."

Seth Borenstein be followed at http://twitter.com/borenbears