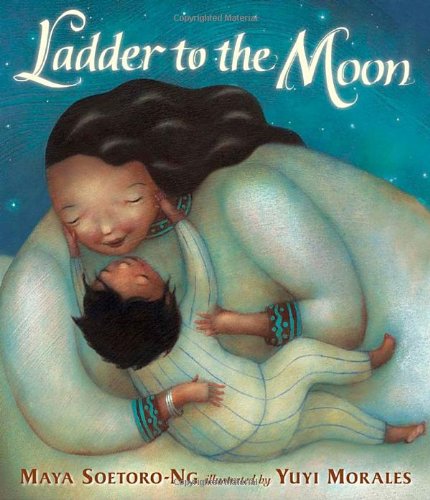 "My daughter Suhaila was born a full decade after my mother died… Becoming a parent made me think of my own mother with both intense grief and profound gratitude. More than anything, I wished that my mother and my daughter could have known and loved each other…

My mother was a remarkable woman. I hoped that I could teach Suhaila some of the many things I learned as I grew up witnessing my mother's extraordinary compassion and empathy. It was then that I decided to unite grandmother and grandchild through a story in which my mother could meet one of her granddaughters and share the moon with her."


When Dr. Maya Soetoro-Ng was growing up on the island of Java, her mother pinned a postcard over her bed of a Georgia O'Keefe painting entitled "Ladder to the Moon." The surreal tableau, which featured a ladder suspended in the desert air and stretching towards a lonely half-moon hanging high in the sky, served to whet the imagination of the bright youngster with an insatiable curiosity.

It's important to remember that when the phrase "Reaching for the Moon" was originally coined, it was intended to be applied to the implausible aspirations of fanciful dreamers. However, if the historic lunar landing of 1969 taught the world anything, it was the priceless lesson that even a destination as seemingly unattainable as the Moon was actually within our grasp all along. So, why not dream big?

This was the essence of the message Maya and her big brother, Barack, were raised with by their mom over the course of their childhood. Consequently, both of these trailblazers overcame the odds en route to enjoying phenomenal success in their chosen fields of endeavor.

Now, Maya has opted to pass along a measure of her late mother's inspiration via an enchanting children's tale appropriately entitled "Ladder to the Moon." Illustrated by a delightful array of delicate, airbrush drawings, the evocative narrative relates a mythical meeting between the author's daughter, Suhaila, and the grandmother she unfortunately never actually had a chance to meet.

In the story, dearly-departed Grandma Annie appears outside Suhaila's window at bedtime, and together they embark on an eventful journey by ladder up to the Moon. The lucky, little girl learns some valuable life lessons along the way, while the two simultaneously make the most of the posthumous opportunity to bond.

Overall, a remarkably-rich, instant classic likely to strike an emotional chord deep within the souls of kids from 2 to 92.