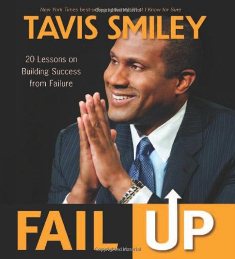 "If they're being honest, most people who have ever succeeded in any human endeavor will tell you they learned more from their failures than they ever learned from their successes… Failure is an inevitable part of the human condition… Through my scars, I have been blessed to arrive at a place I never imagined. .

When you take the time to learn your lessons, when you use those lessons as stepping-stones to climb even higher than you were before, you transcend failure—you 'fail up.' In this book, I detail 20 of the most impactful lessons of my life…I'm a witness. You CAN fail up!"

Given Tavis Smiley's lofty status as the host of a hit, nationally-syndicated, TV talk show, one might not suspect that he'd suffered any setbacks over the course of his meteoric rise. But contrary to appearances, the accomplished broadcaster/entrepreneur/publisher/philanthropist/author has definitely taken his share of missteps on his way to the top.

And now he's decided to mark his 20th anniversary in the business by writing a how-to, or should I say a how not-to book recounting 20 of the biggest blunders he's made in life. The point of the revealing exercise is ostensibly to give hope to the downtrodden and discouraged by illustrating how much more we can potentially learn from our mistakes than from our successes.

In this warts-and-all memoir, Tavis owns up to a number of embarrassing doozies, ranging from getting arrested for writing bad checks to padding his timesheets at a job to graduating 15 years late from college because he flunked a course the second semester of his senior year. He also admits to mooching off former NFL great Jim Brown when he first arrived in Los Angeles and to almost moving back home to Indiana dead broke when, as Gladys Knight sings it, "L.A. proved too much for the man."

What I found most fascinating, nevertheless, is hearing Tavis expound on some of his more public falls from grace, such as being fired by BET Chairman Bob Johnson, being called a "House [N-word]" by hip-hop mogul Russell Simmons and, perhaps most painfully, being rejected by much of the black community for his failure to embrace Barack Obama during the 2008 presidential race.

He addresses the Obama controversy in heartfelt fashion in a chapter entitled, "When Everybody Turns against You." There he reflects upon the tears spilt after being thrown under the campaign bus by fans and colleagues alike, including radio DJ Tom Joyner, a longtime-friend and colleague who all but predicted his professional demise.

But to his credit, Tavis has not only survived but flourished mightily. In fact, the brother proves himself here to be humble enough to air his most-humiliating faux pas so they might serve as cautionary tales for anyone contemplating following in his footsteps.