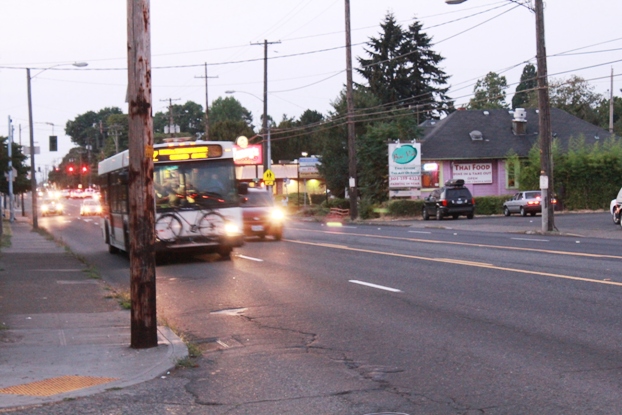 PHOTO: Portland's 82nd Avenue is part of the State of Oregon's transportation system. Smaller streets are the city's responsibility and there is concern that pedestrians in low-income areas are more than twice as likely to be killed in traffic accidents. Many streets in East Portland lack sidewalks. Helen Silvis photo.

Roads are important. They need to be maintained.  Agreed.

Commissioner Novick's proposal to levy a new street fee on all Portland residents and businesses  is another matter. Novick and some other commissioners say it is the only way to fix our roads. We disagree.

We pay transportation taxes to the federal government. We pay state taxes that include transportation costs. Those that use the roads, drivers and bicyclists, should pay for them.

But the last thing we need is another regressive local tax.

We've heard grumblings from supporters of the proposal. What's the problem, they say. It's a small price to pay for a city that works.

But is it really such a small fee?

Under the proposal discussed earlier this year, most families would pay $72 in the first year, rising to $144 in year three. That may seem like nothing to those in well-paid occupations --the voting classes. But the recent Multnomah County poverty study shows that thousands of families are struggling to pay rent and bills already.  Under discussion now is a plan to exempt anyone earning less than 30 percent of median income. But a family of two people with an income of just $15,100 a year makes above 30 percent of median income, and  would still have to pay.

As for businesses and nonprofits, the city is in discussions with those groups. But published figures suggest a 3,250 foot cafe could pay $360 a year on the low end rising to as much as $840 for the top estimate. Good luck getting sign-on for that.

Let's put it in context.  Federal taxes went up with the sunset of tax subsidies. Then voters passed the Arts tax, and the library bond. Water bills have shot up. Rents are rising. Many voters may not be overly negatively impacted by adding these fees. But low and middle-income families will be.

Find a way to fix roads within our budget or figure out how to charge those who use the roads. Regressive taxes are not in the best interests of the public.