Mayor Hales Speaks out on the Settlement with Capt. Mark Kruger 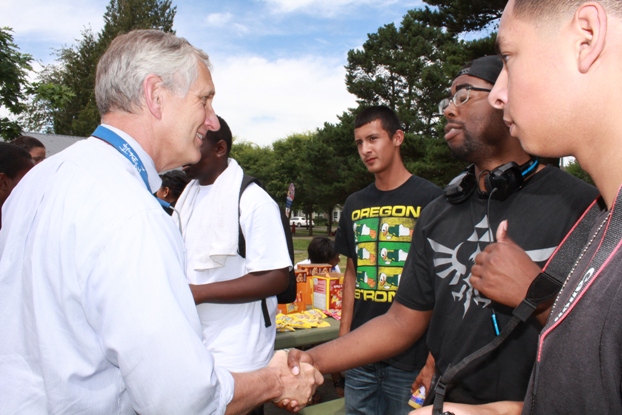 PHOTO: Portland Mayor Charlie Hales shakes hands with youth interns in the STRYVE program at a youth-led event to protest violence in the community.

Mayor Hales released this statement about a settlement announced between the City and Capt. Mark Kruger of the Portland Police Bureau. Kruger, who leads the bureau's Drugs and Vice division made a legal claim against the city over a series of text messages between a supervisor, Muke Kuykendall and a police officer Lt. Kristy Galvan. He claimed the messages slandered him. Kuykendall, who referred to Kruger in the texts as a "nazi," resigned after the texts became public. Kruger had been disciplined for installing a memorial plaque to five nazi officers on a tree in Rocky Butte in 1999.

On Wednesday, the community learned the details of a settlement between Capt. Mark Kruger and the City of Portland.

Community reaction has been outrage. I hear that outrage and agree with much of the substance of it. The issues involved bring up very personal, long-standing feelings of hurt and anger. These issues awaken our values as a community, especially where it comes to the behavior we expect from our public servants.

I do not minimize these feelings. The community has every right to feel this way.

The Portland City Council shares these values, as well as frustrations with this situation.

As mayor, I signed the settlement agreement. I am not happy with this settlement. I wish it had turned out differently. But it did not, and I take full responsibility for signing the document, making it a binding legal agreement. Mayors often must make distasteful decisions for the good of the city. This is one of those times.

My signature does not mean I condone, in any way, the actions of Capt. Kruger in 1999.

Instead, this complex settlement marks the end of multiple legal battles that have engulfed the city for more than a decade and involved four mayoral administrations. The constitutional issues present in the situation meant that past mayors were advised by counsel that the city might well have lost a court fight. I have been advised the same.

I’m not happy with the settlement. But I signed it. The final decision was mine.

Regarding the Portland Police and relationships with the community, we have implemented significant structural changes, including:

● The hiring of a more diverse workforce.

● Creation of a new discipline guide.

● Implementation of new rules of conduct regarding use of force.

We also have pushed forward with the implementation of reforms negotiated after a Department of Justice investigation, even though a judge has not yet ruled on the issue. We did not wait for the judge, but are working with the DOJ, the Police Bureau, and others in Portland to improve the relationship between the Police Bureau and the community.

Here’s what we have not done, but will do: Create a better process by which the details of major, important disciplinary issues – regardless of which bureau – are flagged for the attention of the full City Council. Currently, this process involves the City Attorney, Human Resources, the city’s Risk Management, the bureau and a single commissioner, but does not always include a full discussion with the full City Council. That will change.

I and other members of the Portland City Council intend to address that process immediately.

But in regards to the legal issue between the city and Capt. Kruger: The outrage felt by the community is right and just.

This case needs to be resolved. I take responsibility for ending the legal dispute about past performance, and for setting clear expectations for future performance in service to Portlanders.