Drug Treatment Guru: Cannabis Supporters Just Want to Get High and Sit on Couch All Day 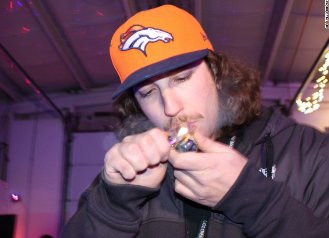 At first glance, my 11-year-old son seems like your everyday, all-American kid. He loves baseball and basketball, plays Xbox with his friends when they come over, and posts innocuous pictures of the family dog on his Instagram feed. Given these mundane facts about the boy, you can imagine my surprise when, while watching the news (again, seemingly from out of nowhere) he asked me, \"If pot is so bad, why are they trying to legalize it?\"

And, just like that, the long and involved talk my wife and I had given our children about drugs was tossed out the window.

We had explained the harmful effects of marijuana. Like cigarettes, smoking marijuana introduces tar, carbon monoxide and cancer-causing agents into your body.

Neither my wife nor I anticipated that our son would be stopped on the street by unscrupulous potheads petitioning outside of the local grocery store and being fed a line of rhetoric that went against what we were trying to teach him.

It turns out that potheads weren't exactly the problem; they were the symptom. Let me tell you why.

It's the same way with the argument about the legalization of marijuana. I'm not interested in focusing on the symptom; I want to eradicate the problem. And the problem is that we're even considering legalizing marijuana at all.

Let's take a look at the medical marijuana issue in Los Angeles (where I live) and we can see where legalization takes us. It has been my experience that anyone can get a medical marijuana card in L.A.; all you need is $25-$100 and the ability to lie about needing it. You just make an appointment with some company, walk in and state your problem(s) and why you need a card (with no proof of medical conditions whatsoever) and you will be prescribed a card that is good for one year. It's a toothless system that isn't well-regulated.

Why are some of the people who petition for legalizing marijuana so passionate about it? Because when you smoke pot, you get loaded. You fry your brain. That's why the patients I see in my treatment center call it \"getting baked." Pot is all about getting really high.

Now, I have nothing against people who smoke pot. In fact, I believe it is a crime to put someone in prison for smoking pot. Honestly, do we really need some idiot frat boy to get picked up during Mardi Gras for smoking pot and find himself locked in a cage with a monster for six months? Kevin Sabet, a former senior adviser to the White House Office of National Drug Control Policy poses a terrific point when he says that criminal processing for possession of marijuana needs improvement, but legalization is a step too far.

Marijuana supporters like to argue that marijuana is similar to alcohol. While alcohol is legal, it also accounts for tens of thousands of deaths every year in car accidents or other drinking-related misfortunes. But we can't turn the clock back on that one because it's too embedded in our society.

Supporters of marijuana say that marijuana should be legalized because old people and women and children who have ailments like glaucoma or cancer or intractable seizures need it.

It is painful to watch people suffer. I am not against helping people. In a perfect world, a woman suffering from cancer should be able to get a prescription from her doctor, go to a pharmacy, acquire her medical marijuana, go home and recuperate from her last round of chemotherapy. But we don't live in a perfect world, and you don't need a Ph.D. to see that the spirit of that argument is being exploited by people who aren't using the marijuana for medical reasons at all; they are using it to get high.

Introducing legalized marijuana into our culture would be like using gasoline to put out a fire, because it stunts growth.

Do you know why we don't see potheads out in public? It's because they're sitting at home smoking weed and staring at their television sets or playing video games all day. Do you have any idea how many marijuana addicts I encounter at my rehab on a daily basis? They talk about wanting to be productive. But what pot does is it kills their motivation -- it destroys people's ability to go out and work and to have a career. It makes them want to do nothing but lie around all day. Is that what you want for your children? Is that what you want for your loved ones?

And how do you market marijuana? We have only just now moved into an era where cigarette smoking is commonly known to be harmful, but now advertisers have a new product to sell. Who do you think they're going to market their product to? Not you or me, because we're not stupid enough to believe the lie; we know too much. They're going to follow in the footsteps of the cigarette companies in the 1980s and market this stuff to young people.

The very idea of that sickens me. I know what marijuana does to the human mind because I started smoking weed when I was 15 years old. It literally robbed me of my motivation to participate in my own life. I was absolutely OK with sitting around all day eating cookies and watching television and getting high with my friends. But, to go out and earn a living and do something with my life? That was all stuff that I was going to do later after I came down off of the marijuana. But, then I'd smoke some more and think, \"Why bother?" . . . and, eventually, I started shooting heroin. If my family had not intervened and sought professional help, I would probably still be wandering aimlessly through the streets today; searching for that elusive \"perfect high.\"

Even if you only stay with marijuana in your repertoire of illicit drugs to abuse, it will never yield positive results. Ever.

And, I posit this to marijuana abusers everywhere: Are you really that weak? Are you really that uncomfortable in your own skin that you can't handle living your life or having real experiences without being high? Is it really impossible for you to live life without a drug? Because, if it is, it breaks my heart and I feel sorry for you. Because that's no way to live.

And my kid, he's going to know the truth about you. He's going to know that every time you approach him arguing for the legalization of marijuana, what you're really doing is asking him to vote to make it OK for you to spend the rest of your life half-baked on your sofa, too stoned to go out and play with your own kids or do the things you've always dreamed of doing. To my kid, I'm going to say that this means one less competitor on his road to a successful and fulfilling life.

And, to the potheads who are so passionate about being allowed to smoke their lives away, I have only one thing to say: Dream On.

The opinions expressed in this commentary are solely those of Howard C. Samuels.