A. Bruce Crawley Special to the NNPA from the Philadelphia Tribune
Published: 09 November 2011 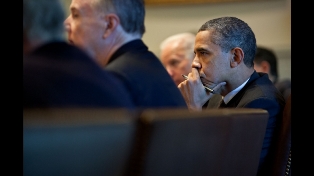 During a brief conversation at an event last week two apparently well-educated African Americans tried to carefully "explain" to me that President Barack Obama has no choice other than to ignore Black political issues because he wants of course to be re-elected and "there are more white voters than Black voters."

I was deeply disappointed by their easy acceptance of what has become a predictable pattern of second-class economic and political treatment for the Black community over the past few years. Not only did they seem willing to endure 16.2 percent Black unemployment levels (as long as it didn't include the loss of their own jobs, I guess) but they were also apparently resigned to having four more years of the same if that's what it will take to return the Obama family to the White House.

There are "more white voters than Black voters?" Is that what went through Harriet Tubman's mind as she fought to navigate the Underground Railroad and free Black slaves?

Did the fact that there were virtually no "legal" or unharrassed Black voters in many of the Southern states prior to the passage of the Voting Rights Act stop Blacks in those states from speaking out for what was fair and reasonable and for social and economic inclusion?

Did their lack of a voting majority ever stop Black Americans from expressing their outrage over having their men lynched by Klansmen?

Have African Americans ever had a voting majority in any national election in the history of this country anyway? Did that ever stop us from pressing our political issues?

What has happened to us? Why the recent complacency? How dare we try to characterize this curious new brand of self-defeatism and cowardice as "political sophistication?"â€¨

Have Jewish Americans ever "bitten their tongue" when they sought support for their issues — here or in Israel— simply because they represented less than 2 percent of the U.S. population?

Where did we learn this new politically spineless behavior?

As much as I and others have been critical of the "Occupy Wall Street" organizers for their lack of true inclusion of Blacks and other diverse economically desperate people, at least the "Occupiers" have demonstrated the courage to stand up for what they believe to be right.â€¨

Do you think they took a headcount to determine if they were outnumbered before they put up their tents?

So where do we get this from?

Some of those who have adopted this new laid-back voiceless form of African-American politics seem to be oblivious to how far we continue to fall behind collectively as we express blind support for a presidential administration that treats us as an annoyance.â€¨

It was the "hope" of many of us that President Obama would simply find a way to broaden the national dialogue so as to include 40 million African Americans to their full economic and social potential. â€¨

In the aftermath of the short-lived euphoria of 2008, however, what we have come away with — in addition to rampant African-American unemployment — is a recent report from the Federal Procurement Data System that informs us that Black-owned businesses received just 1.2 percent of all federal contracts in the fiscal year ended September 30 2011. To put that into context, Blacks constitute nearly 13 percent of the national population and own more than 7 percent of all U.S. businesses.â€¨

Adding insult to economic injury we also endured a $787 billion Stimulus Program that produced precious little business/contract stimulation in our community. Indeed nine months into the program $150 million in contracts had been let to companies for streets highway and bridge construction but "not a single dollar had been allocated to any African-American-owned business," according to the Transportation Equity Network.â€¨

Many of these economic disparities pre-dated Barack Obama, including the fact that only 14,500 of the nation's 1.9 million Black businesses report annual sales of $1 million or more or that 97 percent of Black firms report gross receipts of less than $250,000 per year.â€¨

But shouldn't the president using his bully pulpit establish a task force to explore why these challenges have existed for so long certainly not to disadvantage white Americans but rather to level the playing field once and for all.â€¨

Shouldn't we expect at least that much from a President to whom we gave 95 percent of our votes on Election Day in November 2008?

Here's the sad thing: We had grown to almost take for granted here in the U.S. dating back to the Kennedy Administration that our country would be working consistently if not always perfectly to bring about racial inclusion in the workforce and in the area of federal contract participation.

Then right after the 2008 election "post-racialism" broke out and all of those beliefs started to evaporate.

It's hard to believe that 2011 marks the 50th anniversary of the use of the term "affirmative action" by the U.S. government. It wasn't until March of 1961 that President Kennedy's Executive Order #10925 was introduced and the Committee On Equal Opportunity was created.

That was the one that mandated that all projects financed with federal funds "take affirmative action" to ensure that hiring and employment practices would be free of racial bias.

It's been 39 years since President Richard Nixon in his own Executive Order #11625 established the national Minority Business Enterprise (MBE) contracting program. In that same vein the 28 years since President Ronald Reagan issued Executive Order #12432 mandating each federal agency with substantial procurement authority to establish an MBE development plan seem to have just flown by.

And wasn't it just July 1995 (seems like only yesterday) when Bill Clinton after a 4 1/2- month review of federal affirmative action programs and under extreme political pressure from right-wing conservatives gave an historic public endorsement of the program by encouraging the nation to "mend it, don't end it?"â€¨

My, how some things have changed.

Unfortunately there's been a clearly evident and quantifiable shift in this country away from the spirit and letter of concepts such as "affirmative action," "equal opportunity," "minority business enterprise" and even "Black economic development."â€¨

Those who use such terms today in "polite company" risk being called "out of touch," being accused of "fighting a war that has already been won," and being branded as excessively hopelessly "politically correct." Right after those things are said, the term "playing the race card" is usually thrown in for good measure. There's also been the convoluted argument unsupported by any facts whatsoever of something called "reverse discrimination."â€¨

This is a monumental paradigm shift for this country and like all paradigm shifts the change in attitude that launched it has clearly "flowed down from the top."â€¨

We have a president who has consistently said to any media correspondent with a camera and microphone and to any Black person who has the courage to ask that he has no intention whatsoever of taking any action that would specifically correct years of economic disparities that still impact Black people and contribute directly to runaway Black unemployment levels.â€¨

Here's the question: If Mr. Obama doesn't want the responsibility, isn't there anyone else out there with the courage and skill set required to lead this nation in a fair, forceful and inclusive way?

Don't tell me that if the next president is not Barack Obama we may be stuck with a guy named Perry or a woman named Bachmann. There are more than 300 million Americans, 40 million of whom as I mentioned earlier happen to be Black.â€¨

Surely there must be at least one more capable person in this country who wants to do the job.â€¨