After 30 Years, AIDS Has Become a "Black Disease" 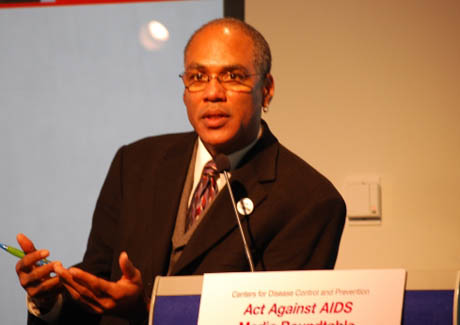 When AIDS was first detected 30 years ago, it was considered a White, gay man's disease.  In fact, it was known as GRID – gay-related immune deficiency.  Although African-Americans represent only 12.6 percent of the U.S. population, Blacks now represent almost half of all new HIV infections and nearly 50 percent of AIDS-related deaths.  What was once thought to be a "gay" disease has clearly become a "Black" disease.

Sunday will mark the 30thanniversary of the first public identification of AIDS.  To commemorate the anniversary, the Black AIDS Institute released a report on Thursday titled, 30 Years is Enuf: The History of the AIDS Epidemic in Black America.

The report is a comprehensive review of the past three decades, chronicling missed opportunities, failed government actions, a medical community that was slow to react, African-Americans who underestimated the scope of the disease in their community and dedicated community activists forcing health officials to tackle what would later become known as AIDS (acquired immune deficiency syndrome), the final stage of HIV.

"From the epidemic's earliest days, it was apparent that Black Americans were disproportionately affected by the epidemic," Phill Wilson, pictured above, founder and CEO of the Black AIDS Institute, wrote in the introduction to his organization's report. "Yet, the epidemic in its early years was consistently portrayed as a problem for white gay men.  Neither our national leaders, nor Black America itself, responded as they should have to the clear signs of an emerging health crisis among Black people."

Initially, medical experts were baffled by the new disease.

The Centers for Disease Control and Prevention  reported in its June 5, 1981 Morbidity and Mortality Weekly Report (MMWR): "In the period October 1980-May 1981, 5 young men, all active homosexuals, were treated for biopsy-confirmed Pneumocystis carinii pneumonia at 3 different hospitals in Los Angeles, California.  Two of the patients died.  All five had laboratory-confirmed previous or current cytomegalovirus (CMV) infection and candida mucosal infection."

In its editorial note, the CDC observed: "Pneumocystis pneumonia in the United States is almost exclusively limited to severely immunosuppressed patients.  The occurrence of Pneumocystosis in these 5 previously healthy individuals without clinically apparent underlying immunodeficiency is unusual.  The fact that these patients were all homosexuals suggests an association between some aspect of a homosexual lifestyle or disease acquired through sexual contact and Pneumocystis pneumonia in this population."

It would take another three years to identify HIV, the virus that causes AIDS.  Epidemiologists determined that HIV could be transmitted by men having sex with men, heterosexual couples, from infected women to their newborns, blood transfusions, and through contaminated needles. An estimated 1.1 million people live with HIV/AIDS today, including 500,000 African-Americans.

Although early attention was understandably focused on White, gay men, there was sufficient evidence – often ignored – that Blacks were disproportionately affected.

"One of the enduring myths of the epidemic is that AIDS almost exclusively affected white gay men in the U.S. during the early years," the Black AIDS Institute report states.  "In reality, AIDS had a disproportionate effect on Black America from the very beginning.  Representing just 12% of the U.S. population, Black people accounted for 26% of all cases reported in 1981-1983."

It continued, "Outside sub-Saharan Africa, only four countries have HIV prevalence as high as the conservative estimates of the HIV burden in Black America.  Indeed, were Black America its own country, it would have the 16thlargest number of people living with HIV, with levels of infection rivaling numerous countries in Africa."

In the early years, there was widespread ignorance about the disease.

"Because health officials and journalists used the phrase 'bodily fluids' instead of specifying semen, blood and vaginal secretions, many people feared they could contract AIDS from toilet seats or drinking fountains," wrote Lawrence K. Altman in the New York Times.

The first drug approved by the Food and Drug Administration to treat HIV infection was AZT, or zidovudine.  But a more effective class of antiretroviral drugs, called protease inhibitors, were developed in the mid-1990s.  Researchers discovered that by combining multiple classes of drugs, they could limit the viral replication process.  The combination treatment was called Highly Active Antiretroviral Therapy (HAART).

"Black America has benefited from treatment breakthroughs but not to the same extent as whites," the Black AIDS study observed.  "Indeed, evidence indicates that Black-white disparities in HIV-related medical outcomes have actually widened in the HAART era.  The sub-optimal HIV outcomes experienced by Black Americans stem from a combination of late diagnosis of HIV, inadequate health access, discontinuity of care, treatment adherence challenges, and a higher prevalence of other serious co-morbidities."

Over the years, public awareness increased in unexpected ways.

"The AIDS-related death of actor Rock Hudson in 1985 shocked the country and dramatically increased AIDS awareness," the Black AIDS Institute report noted.  "A similar effect resulted from the AIDS diagnosis in 1988 of tennis great Arthur Ashe, one of only two men to win a Grand Slam tournament.  Before his death in 1993, Ashe established a private foundation to fight AIDS.

"Public awareness of the AIDS crisis, especially in Black communities, underwent a sea change in 1991, when basketball great Earvin 'Magic' Johnson announced that he had tested HIV-positive. After his announcement, HIV testing rates in Black communities skyrocketed, as many Black Americans awoke to the reality that AIDS was not only a problem for gay men."

By then, however, AIDS had ravaged Black America.  The proof is in the numbers.

Although African-Americans represent 12.6 percent of the U.S. (13.6 percent when you include those who identify with more than one race), Blacks:


Figures for some groups are even more staggering.  Black women, for example, account for 61 percent of the HIV infections among women, nearly 15 times larger than the rate for White women.  Blacks aged 13-19 are only 17 percent of U.S. teenagers, they represent 68 percent of all new AIDS diagnoses among teens.  According to a five-city survey, 46 percent of gay and bisexual men were infected with HIV, compared to 21 percent of White men and 17 percent of Hispanics.

Thanks to President Obama, the United States has put into place its first national AIDS strategy. Its vision: "The United States will become a place where HIV infections are rare and when they do occur, every person, regardless of age, gender, race/ethnicity, sexual orientation, gender identity or socio-economic circumstance, will have unfettered access to high quality, life-extending care, free from stigma and discrimination."

According to the report, presidential leadership has been uneven over the past three decades.  It assigned grades to recent presidents.  Ronald Reagan earned an F, George H.W. Bush received a C, Bill Clinton got a B, George W. Bush was awarded a C-, and Barack Obama received an incomplete.

"As AIDS enters its fourth decade, there could be no more fitting tribute to the hundreds of thousands who have perished from this disease in the U.S. than to demonstrate that we have learned a lesson or two over the last 30 years," Phill Wilson wrote in the Black AIDS Institute report.  "In 2011, we have an extraordinary new opportunity to conquer AIDS.  Only bold wise action will get us where we need to go."