Donald Trump: Who Will Counter His Racist Remarks About Obama? 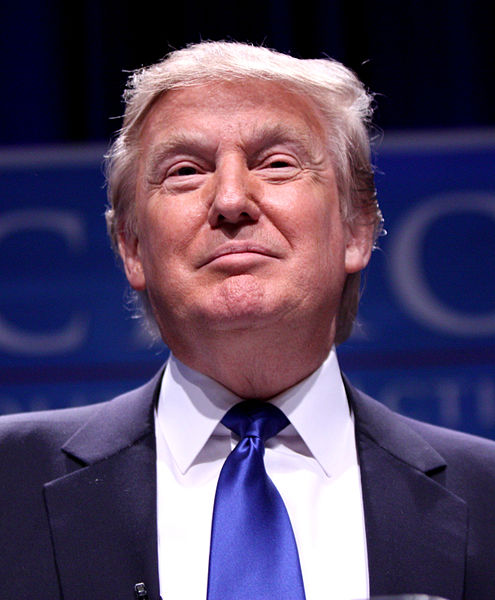 There is one area in which Donald Trump is no celebrity apprentice – racism.

After being exposed as a publicity-loving idiot after he questioned the authenticity of President Obama's birth records, Trump quickly shifted away from the discredited birther attack and began raising wild and unsubstantiated charges about Obama's academic achievement, a record that includes the future president finishing in the top 10 percent of his class at Harvard Law School and being elected president of the prestigious Harvard Law Review.

Although journalistic lapdogs are willing to parrot Trump's ridiculous and increasingly outlandish charges about President Obama, few have chronicled his racist behavior and comments.

Trump may have escaped scrutiny partly because he donated free office space to Jesse Jackson once upon a time and frequently makes the rounds with Snoop Dogg and P. Diddy.   In one of the few times he has been confronted about his racism, Trump told TMZ.com, "I am the last person that such a thing should be said about."

No, Donald, you should be one of the first.  And, I will tell you why.

One would never know that Trump ever hung out with African-Americans, judging by his language.

In a radio interview with Fred Dicker on Talk 1300 in New York, Trump complained about the difficulty Hillary Clinton had winning over Black voters.

"You'll hear a political reporter go on and say it had nothing to do with race.   But how come she had such a tiny piece of the vote?  And you know, it's a very sad thing," Trump said. "I have a great relationship with the Blacks.  I've always had a great relationship with the Blacks.  But unfortunately, it seems that, you know, the numbers you cite are very, very frightening numbers."

The Blacks?  Who uses that kind of language?  And Trump didn't just say it once – he said it twice.

Well, let's see how Trump treated the Blacks that he claims to have such a great relationship  with.

In 1973, the United States Justice Department sued Trump Management Corp. for violating the Fair Housing Act by refusing to rent to some potential tenants because of their "race or color."  Trump, who had taken over as president of the family business by then, reacted in typical Donald Trump fashion – he sued the government for $100 million, claiming the family business had been defamed.  The judge dismissed the suit, saying Trump and his lawyer, Roy Cohn, former chief counsel to Senator Joseph McCarthy, were "wasting time and paper."

Trump signed a settlement requiring that vacancies in the 15,000 apartment complex, which was approximately 95 percent White, must first be offered to people of color.  He agreed not to engage in further racial discrimination.   In a precursor of what was to come after Obama released his long-form birth certificate, Trump described his defeat as a victory and bragged that he was not required to "accept persons on welfare as tenants unless they qualified as any other tenant."

Three years later, the Justice Department hauled Trump back into court for violating the settlement by telling the Blacks they had no vacancies when, in fact, there were openings.

After a group of four African-Americans and one Latino, aged 14 to 16 years old, were arrested in 1989 for allegedly raping a White female jogger in Central Park, Trump took out a full-page ad in the New York Times calling for the death penalty.  That would have been a terrible mistake – all five teenagers were later exonerated.

John R. O'Donnell, former president of Trump Plaza Hotel & Casino, cited racist and anti-Semitic remarks made by his former boss.  In his book, Trumped, the former company official said Trump disparaged a Black accountant at Trump Plaza by asserting "laziness is a trait in blacks."   According to O'Donnell's book, Trump also said, "Black guys counting my money!  I hate it. The only kind of people I want counting my money are short guys that wear yarmulkes every day."

In an interview with Playboy magazine in 1999, Trump tried to dismiss O'Donnell as a loser, but acknowledged, "The stuff O'Donnell wrote about me is probably true."

Evidently not content stereotyping of Blacks and Jews who worked for him, Trump was inclined to reduce the president to being a Black athlete.

"If you look at what he's doing in Libya, which is a total disaster, nobody even knows what's going on in Libya," Trump asserted.  "If you look at what's happening with gasoline prices where he said he has no control over prices, which he does.  If he gets on the phone or gets off his basketball court or whatever he is doing at the time."

It turns out that while Trump was attacking Obama on Libya, for playing basketball, and raising false charges about Obama's birth certificate, the president was thoroughly engaged in planning a top-secret operation that would lead to the killing of Osama bin Laden.  It was Trump who didn't know what was going on.

In view of Trump's record, it is difficult to believe him when he says if he could do it all over, he would come back as an African-American.

He told Bryant Gumble as part of a two-hour television special on race: "If I was starting off today, I would love to be a well-educated Black because I really do believe they have the actual advantage today."

Not as much of the advantage enjoyed by a run-of-the-mill White male who inherited his wealth from his father.   By the way, Donald, there is a well-educated African-American in the White House.   And, look how you and those of your ilk are treating him.

George E. Curry, former editor-in-chief of Emerge magazine and the NNPA News Service, is a keynote speaker, moderator, and media coach. He can be reached through his Web site, www.georgecurry.com You can also follow him atwww.twitter.com/currygeorge.