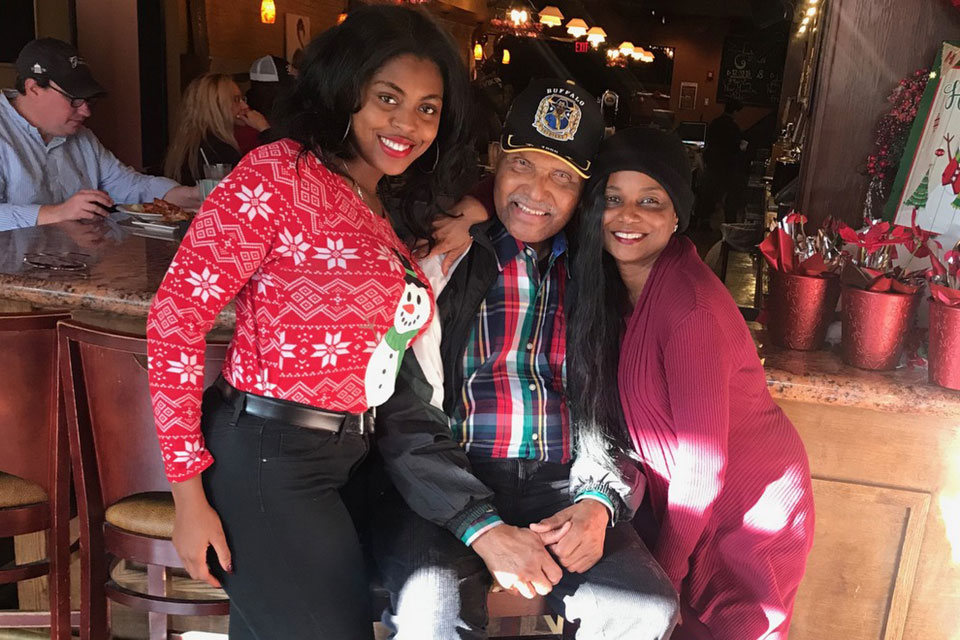 Even in the biggest fight of his life, Brookins remained a dedicated servant in so many walks of life, from the Association of the Study African American Life and History to church, to raising awareness on prostate cancer and lupus to showing up at every AFRO meeting and circulation day.

Brookins was not only a dedicated Army Officer with 20 plus years in the military, he also prioritized education.

He received a Bachelor of Arts degree in English Literature from Jackson State University. Brookins also completed the Armed Forces Staff College and the Command General Staff College, which is the equivalent of a master’s degree in civilian life.

Brookins was also a proud member of Omega Psi Phi Fraternity and was often seen rocking his purple and gold and doing impressive moves to “Atomic Dog.”

In addition to his active volunteer work with his fraternity and for Army veterans, Brookins was a member of the Association for the Study of African American Life and History (ASALH), Black Public Relations Society, National Association of Black Journalists (NABJ) and Veterans of Foreign Wars. With ASALH, Brookins remained an active member and served on communications and planning committees.

With all his beloved extracurricular activities, Brookins prioritized his love of God. Brookins was a member of the Ft. Myer Gospel Service and was the Communications Ministry leader, served on the Usher Board and Men’s Ministry and was an Adult Sunday School teacher.

Brookins even found himself leading collegiate classrooms. Brookins accepted an adjunct professor position at Lincoln University teaching a Senior Practicum Course in Print Journalism from 2014 to 2016.

Working with the AFRO kept Brookins booked and busy.

Having worked alongside him closely, this writer can testify that Brookins was the first in the office, sometimes arriving by 7 in the morning, and spent his days answering calls and emails, arranging coverage for events and working as the face of the paper for the Washington area.

For more than three decades, Brookins served the AFRO, working under several editors not only as a General and Circulation Manager, but also doing some writing and reporting himself, and helping plan large events.

Even after his retirement celebration in November of 2018, Brookins continued showing up daily and during the COVID-19 pandemic he tuned in, contributed, regularly volunteered to pray and was an active participant in the daily staff meetings.

He also continued assisting and coordinating editorial coverage in the District.

In addition to his work with the AFRO, Brookins used the latter years of his life to serve as an advocate for a number of health causes, including prostate cancer and lupus, both of which directly affected his life in major ways.

Brookins was first diagnosed with prostate cancer in 2016 and became an outspoken voice advocating for “brothers” to “get their annual screening from age 45 forward,” according to a biography Brookins wrote more than five years ago.

After the loss of his beloved daughter, Cierra, Brookins began a crusade for lupus awareness, donning wristbands, throwing events, and turning his birthday celebrations into a fundraiser for lupus research and treatment.

He founded the Cierra Brookins Lupus Educational Foundation in honor of his late daughter and to raise awareness about the disease.

Being a dad was Brookins pride and joy.  Brookins was the proud parent to three daughters, Tara, Angel and Cierra (deceased) and one son, Lt. Colonel Dexter Brookins, PhD. He also had a host of people he has mentored over the years, who considered Brookins as a father figure.

“He saved my life. God used him to bless me,” reporter and longtime Brookins mentee Andrea Young told the AFRO.

He also leaves to mourn a special significant other, Pamela Jenkins, a host of nieces and nephews, family, and friends.