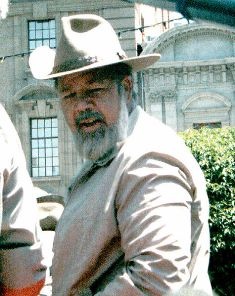 VENTERSDORP, South Africa (AP) -- The mother of a 15-year-old murder suspect said Monday that her son struck a notorious white supremacist leader with an iron rod after the farmer refused to pay him, a slaying that heightens racial tensions as South Africa prepares to host the World Cup.
"My son admitted that they did the killing," the mother said in an exclusive interview with AP Television News conducted in the Tswana language from her two-room cement home in Tshing township on the outskirts of Ventersdorp town.
She said she spoke to the teenager at Ventersdorp police station on Saturday after he turned himself in along with his alleged accomplice, a 28-year-old farm worker, following the slaying of Eugene Terreblanche.
Police have refused to identify either of the suspects by name. Under South African law, a minor accused of any charge cannot be identified without permission from a judge. The two have been charged with murder and will appear in court Tuesday, police said.
Officials appear anxious to show they are swiftly handling the crime, which comes just 10 weeks before South Africa becomes the first African nation to host the World Cup soccer tournament.
Terreblanche's slaying also comes at a time of heightened racial tension in this country once ruled by a racist white regime that only gave way to democratic rule in 1994 after years of state-sponsored violence and urban guerrilla warfare waged by the now-governing African National Congress.
Terreblanche's militant but small Afrikaner Weerstandsbeweging movement sounded a more conciliatory note Monday, withdrawing threats made Sunday to avenge his death. An AWB provincial leader, Pieter Steyn, told a news conference the movement renounces all forms of violence.
AWB members have blamed African National Congress Youth Leader Julius Malema, saying he spread hate speech that led to Terreblanche's killing.
Malema incited controversy last month when he led college students in a song that includes the lyrics "kill the Boer." Boer means farmer in Afrikaans, the language of descendants of early Dutch settlers, but also is used as a derogatory term for whites.
The song sparked a legal battle in which the ruling ANC party challenged a high court that ruled the lyrics as unconstitutional. The ANC insists the song is a valuable part of its cultural heritage and that the lyrics -- which also refer to the farmers as thieves and rapists -- are not intended literally and are therefore not hate speech.
"The death of Terreblanche has got nothing to do with the song. We know who Terreblanche was, his character and how he related with his workers. So the police must investigate and look out for the person who killed him," Malema said Monday while on a visit to neighboring Zimbabwe.
Terreblanche had previously been convicted for a brutal attack on two black farm workers and was sentenced to six years in prison.
At the farm Monday, a big grader was being used to dig a hole for Terreblanche in the family graveyard, where he is to be buried after a church service in Ventersdorp on Friday.
"This was such an unnecessary thing," Terreblanche's brother, Andries, told the AP, as he sat on a gray marble grave. "We are not racists, we just believe in purity of race."
Masked AWB "storm troopers" in uniforms terrorized blacks in the years leading up to majority rule. AWB's members still seek to create an all-white republic within mostly black South Africa. The group's red, white and black insignia resembles a Nazi swastika, but with three prongs instead of four.
The movement always has been on the fringes, estimated to have no more than 70,000 members at its height in the early 1990s out of a population of nearly 50 million.
The mother of the 15-year-old suspect, however, said Terreblanche was slain over a wage dispute. She said that when her son and his co-worker asked Terreblanche for their money, he told them first to bring in the cows. After they had brought in the cows they again asked for their money, which he then refused to give them.
"He said that the (laborer) man told him to wait while he went to the storeroom. He came back with an iron rod. He started hitting Terreblanche, with four blows to the head. Then my son says he took the iron rod and hit him with three blows," the mother said.
"My son was a person who doesn't like to be in trouble," she said softly, appearing a bit bewildered and scared.
AWB Secretary-General Andre Visagie said the 15-year-old suspect was a casual worker and that the 28-year-old man was a full-time employee who had been taking care of the garden of the family home in Ventersdorp. Terreblanche, 69, had been spending most of his time there since he had heart surgery a few weeks ago.
Police said Terreblanche was lying on his bed when he was attacked between 5 and 6 p.m. on Saturday.
The mother's account that there was only one murder weapon _ an iron rod _ did not fit police reports that a machete and a wooden staff with a rounded head were the murder instruments found at the scene.
Visagie said Terreblanche was bludgeoned so badly he was barely recognizable and described a gory murder scene indicative of great rage when he visited the farm on Sunday.
"There was blood all over the place, pools on the mattress, the pillow, the floor and splatters on the walls and ceiling," he said.