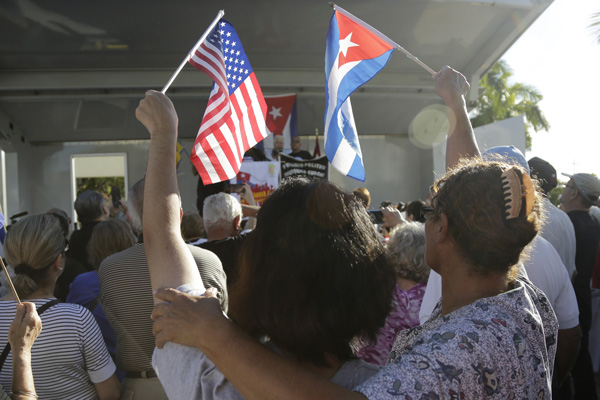 Protestors hold Cuban and American flags during a protest against President Barack Obama's plan to normalize relations with Cuba, Saturday, Dec, 20, 2014, in the Little Havana neighborhood of Miami. The last three members of the "Cuban Five" spy ring were freed this week in a sweeping deal that included the release of American contractor Alan Gross and a Cuban who had spied for the U.S. (AP Photo/Lynne Sladky)

Cuba has completed the release of 53 political prisoners that was part of last month's historic deal between the United States and Cuba, the Obama administration said Monday. The move would clear a major hurdle for the normalization of ties between the two countries after more than five decades of estrangement.

Cuba's leading human rights group said it had not been informed of any prisoner release since Thursday, when the total count stood at 41. The Cuban Commission on Human Rights and National Reconciliation has been keeping close track of the liberation of prisoners since they began last week, reporting releases within hours after hearing from family members or prisoners themselves.

The releases have been shrouded in confusion due to both a U.S. and Cuban reluctance to release the names of those on the list.

The prisoners had been on a list of opposition figures whose release was sought as part of the U.S. agreement last month with the Cuban government. They had been cited by various human rights organizations as being imprisoned by the Cuban government for exercising internationally protected freedoms or for their promotion of political and social reforms in Cuba.

Speaking in Louisville, Kentucky, President Barack Obama's U.N. ambassador said the prisoners were released in recent days. "Welcome as that step is, and heartening as it is for their families, (it) does not resolve the larger human rights problems on the island," Samantha Power said, according to prepared remarks.

Earlier, an official traveling with U.S. Secretary of State John Kerry in Islamabad said the U.S. verified the release.

Power was speaking Monday at an event hosted by Senate Majority Leader Mitch McConnell, R-Ky. She outlined issues which the administration and the Republican-led Congress could work together on and issues they remained further apart on.

Both sides want to advance freedom in Cuba, she said, but they disagree on strategy.

"Some of the embargo's staunchest defenders are Democrats and Republicans with deep ties to the island — people whose families came to America fleeing the Castros' repression," Power explained. "These are men and women who are completely dedicated to doing all they can to ensure that Cubans on the island get to enjoy true freedom. So it is important to acknowledge that while there may be disagreements on the best way to get there, we share a common goal of advancing the rights of the Cuban people."

Power said changes already are occurring in Cuba. When Cuban artist Tania Bruguera and other activists were detained after announcing an anti-government event in Havana's historic Revolution Square, she said, nearly 300 Cuban artists signed a letter supporting her freedom.

"In spite of genuine fear, Cubans were speaking out," Power said. "And the Castro government was forced to explain why it would rather arrest a woman than let her speak freely in a public square.

Last month, Cuba and the U.S. agreed to work to restore normal diplomatic relations as part of a deal in which Cuba freed an imprisoned U.S. aid worker along with an imprisoned spy working for the U.S. and the imprisoned dissidents. The U.S. released several Cuba intelligence agents.

"Certainly, for those 53 prisoners, it's a great deal. We don't know who they are," Sen. Marco Rubio, R-Fla., said in an appearance Monday on "CBS This Morning."

Rubio said he supports improving ties with Cuba but said he's worried that the Cubans are getting virtually everything they want from the United States for "these minimal changes."

He said he wants to be certain that improved relations between Washington and Havana provides equal benefits to the U.S.

"My interest in Cuba is freedom and democracy," he said. Rubio, a member of the Senate Foreign Relations Committee who's considering a run for the presidency, said there is "no current example" around the world where a "government of resistant tyranny" has moved to greater freedom and democracy as a result of changes in international relations that are based on economic incentives.