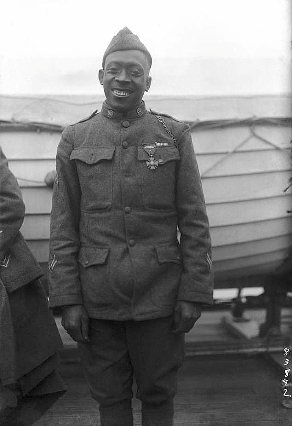 By Helen Silvis of The Skanner News
Published: 25 March 2011

The campaign to honor WW1 hero Sgt. Henry Lincoln Johnson with a Medal of Honor has made a major breakthrough, with the discovery of crucial new evidence. As previously reported by The Skanner News, Johnson's incredible bravery on the battlefield earned him the Croix de Guerre, with gold palm, France's highest honor.

Yet the Albany N.Y. railroad porter who fought with the fearsome Harlem Hellfighters regiment – the New York 369th – went unrecognized back home in the United States. The reason? Johnson was Black at a time when America was in the grip of race segregation and racist violence.

"We found additional evidence that further confirms what we already know to be true," said Oregon Sen. Ron Wyden. "That Mr. Johnson is a hero and deserves the Congressional Medal of Honor."

New Evidence of Johnson's Exceptional Courage
Sen. Wyden took up the case after learning about Johnson from Portland City Commissioner Nick Fish, whose grandfather Hamilton Fish was an officer in the 369th and a strong advocate for civil rights. He has been working with New York Sen. Charles Schumer, who last week announced the discoveries his staff had made: a memo from Gen. John Pershing, Commander in Chief of the European forces; an eyewitness account by the soldier Johnson rescued; and a letter to Johnson's wife from Johnson's commanding officer Col. James Hayward.

Staffers found the memo from Gen. Pershing in the National Archives, part of a May 1918 bulletin from the front lines command center.
Gen. Pershing wrote:
"Reports in hand show notable instance of bravery and devotion shown by 2 soldiers of American colored regiment operating in French sector. Before day light on May 15 Private Henry Johnson and Private Roberts while on sentry duty at some distance from one another were attached by German raiding party estimated at 20 men, who advanced in 2 groups attacking at once from flank and rear. Both men fought bravely in hand to hand encounters, one resorting to use of bolo knife after rifle jammed and further fighting with bayonet and butt became impossible. Evidence that at least one and probably second German was severely cut. Third known to have been shot. Attention drawn to fact that the 2 colored sentries first attacked continued fighting after receiving wounds, and despite of use of grenades by superior force, and should be given credit for preventing by their bravery the taking prisoner of our men. Three of our men wounded, of whom two by grenades but all are recovering, and wounds in two cases are slight."

Campaigners Are Hopeful
The memo that has just been unearthed signed by Gen. Pershing is a game-changer, Fish said.

"This is very exciting. There is every reason to hope that it could be resolved within the year. With Obama in the White House and with Sens. Schumer and Wyden pressing the case, based on this new information, I think we all are very encouraged that we are one giant step closer to Sgt. Johnson receiving –after almost 100 years – the Medal of Honor.
"The Army has what it needs and what it specifically requested and it is new information. The Army set a very high bar and it looks like we will be able to meet it."

Standing in front of a statue of Sgt. Johnson in the New York capitol, Sen. Schumer told reporters from the Albany Times Union that the memo from Gen. Pershing adds considerable weight to the campaign, because it shows the chain-of-command endorsement required by the Army.
"Henry Johnson remains an incredible example of bravery and patriotism today, and it is time that he receive his long overdue Medal of Honor," Schumer says in his press release.
"One of the requirements for this award is a chain-of-command endorsement, and it doesn't get better than the commander of American forces during WWI, General John J. Pershing. …During the 'Battle of Henry Johnson', there is no doubt that this American soldier displayed the extraordinary bravery and self-sacrifice that is at the core of this incredible honor. I urge the Army to reopen Johnson's case, and grant him the recognition he earned so many years ago."

Tough Requirements
The Times-Union story notes that Sen. Schumer will present the new evidence to Army Sec. John McHugh, a former New York congressman and a friend of Schumer's.
The US Army recommends the Medal of Honor for member of the armed services whose action are distinguished "conspicuously by gallantry and intrepidity at the risk of his or her life above and beyond the call of duty." To receive the medal, the action on the part of a soldier must be one of "personal bravery or self-sacrifice so conspicuous as to clearly distinguish the individual above his or her comrades and must have involved risk of life."
A second critical piece of evidence is Private Roberts' eyewitness account of the fight, published in a pamphlet. Roberts confirms that Johnson repelled the attackers with his bolo knife and rescued Roberts. An eyewitness account is required to receive the Medal of Honor.
The third new piece of evidence is a letter written by Col. William Hayward. Staffers from Schumer's office discovered the letter was read into the Congressional Record on September 4, 1918, giving it added significance and legitimacy.
Col. Hayward wrote to Johnson's wife:
"Your husband, Pvt. Henry Johnson... has been at all times a good soldier... of fine morals and upright character. To these admirable traits he has lately added the most convincing proof of fine courage and splendid fighting ability. I regret to say that he is at the moment in a hospital, seriously, but not dangerously, wounded, the wounds having been received under such circumstances that everyone of us in the regiment would be pleased and proud to trade places with him."

Almost 100 years Later The Fight Continues
Over the years campaigners have sought the Medal of Honor for Sgt. Johnson, including: Johnson's son, Tuskegee Airman Herman Johnson; Vietnam Veteran John Howe; former N.Y. Rep. JoeDio Guardi; and former N.Y. state Rep. Michael McNulty. In 1996, long after his death, he finally received the Purple Heart. In 2003, Schumer helped campaigners obtain the Distinguished Service Cross for Johnson in 2003. But the injustice still rankled. After all, Johnson's stupendous bravery under attack is the stuff of legend.
Staff from Schumer's office discovered Col. Hayward's letter had been read into the Congressional Record on September 4, 1918, giving the letter more significance and legitimacy.
Richard Slotkin, professor emeritus of American Studies at Wesleyan University, and author of 'Lost Battalions: The Great War and the Crisis of American Nationality' said Gen. Pershing's words will carry weight.
"Of particular importance is his confirmation that the two soldiers continued to fight after being wounded, and defeated a force vastly superior in numbers (20 against 2) and weaponry. The purpose of raids like this one was to capture prisoners for interrogation, which meant that the raiders were required to close in for hand-to-hand combat, so the fighting was intense. Johnson and Roberts not only prevented their own capture, they prevented the capture of the other men in the position who were unable to fight. The French considered their actions worthy of the Croix de Guerre."

WW1 Changed Johnson's Life For Ever
When Johnson returned to the United States after these life-changing events, his wounds, both physical and psychological, proved difficult to overcome. His marriage fell apart. He took to drinking heavily. He tried, but failed, to get VA benefits. Just over 10 years later, he died, penniless. He is buried in Arlington National Cemetery.