GOP Hopefuls Find Some Issues a Hazard Early On 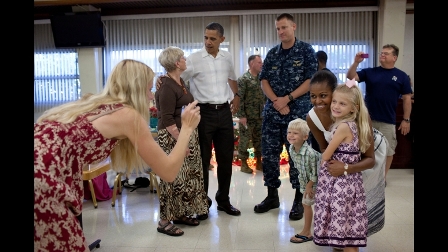 WASHINGTON (AP) -- This month's early, under-the-radar campaigning by potential Republican challengers to President Barack Obama is a reminder of something too easily forgotten: Running for president is harder than it looks, and Obama ultimately will stand against a flesh-and-blood nominee certain to make mistakes along the way.

Mitt Romney, Tim Pawlenty and other possible GOP candidates stumbled over health care, taxes and other issues in December, even as Obama coped with the harsh political reality stemming from his party's ``shellacking'' in last month's elections.

No serious contender has officially launched a 2012 campaign. But with the Iowa caucuses less than 13 months away, at least a dozen Republicans are jockeying for position, speaking to groups throughout the country, writing op-ed columns and taking potshots at one another.

As all politicians learn, the more deeply they delve into contested issues, the likelier they are to stumble.

Sen. John Thune, R-S.D., got caught in the middle of his party's quickly changing views about congressional earmarks, the pet projects that some lawmakers sprinkle throughout big spending bills. Earlier this year he tucked more than $100 million in earmarks into a massive year-end spending bill that many had expected to pass.

But after tea party successes in the Nov. 2 elections, elected Republicans swung hard against earmarks and pork-barrel spending. At a Dec. 15 news conference in the Capitol, Thune came uncomfortably close to echoing Sen. John Kerry's infamous line about voting for an $87 billion bill ``before I voted against it.''

Thune told reporters, ``I support those projects, but I don't support this bill, nor do I support the process by which this bill was put together.''

Meanwhile, Romney was put on the spot when a federal judge ruled that Obama's health care law is unconstitutional because it requires everyone to buy health insurance. Romney included virtually the same mandate in the 2006 health law he enacted as Massachusetts governor.

Romney took pains to say his plan was different from Obama's, mainly because it took a one-state approach rather than a federal one-size-fits-all solution. Pawlenty aides note that the Minnesota governor rejected such mandates in his state.

But Pawlenty had his own problems this month. In a Wall Street Journal column, he said most labor union members now work for governments, which Obama has rendered ``the only booming industry left in our economy.'' Since January 2008, he wrote, ``the private sector has lost nearly 8 million jobs while local, state and federal governments added 590,000.''

The nonpartisan research group PolitiFact gave the column its worst rating for accuracy, ``pants on fire.'' The group said Pawlenty mangled the time frame, contradicted his definition of federal workers and ``repeated a statistic that had been criticized as inaccurate as long as six months ago.''

Pawlenty's office said he based the statistics on a June article by Veronique de Rugy, a senior research fellow at George Mason University, on the Big Government website run by conservative activist Andrew Breitbart. After reviewing the article, PolitiFact said it stood by its analysis that ``the 590,000 number doesn't encapsulate the time frame or definition set out by Pawlenty,'' and it is ``still skewed by a large bump in temporary Census jobs.''

Former Arkansas Gov. Mike Huckabee didn't have an easy December either. Writing about the much-debated proposal to ``cap and trade'' greenhouse gas emissions, Huckabee said, ``I never did support and never would support it, period.''

But at an October 2007 meeting of the Global Warming and Energy Solutions Conference in New Hampshire, Huckabee said: ``I also support cap and trade of carbon emissions. And I was disappointed that the Senate rejected a carbon-counting system to measure the sources of emissions, because that would have been the first and the most important step toward implementing true cap and trade.''

Addressing the contradiction, Huckabee said it is fine for companies to voluntarily engage in cap and trade. ``But I was clear that we could not force U.S. businesses to do what their Chinese counterparts refused to,'' he said.

Mississippi Gov. Haley Barbour, meanwhile, felt compelled to issue a statement last week calling racial segregation ``totally indefensible.'' It came a day after liberal bloggers said he went too easy on anti-integration forces in recent remarks about the desegregation of his hometown's public schools in 1970.

Other potential GOP challengers, including former Alaska Gov. Sarah Palin and former House Speaker Newt Gingrich, kept fairly low profiles this month. But it's clear the 2012 race is under way, even if unofficially.

White House press secretary Robert Gibbs was asked about Palin's and Romney's criticism of the New START treaty with Russia and the compromise bill on tax cuts, both supported by Obama.

``There will be great pressure to do otherwise, as people begin running for president,'' Gibbs added. ``There will be plenty of time with which to conduct a presidential election in the fall of 2012.''

The past few days have made that time seem a lot closer.