In D.c. Mayor's Race: Momentum Shifts to Gray As Fenty Struggles to Hold On

James Wright Special to the NNPA from the Afro-American Newspapers
Published: 16 July 2010 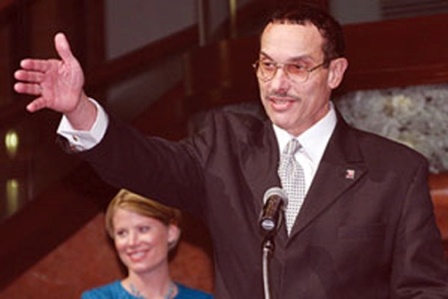 WASHINGTON (NNPA) - The D.C. mayor's race has undergone a shift in recent weeks with the incumbent on the defensive in his bid for re-election and his primary challenger racking up endorsements across the board.
Washington insiders contend that D.C. Mayor Adrian Fenty has lost touch with many District residents and his chief opponent, D.C. Council Chairman Vincent Gray (D), has managed to capitalize on the mayor's weaknesses. Fenty, 39, Gray and former TV reporter Leo Alexander are considered viable contenders in the Sept. 14 Democratic Party nomination for mayor.
"It would seem that Chairman Gray is out in the public and is willing to have a conversation and dialogue about where the city should go," said Jeffrey Richardson, president of the Gertrude Stein Democratic Club, the city's leading gay, lesbian, bi-sexual and transgender political organization.
"Gray is talking to the broader community and Fenty is not connecting."
The Gertrude Stein Democratic Club endorsed Gray for mayor last month. The organization's endorsement has long been considered the brass ring in Democratic circles, due to the organization's political clout and their willingness to donate money, volunteer and turnout in droves to vote for their candidates.
Richardson, 32, said that his membership is committed to seeing that "Gray is our next mayor."
A further sign of Fenty's weakness is that he has about $3.1 million in his campaign war chest but was surpassed by Gray, 67, in the last quarter according to the D.C. Office of Campaign Finance records.
A straw poll taken by the Ward 3 Democratic Committee didn't bode well for the mayor, either. Officials from the organization released the results, last month, which showed Gray edging Fenty, 174-168, and Alexander, 46, getting four votes and 11 undecided.
The Ward 3 Democratic Committee didn't issue an endorsement because no candidate got the requisite 75 percent of the membership for an official nod.
However, Gray, received 40 votes to Fenty's 15, Alexander's one and six voters stated no preference, an upset in the sense that Ward 3 is considered Fenty's political base. The Ward 3 Democrats' non-endorsement is a troubling development, said Ronald Walters, a noted political scientist.
"Adrian Fenty is losing a lot of support in Ward 3," Walters said. "He blew a lot of goodwill that he had, particularly among Whites. His style of governance is perceived as arrogant and dismissive."
Gray crushed the mayor in a city-wide straw poll conducted by the D.C. Democratic State Committee, Sat., June 12. The chairman received 703 votes while Fenty, once a darling of the organization, got 190 votes and Alexander trailed with 75.
The mayor's no-show at a forum billed as the "The Great Education Debate" hosted by the Young Education Professionals on Monday, June 28 further enraged both his critics and his supporters. The highly anticipated one-on-one debate regarding the candidates' vision for education in the District even caused a major daily to take pause.
The editorial page of the Washington Post, a publication many consider friendly toward Fenty, took the mayor to task for his total disregard.
Gray's success comes as no surprise to Anthony Rice.
"I am wondering what took him so long to get into the mayor's race," Rice said. "I am not really happy with Fenty. There were changes in the city that I thought were going to take place but have not. I expected him to do more to get jobs for people," the married father of three said.
Rice, a Northwest resident, said that "it seems that Fenty is catering to a certain demographic."
Walters added that Fenty's insistence on paying for streets cars instead of aiding the city's low and middle income residents appears to be hurting him.
Many Black residents are turned-off by D.C. Schools Chancellor Michelle Rhee and his cronyism regarding city contracts. Gray is benefitting from being a credible alternative to the mayor, Walters said.
"Vincent Gray does not turn-off Whites and has a strong Black base."
Rice added a somewhat light wrinkle to the mayor's race.
"I have not made up my mind [as to] who I will support. I will think long and hard about it, but if Marion Barry got into the race, I would vote for him again," Rice said, with a mischievous grin.