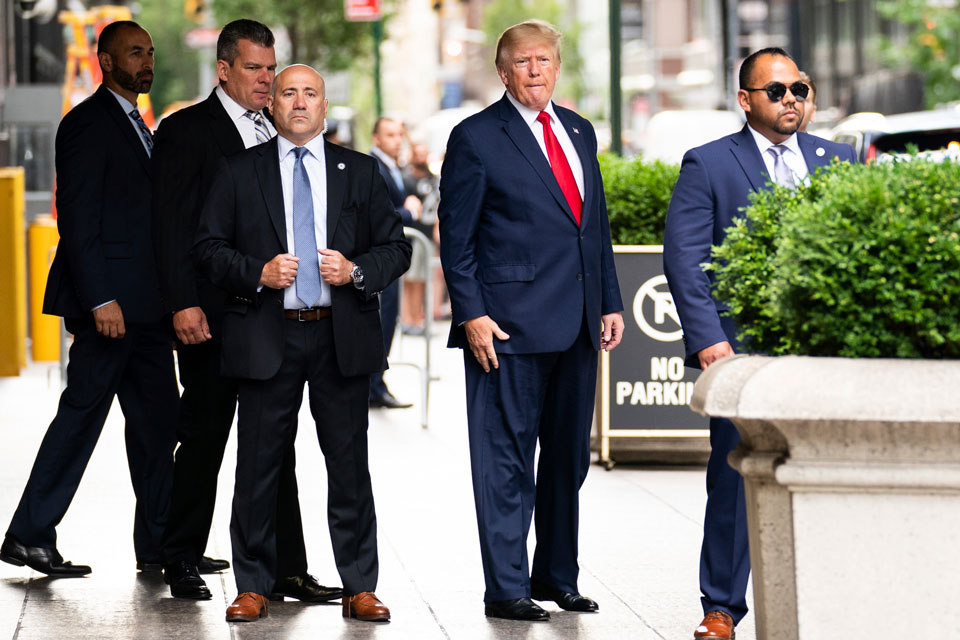 WASHINGTON (AP) — The House Jan. 6 committee’s final report asserts that Donald Trump criminally engaged in a “multi-part conspiracy” to overturn the lawful results of the 2020 presidential election and failed to act to stop his supporters from attacking the Capitol, concluding an extraordinary 18-month investigation into the former president and the violent insurrection two years ago. 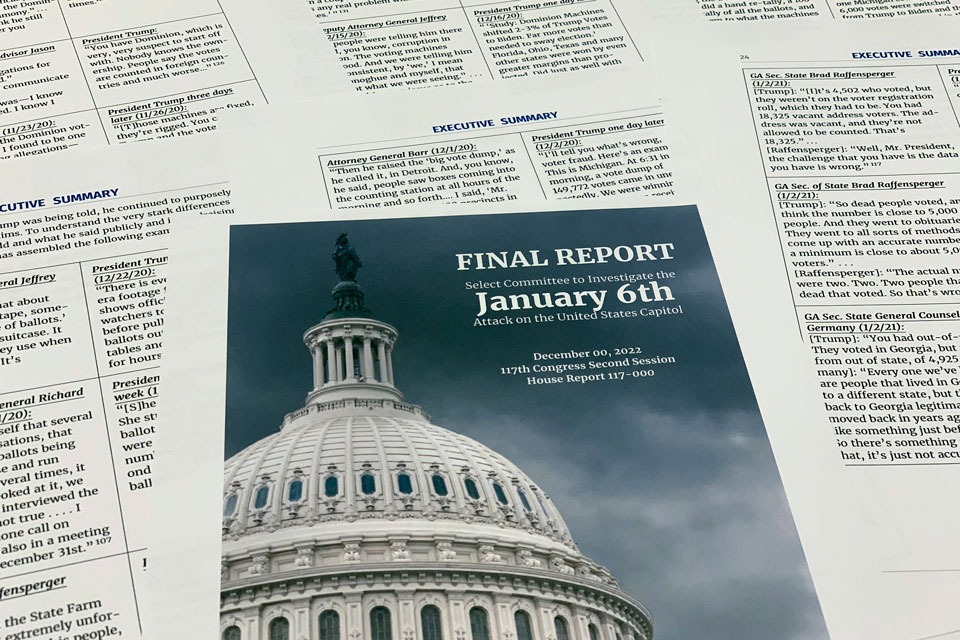 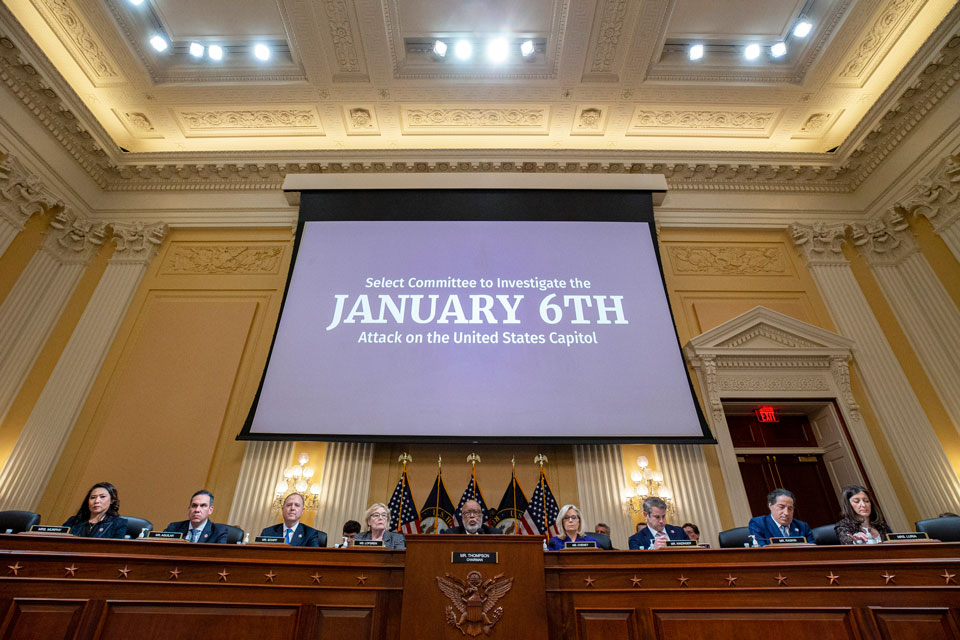 Chairman Bennie Thompson, D-Miss., speaks as the House select committee investigating the Jan. 6 attack on the U.S. Capitol holds its final meeting on Capitol Hill in Washington, Monday, Dec. 19, 2022. From left, Rep. Stephanie Murphy, D-Fla., Rep. Pete Aguilar, D-Calif., Rep. Adam Schiff, D-Calif., Rep. Zoe Lofgren, D-Calif., Thompson, Vice Chair Liz Cheney, R-Wyo., Rep. Adam Kinzinger, R-Ill., Rep. Jamie Raskin, D-Md., and Rep. Elaine Luria, D-Va. (Al Drago/Pool Photo via AP)The 814-page report released late Thursday comes after the panel interviewed more than 1,000 witnesses, held 10 hearings and obtained more than a million pages of documents. The witnesses — ranging from many of Trump’s closest aides to law enforcement to some of the rioters themselves — detailed Trump’s “premeditated” actions in the weeks ahead of the attack and how his wide-ranging efforts to overturn his defeat directly influenced those who brutally pushed past the police and smashed through the windows and doors of the Capitol on Jan. 6, 2021.

The central cause was “one man,” the report says: Trump.

The insurrection gravely threatened democracy and “put the lives of American lawmakers at risk,” the bipartisan nine-member panel concluded, offering a definitive account of a dark chapter in modern American history. It functions not only as a compendium of the most dramatic moments of testimony from months of hearings, but also as a document that is to be preserved as a warning for future generations.

In a series of recommendations, the seven Democrats and two Republicans on the committee suggest that Congress consider barring Trump from holding future office. The findings should be a “clarion call to all Americans: to vigilantly guard our Democracy and to give our vote only to those dutiful in their defense of our Constitution," says House Speaker Nancy Pelosi in a foreword to the report. 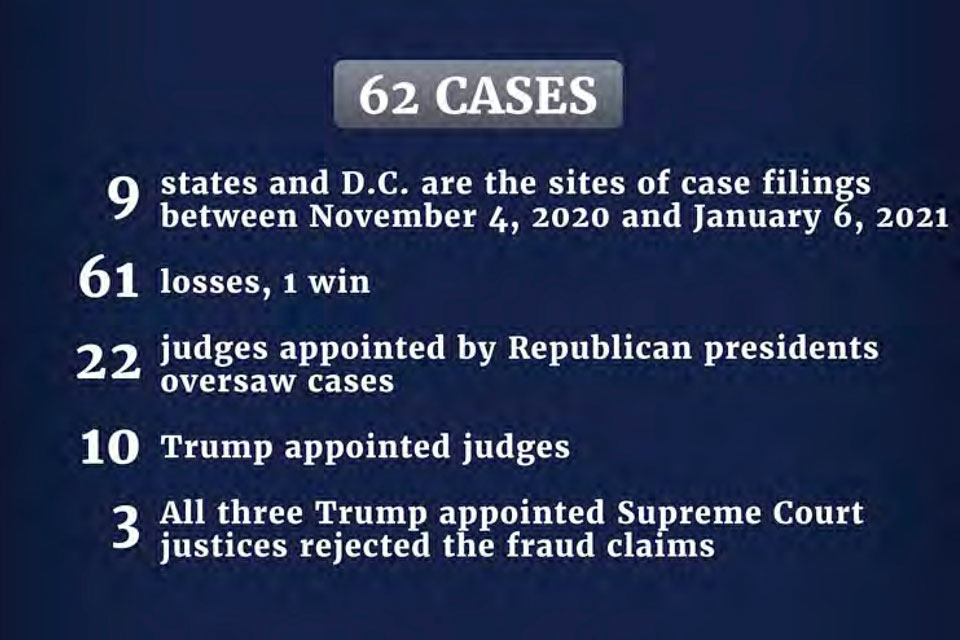 This image released in the final report by the House select committee investigating the Jan. 6 attack on the U.S. Capitol, on Thursday, Dec. 22, 2022, shows a graphic of the number of court cases President Donald Trump and his team filed after the 2020 presidential election. (House Select Committee via AP) 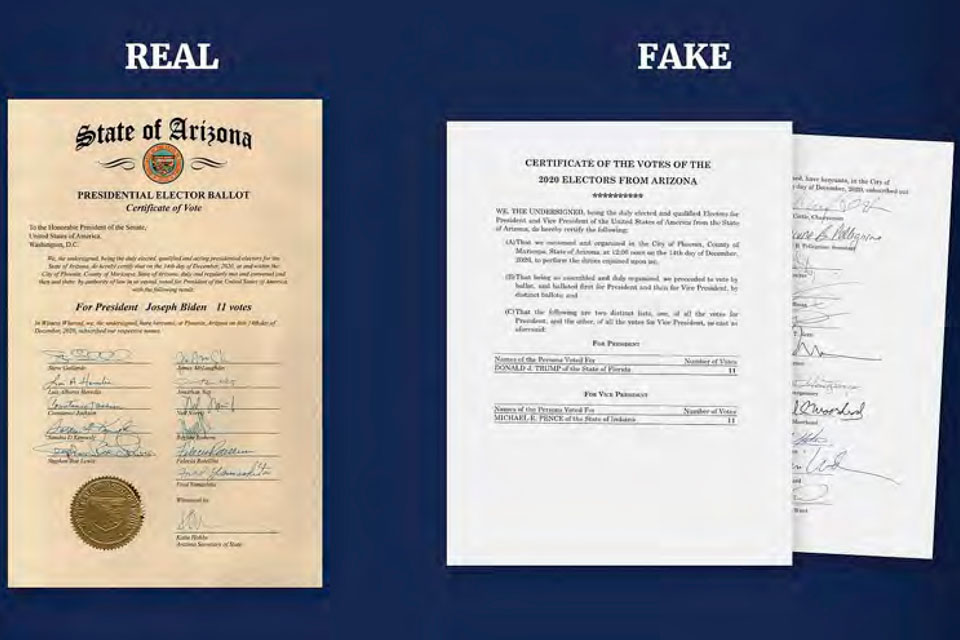 This image released in the final report by the House select committee investigating the Jan. 6 attack on the U.S. Capitol, on Thursday, Dec. 22, 2022, shows a graphic that illustrates the difference between real and fake Presidential Elector Ballots from Arizona. (House Select Committee via AP)The report’s eight chapters tell the story largely as the panel’s hearings did this summer — describing the many facets of the remarkable plan that Trump and his advisers devised to try and void President Joe Biden’s victory. The lawmakers detail the former president's pressure on states, federal officials, lawmakers and Vice President Mike Pence to game the system or break the law.

In the two months between the election and the insurrection, the report says, “President Trump or his inner circle engaged in at least 200 apparent acts of public or private outreach, pressure, or condemnation, targeting either State legislators or State or local election administrators, to overturn State election results.”

Trump's repeated, false claims of widespread voter fraud resonated with his supporters, the committee said, and were amplified on social media, building on the distrust of government he had fostered for his four years in office. And he did little to stop them when they resorted to violence and stormed the Capitol, interrupting the certification of Biden's victory.

The massive, damning report comes as Trump is running again for the presidency and also facing multiple federal investigations, including probes of his role in the insurrection and the presence of classified documents at his Florida estate. This week is particularly fraught for him, as a House committee voted to release his tax returns after he has fought for years to keep them private. At the same time, Trump has been blamed by Republicans for a worse-than-expected showing in the midterm elections, leaving him in his most politically vulnerable state since he was elected in 2016.

Looking forward, the committee makes several suggestions for action, including an overhaul of the Electoral Count Act, the election law that Trump tried to circumvent. Bipartisan legislation to make it harder for lawmakers to object to presidential results, and for the vice president to intervene, is set to be passed as part of year-end spending legislation on Friday and sent to Biden for his signature.

The panel also notes in that section that the 14th Amendment to the U.S. Constitution holds that anyone who has taken an oath to uphold the Constitution can be prevented from holding office for engaging in insurrection or rebellion.

Posting on his social media site, Trump called the report “highly partisan” and falsely claimed it didn’t include his statement on Jan. 6 that his supporters should protest “peacefully and patriotically.” The committee did include that statement, noting that he followed it with election falsehoods and charged language exhorting the crowd to “fight like hell.” 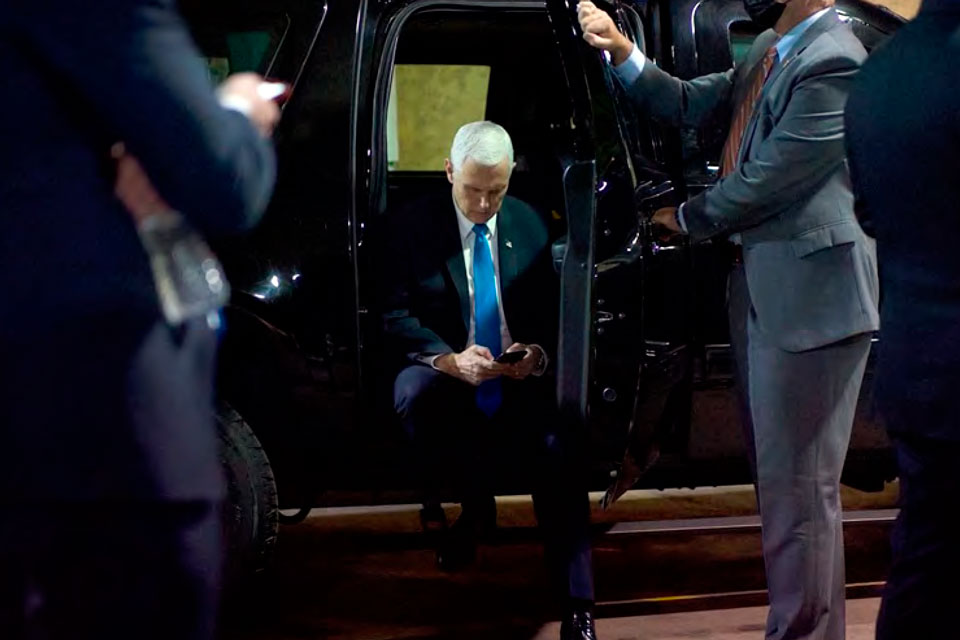 In this image released in the final report by the House select committee investigating the Jan. 6 attack on the U.S. Capitol, on Thursday, Dec. 22, 2022, Vice President Mike Pence looks at a mobile device from a secured loading dock at the U.S. Capitol on Jan. 6, 2021. (House Select Committee via AP)The report details a multitude of failings by law enforcement and intelligence agencies, noting that many of the rioters came with weapons and had openly planned for violence online before they overwhelmed underprepared law enforcement. “The failure to sufficiently share and act upon that intelligence jeopardized the lives of the police officers defending the Capitol and everyone in it,” the report says.

At the same time, the committee makes an emphatic point that security failures are not the primary cause for the insurrection.

“The President of the United States inciting a mob to march on the Capitol and impede the work of Congress is not a scenario our intelligence and law enforcement communities envisioned for this country," Thompson wrote.

“Donald Trump lit that fire," Thompson writes. "But in the weeks beforehand, the kindling he ultimately ignited was amassed in plain sight.” 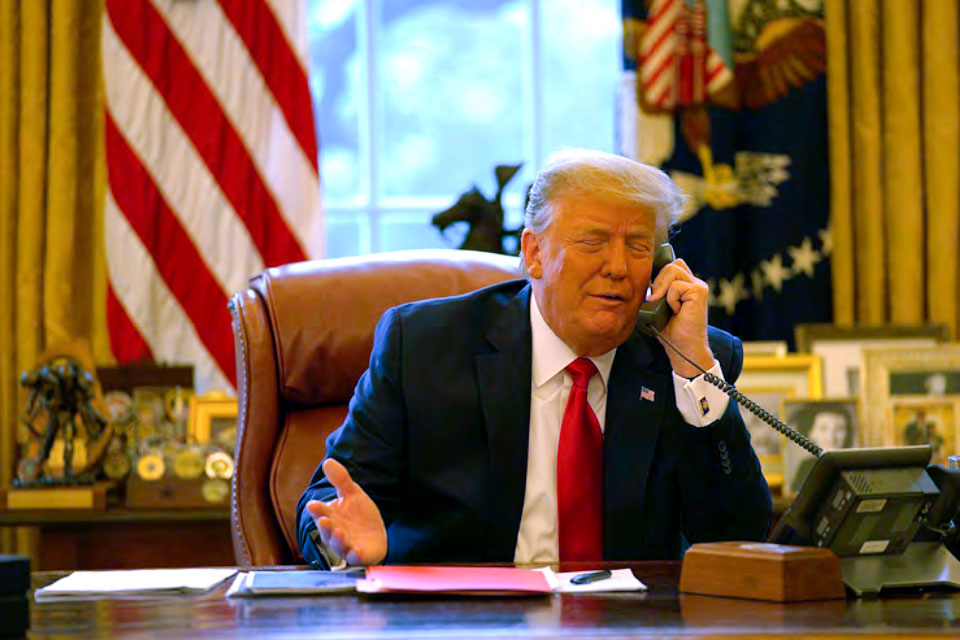 In this image released in the final report by the House select committee investigating the Jan. 6 attack on the U.S. Capitol, on Thursday, Dec. 22, 2022, President Donald Trump talks on the phone to Vice President Mike Pence from the Oval Office of the White House on Jan. 6, 2021. (House Select Committee via AP) 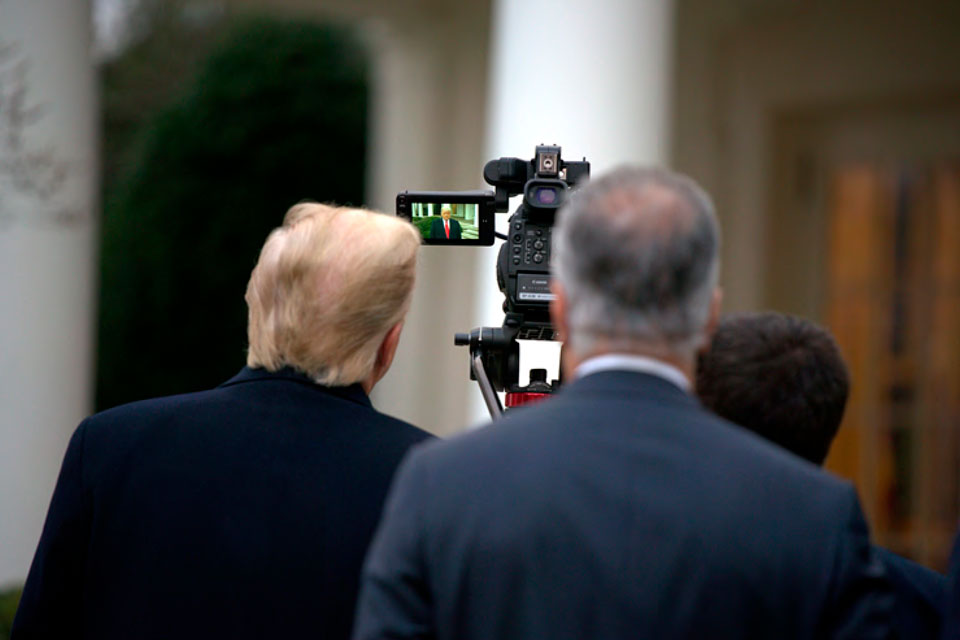 This image released in the final report by the House select committee investigating the Jan. 6 attack on the U.S. Capitol, on Thursday, Dec. 22, 2022, shows President Donald Trump looking at a recording of a video statement he filmed on the afternoon of Jan. 6, 2021, from the Rose Garden of the White House in Washington. (House Select Committee via AP)The report details Trump’s inaction as his loyalists were storming the building, detailing the hours when he watched the violence on television but did nothing to stop it.

A White House photographer snapped a picture of Trump at 1:21 p.m., learning of the early violence from an employee upon returning to the White House after his speech — after his own security officials had rebuffed his efforts to go to the Capitol himself. “By that time, if not sooner, he had been made aware of the violent riot,” the report states.

In total, 187 minutes elapsed between the time Trump finished his speech at the Ellipse and his first effort to get the rioters to disperse, through an eventual video message hours later in which he asked his supporters to go home even as he reassured them, “We love you, you’re very special.”

That inaction was a “dereliction of duty,” the report says, noting that Trump had more power than any other person as the nation's commander-in-chief. "He willfully remained idle even as others, including his own Vice President, acted.”

During those hours, Pence huddled and hid in the Capitol, begging security officials for a quicker National Guard response as rioters outside called for his hanging because he would not illegally try to thwart Biden's win as Congress was counting the votes. Inside the White House, dozens of staffers and associates pleaded with Trump to make a forceful statement.

But he did not. 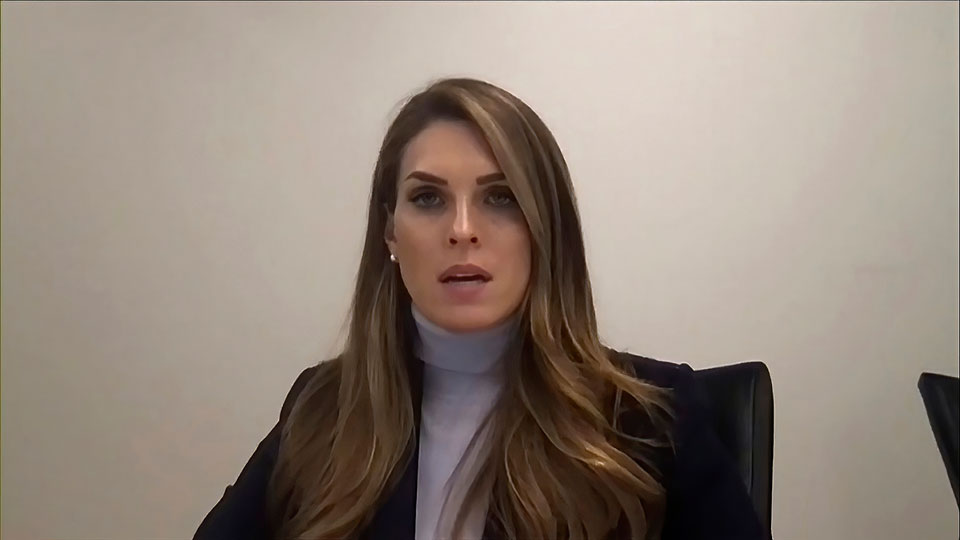 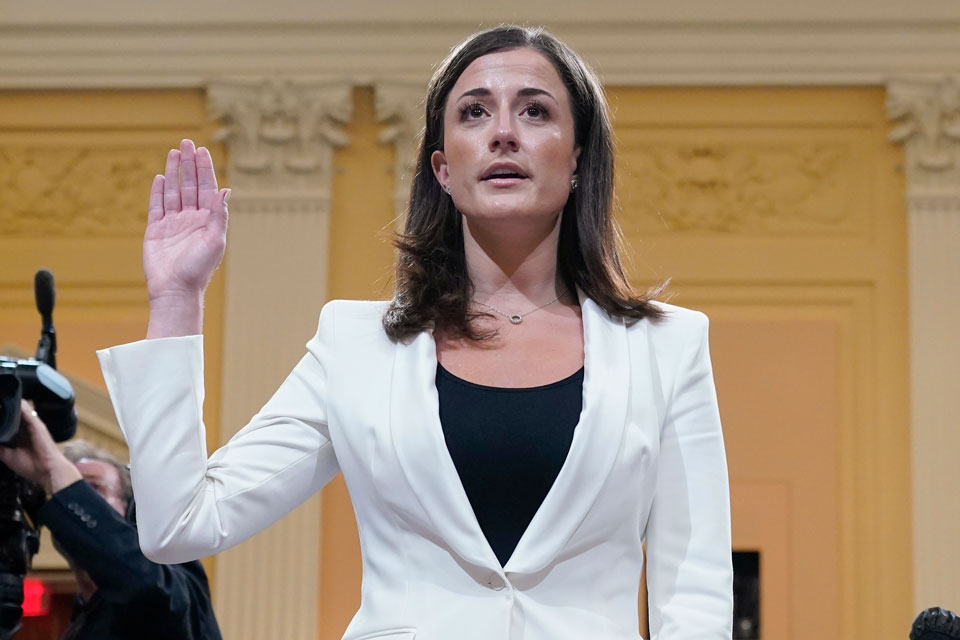 Cassidy Hutchinson, former aide to Trump White House chief of staff Mark Meadows, is sworn in to testify before the House select committee investigating the Jan. 6 attack, on Capitol Hill in Washington, June 28, 2022. Hutchinson has told the House Jan. 6 committee that her first lawyer advised her against being fully forthcoming with the panel, telling her, “the less you remember, the better.” That's according to a transcript of one of her interviews released Thursday. (AP Photo/Jacquelyn Martin, File)“We all look like domestic terrorists now,” longtime aide Hope Hicks texted Julie Radford, who served as Ivanka Trump’s chief of staff, in the aftermath.

The report says “virtually everyone on the White House staff" interviewed by the committee condemned Trump's 2:24 p.m. tweet — just as the rioters were first breaking into the Capitol — that Vice President Mike Pence “didn't have the courage to do what should have been done to protect our Country and our Constitution.”

“Attacking the VP? Wtf is wrong with him," Hicks texted another colleague that evening.

The investigation's release is a final act for House Democrats who are ceding power to Republicans in less than two weeks, and have spent much of their four years in power investigating Trump. Democrats impeached Trump twice, the second time a week after the insurrection. He was acquitted by the Senate both times. Other Democratic-led probes investigated his finances, his businesses, his foreign ties and his family.

On Monday, the panel officially passed their investigation to the Justice Department, recommending the department investigate the former president on four crimes, including aiding an insurrection. While the criminal referrals have no legal standing, they are a final statement from the committee after its extensive, year-and-a-half-long probe.

The committee has also begun to release hundreds of transcripts of its interviews. On Thursday, the panel released transcripts of two closed-door interviews with former White House aide Cassidy Hutchinson, who testified in person at one of the televised hearings over the summer and described in vivid detail Trump’s actions and inaction inside the White House.

In the two interviews, both conducted after her June appearance at the hearing, Hutchinson described how many of Trump’s allies, including her lawyer, pressured her not to say too much in her committee interviews.