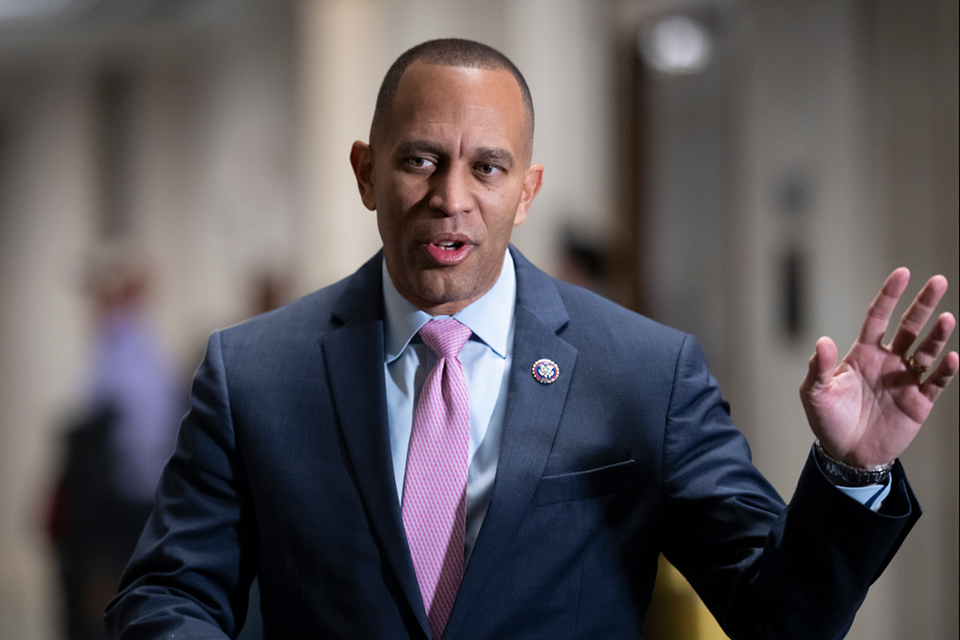 WASHINGTON (AP) — Emboldened House Democrats ushered in a new generation of leaders on Wednesday with Rep. Hakeem Jeffries elected to be the first Black American to head a major political party in Congress as long-serving Speaker Nancy Pelosi and her team step aside next year.

Showing rare party unity after their midterm election losses, the House Democrats moved seamlessly from one history-making leader to another, choosing the 52-year-old New Yorker, who has vowed to “get things done,” even after Republicans won control of the chamber. The closed-door vote was unanimous, by acclamation.

“It’s a solemn responsibility that we are all inheriting,” Jeffries told reporters on the eve of the party meeting. “And the best thing that we can do as a result of the seriousness and solemnity of the moment is lean in hard and do the best damn job that we can for the people.”

The new generation of leadership

It’s rare that a party that lost the midterm elections would so easily regroup and stands in stark contrast with the upheaval among Republicans, who are struggling to unite around GOP leader Kevin McCarthy as the new House speaker as they prepare to take control when the new Congress convenes in January.

Wednesday’s internal Democratic caucus votes of Jeffries and the other top leaders came without challengers. Cheers broke out after the elections.

The trio led by Jeffries, who will become the Democratic minority leader in the new Congress, includes 59-year-old Rep. Katherine Clark of Massachusetts as the Democratic whip and 43-year-old Rep. Pete Aguilar of California as caucus chairman. The new team of Democratic leaders is expected to slide into the slots held by Pelosi and her top lieutenants — Majority Leader Steny Hoyer of Maryland and Democratic Whip James Clyburn of South Carolina — as the 80-something leaders make way for the next generation.

But in many ways, the trio has been transitioning in plain sight, as one aide put it — Jeffries, Clark and Aguilar working with Pelosi’s nod these past several years in lower-rung leadership roles as the first woman to have the speaker’s gavel prepared to step down. Pelosi, of California, has led the House Democrats for the past 20 years, and colleagues late Tuesday granted her the honorific title of “speaker emerita.”

“It an important moment for the caucus — that there’s a new generation of leadership,” said Rep. Chris Pappas, D-N.H., ahead of voting.

Democratic Rep. Cori Bush of Missouri called the leadership election “historic” and a “time for change.”

“Congressman Hakeem Jeffries is an outstanding selection to serve as House Democratic Leader.

Congressman Jeffries is smart, thoughtful, and solutions-oriented, and will ensure that all Americans have a voice in the U.S. House.

"Black Americans account for about 20 percent of Democratic voters, and we applaud House Democrats for both recognizing the talent of Congressman Jeffries and elevating Black leadership to the top position of their caucus,” said Spencer Overton, president of the Joint Center. “Congressman Jeffries has been a longtime friend of the Joint Center. His advocacy ranges from participating in our 50th anniversary celebration to supporting the passage of the American Rescue Plan, the Infrastructure Investment and Jobs Act, and the Inflation Reduction Act, which each include recommendations from our research. We look forward to continuing to work with Congressman Jeffries as he ushers in a new generation of leadership in the House.”

While Democrats will be relegated to the House minority in the new year for the 118th Congress, they will have a certain amount of leverage because the Republican majority is expected to be so slim and McCarthy’s hold on his party fragile.

The House's two new potential leaders, Jeffries and McCarthy, are of the same generation but have almost no real relationship to speak of — in fact the Democrat is known for leveling political barbs at the Republican from afar, particularly over the GOP’s embrace of former President Donald Trump. Jeffries served as a House manager during Trump’s first impeachment.

“We’re still working through the implications of Trumpism,” Jeffries said, “and what it has meant, as a very destabilizing force for American democracy.”

Jeffries said he hopes to find “common ground when possible” with Republicans but will “oppose their extremism when we must.”

On the other side of the Capitol, Jeffries will have a partner in Senate Majority Leader Chuck Schumer as two New Yorkers are poised to helm the Democratic leadership in Congress. They live about a mile (1.6 kilometers) apart in Brooklyn.

“There are going to be a group, in my judgment, of mainstream Republicans who are not going to want to go in the MAGA direction, and Hakeem’s the ideal type guy to work with them,” Schumer said in an interview, referencing Trump's “Make America Great Again” slogan.

Jeffries has sometimes been met with skepticism from party progressives, viewed as a more centrist figure among House Democrats.

But Rep. Rashida Tlaib, D-Mich., a progressive and part of the “squad” of liberal lawmakers, said she has been heartened by the way Jeffries and his team are reaching out, even though they face no challengers.

“There’s a genuine sense that he wants to develop relationships and working partnerships with many of us,” she said.

Clark, in the No. 2 spot, is seen as a coalition builder on the leadership team, while Aguilar, as the third-ranking leader, is known as a behind-the-scenes conduit to centrists and even Republicans.

Clyburn, now the highest-ranking Black American in Congress, is seeking to become the assistant democratic leader, keeping a seat at the leadership table and helping the new generation to transition.

But Clyburn faces an unexpected challenge from Rep. David Cicilline, D-R.I., who is openly gay and argued Wednesday in a letter to colleagues that House Democrats should “fully respect the diversity of our caucus and the American people by including an LGBTQ+ member at the leadership table."

The election for the assistant leader post and several others is expected to be held Thursday.

Jeffries’ ascent comes as a milestone for Black Americans, the Capitol built with the labor of enslaved people and its dome later expanded during Abraham Lincoln’s presidency as a symbol the nation would stand during the Civil War.

His Brooklyn-area district was once represented by Shirley Chisholm, the first Black woman elected to Congress, who was born on the same day as his election, Nov. 30, in 1924.

“The thing about Pete, Katherine and myself is that we embrace what the House represents," Jeffries said, calling it “the institution closest to the people.”

While the House Democrats are often a big, diverse, “noisy family,” he said, “it’s a good thing." He said, "At the end of the day, we’re always committed to finding the highest common denominator in order to get big things done for everyday Americans.”