AP-NORC Poll: Many in US Doubt Their Impact on Climate 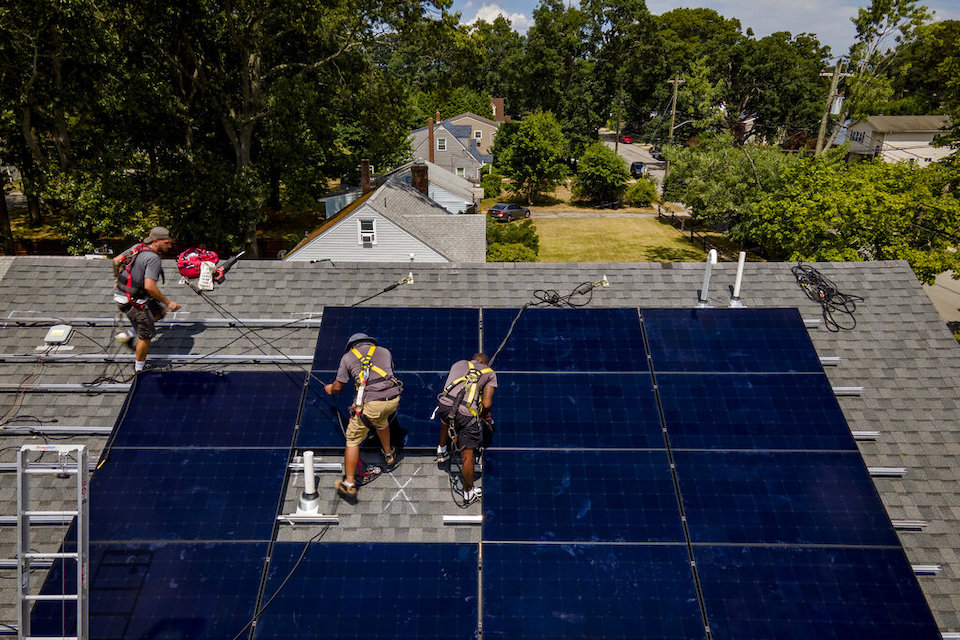 WASHINGTON (AP) — Americans are less concerned now about how climate change might impact them personally — and about how their personal choices affect the climate — than they were three years ago, a new poll shows, even as a wide majority still believe climate change is happening.

The June Associated Press-NORC Center for Public Affairs Research poll, which was conducted before Congress passed the Inflation Reduction Act on Friday, shows majorities of U.S. adults think the government and corporations have a significant responsibility to address climate change. The new law will invest nearly $375 billion in climate strategies over the next decade.

Overall, 35% of U.S. adults say they are “extremely” or “very” concerned about the impact of climate change on them personally, down from 44% in August 2019. Another third say they are somewhat concerned. Only about half say their actions have an effect on climate change, compared with two-thirds in 2019.

Black and Hispanic Americans, women and Democrats are especially likely to be strongly concerned about the impact of climate change on them personally and about how their personal choices affect the climate.

Many climate scientists told The Associated Press that the shifts are concerning but not surprising given that individuals are feeling overwhelmed by a range of issues, now including an economy plagued by inflation after more than two years of a pandemic. In addition to being outpaced by other issues, climate change or the environment are mentioned as priorities by fewer Americans now than just a few years ago, according to the poll.

Diane Panicucci in West Warwick, Rhode Island, believes climate change is happening and that it needs to be addressed. But for her, it’s a lower priority compared with other issues, including inflation and food and drug costs.

“There’s so much unrest in this country right now,” the 62-year-old said. “People are suffering.”

Panicucci added solar panels to her house, and she’s cut back on driving. She thinks individuals should do what they’re told will help, but “it doesn’t start with little ol’ me. It has to be larger scale,” she said.

While the climate crisis will require an “all of the above approach,” it’s “reasonable” that individuals don’t feel they have the bandwidth to tackle climate action “on top of everything else,” said Kim Cobb, director of the Institute at Brown University for Environment and Society.

Roughly two-thirds of Americans say the U.S. federal government, developed countries abroad and corporations and industries have a large responsibility to address climate change. Fewer — 45% — say that of individual people.

Jack Hermanson, a 23-year-old software engineer, feels strongly that corporations are the “major culprits” of emissions and that the government is complicit in that behavior.

“I don’t know if that makes sense to say that individuals should have to work and fix the climate,” the Denver resident said. “I would say my individual actions hardly mean anything at all."

U.S. household greenhouse gas emissions are not as much as those from cars, trucks and other transportation, electrical power generating and industry. A 2020 University of Michigan study of 93 million U.S. homes estimates that 20% of U.S. greenhouse gas emissions comes from home energy use, with wealthier Americans’ per capita footprints about 25% higher than low-income residents.

But like many others that spoke to the AP, that difference hasn’t stopped Hermanson from trying. He’s been a vegetarian for four years, and he tries to bike or take public transportation, buy products with less packaging and recycle.

Among Americans who believe in climate change, 70% say it will be necessary for individuals to make major lifestyle changes to combat the issue. Most think individuals have at least some responsibility.

Individuals can believe they personally don’t have a direct impact while also recognizing that collective action is essential to combatting climate change, said Shahzeen Attari, who studies human behavior and climate change at Indiana University.

The poll shows about 6 in 10 Americans say they have reduced their driving, reduced their use of heat or air conditioning and bought used products instead of new ones. Nearly three-quarters are using energy efficient appliances. Among those who are taking those steps, most say the main reason is to save money, rather than to help the environment.

Fewer — roughly a quarter — say they use an electricity supplier that gets power from renewable sources, and only about 1 in 10 live in a home with solar panels or drive a hybrid or electric car.

Brad Machincia, a 38-year-old welder, said he wouldn’t switch from his gas car to an electric vehicle. While he said he grew up in a West Virginia household that used renewable energy sources, he hasn’t adopted those practices for his family in Christiansburg, Virginia. Climate change used to be a concern for him, but at this point, he feels like it's “beating a dead horse.”

“There’s nothing we can do to fix it,” he said.

Individuals should feel empowered to make climate-driven decisions that not only help reduce emissions but also improve their lives, said Jonathan Foley, executive director at climate nonprofit Project Drawdown. Foley thinks the findings show that efforts to engage Americans need to shift away from doomsday scenarios, include diverse messengers and focus on the ways climate solutions can intersect with Americans' other priorities.

Julio Carmona, a 37-year-old financial clerk, said he recently transitioned his home in Bridgeport, Connecticut, to solar energy because the switch will help reduce his carbon footprint and his expenses, even if modestly.

“I thought that it was just something smart for us to do long term,” he said. “I just kind of wanted to do my part, whether or not it’s gonna make a difference.”

The poll of 1,053 adults was conducted June 23-27 using a sample drawn from NORC’s probability-based AmeriSpeak Panel, which is designed to be representative of the U.S. population. The margin of sampling error for all respondents is plus or minus 4 percentage points.