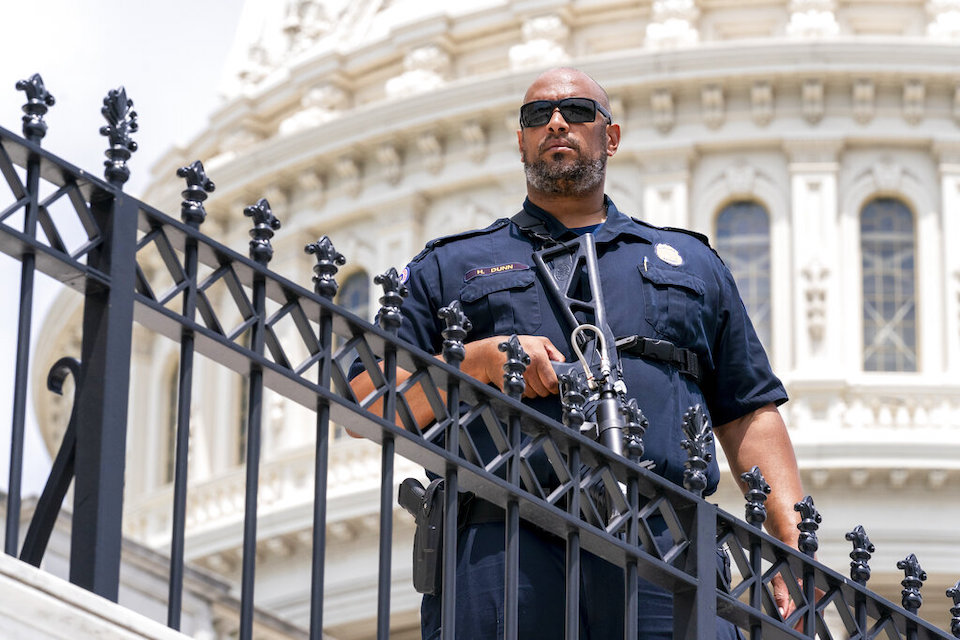 WASHINGTON (AP) — The House Jan. 6 committee launched under deep political skepticism: What more could be said about the deadly insurrection at the Capitol in 2021 that played out for all the world to see?

Quite a lot, it turns out.

The public hearings this month are showing in vivid and clear detail just how close the United States came to a constitutional crisis when President Donald Trump refused to admit his election defeat. Trump tried to use the powers of the presidency to stop Democrat Joe Biden from being certified the winner. When that didn't work, Trump summoned a mob to the Capitol.

Despite the unprecedented Capitol attack, the hearings carry echoes from U.S. history.

Like the Watergate hearings 50 years ago, the 1/6 committee has depicted a president “detached from reality,” as Trump's attorney general, Bill Barr, testified. As happened during the anti-communist McCarthy era, the testimony has provoked counter-reaction — a sense of the civic decency coming from civil servants, including many fellow Republicans, who did their jobs, despite grave personal risk, to ensure that the 2020 election was legitimate.

The “backbone of democracy,” as the committee chairman, Rep. Bennie Thompson, D-Miss., put it.

What we know so far from the Jan. 6 public hearings and what's coming next.

“OVER AND OVER AGAIN”

Almost everyone around Trump understood he was losing the Nov. 3, 2020, election.

From his campaign manager Bill Stepien, who encouraged Trump on election night to not yet claim victory, to Trump's daughter, Ivanka Trump, who testified she knew it was too early to say he had won.

But Trump nevertheless latched onto false claims of voter fraud and declared himself the winner.

“Over and over again,” the defeated president was told there was no evidence of election fraud that could have tipped the outcome to him, said Rep. Liz Cheney, R-Wyo., opening the committee's hearings.

Trump was told by his own campaign team that the numbers just weren't there for him and by Barr, who told Trump flatly that the claims being made of a fraudulent election were simply “bull—-.”

Yet one influential figure had the president's ear.

Lawyer Rudy Giuliani made his way to see Trump at the White House election night party and encouraged him to declare victory. Witnesses testified that Giuliani was inebriated and they tried to keep him away — all claims Giuliani has since said are untrue. 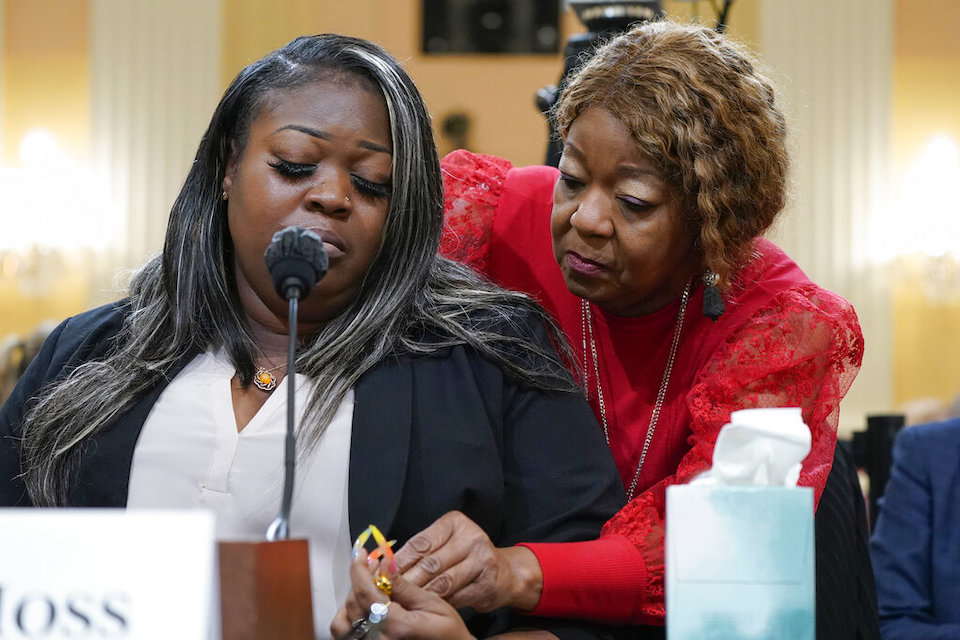 Wandrea "Shaye" Moss, a former Georgia election worker, is comforted by her mother, Ruby Freeman, right, as the House select committee investigating the Jan. 6 attack on the U.S. Capitol continues to reveal its findings of a year-long investigation, at the Capitol in Washington, Tuesday, June 21, 2022. The mother and daughter who were election workers in Georgia brought the sense of danger into stark relief. They testified they feared even to say their names in public after Trump wrongly accused them of voter fraud. (AP Photo/Jacquelyn Martin)

Trump began a relentless campaign, in public and private,to try to stop Biden's victory, according to the committee's investigation.

Trump leaned on officials from the highest levels of government to find more votes or reject those electors already affirmed. He filed dozens of legal challenges in closely contested states, hoping to flip his defeat to victory.

When one judge after another, many of whom Trump had appointed, rejected or declined to take up the lawsuits, Trump used the power of his presidency to pressure officials to act.

Arizona's Republican House speaker testified about a call from Trump in which the president made an unprecedented proposal to reject the slate of electors for Biden, who had won the state.

Trump's own Department of Justice was hounded by a president calling at all hours during the Christmas holiday season for investigations into his far-flung theories of fraud, former officials testified.

“What I’m just asking you to do is to say it was corrupt and leave the rest to me and the Republican Congressmen,” Trump said, the No. 2 Justice Department official at the time, Richard Donoghue, testified.

Said Thompson: “He wanted the Justice Department to help legitimize his lies.”

With the country enduring years of political divisions, the hearings are laying out another view — of the stewards of democracy who kept the election and its aftermath secure, despite great risk.

The witnesses, mostly Republicans, are providing gripping testimony of their work.

Raffensperger did not produce the 11,780 votes in Georgia Trump demanded.

Barr resigned rather than stick around for Trump's ideas. The rest of the Justice Department leadership ranks threatened to leave if Trump followed through on his plan to elevate a department official, Jeffrey Clark, to acting attorney general and instruct the states to block the electors.

A mother-daughter pair of election workers delivered tearful testimony of the violent harassment and death threats they faced after Trump and Giuliani falsely smeared them as having committed voter fraud.

"Nowhere I feel safe," said Ruby Freeman, a temporary election worker. "Do you know how it feels to have the president of the United States target you?”

Thompson called them the “unsung heroes” who did their jobs in the face of great.

Trump's desperate actions in the run-up to the Jan. 6 siege at the Capitol are unprecedented in scope, but carry echoes of earlier eras.

The defeated Trump tried to muscle his Department of Justice for political ends, much the way President Richard Nixon fired his top ranks in the “Saturday Night Massacre”before his resignation.

At the same time, Trump's false claims of voter fraud have provoked a counter-response from the ranks of the civil servants pushing back against what is seen as executive overreach.

“I said, ‘Look, you’re asking me to do something that is counter to my oath,’” Bowers testified.

Cheney has been compared to Margaret Chase Smith, the Republican senator from Maine who stood up on the chamber floor a half-century ago to warn her party off the political excesses of the McCarthy hearings.

Far from fully defeated, Trump has been reconsidering another White House run,

Trump has decried the Jan. 6 hearings as a “witch hunt” and has complained about House GOP leader Kevin McCarthy's “bad decision” to withdraw most Republicans from the committee, leaving the former president without a fulsome defense.

The committee cannot bring charges against Trump, but the Justice Department is closely watching the proceedings. Federal authorities this week searched Clark’s home and seized records from key Republicans in at least four states linked to Trump’s efforts to overturn the 2020 election.

The committee will resume its work after lawmakers return from a Fourth of July recess.

When the suits and pressure campaigns failed, Trump summoned supporters to Washington on Jan. 6, when Congress was set to meet in a joint session to tally the Electoral College vote.

The committee has already shown how Vice President Mike Pence, who had been presiding over that session, was forced to flee to safety as the mob shouting “Hang Mike Pence” descended on the Capitol. Rioters came within 40 feet of where Pence was being sequestered.

Extremist groups, including the Oath Keepers and Proud Boys, are facing rare sedition charges for their roles in the Capitol siege.

The committee is expected to wrap its work this summer and present a report of its findings in fall.