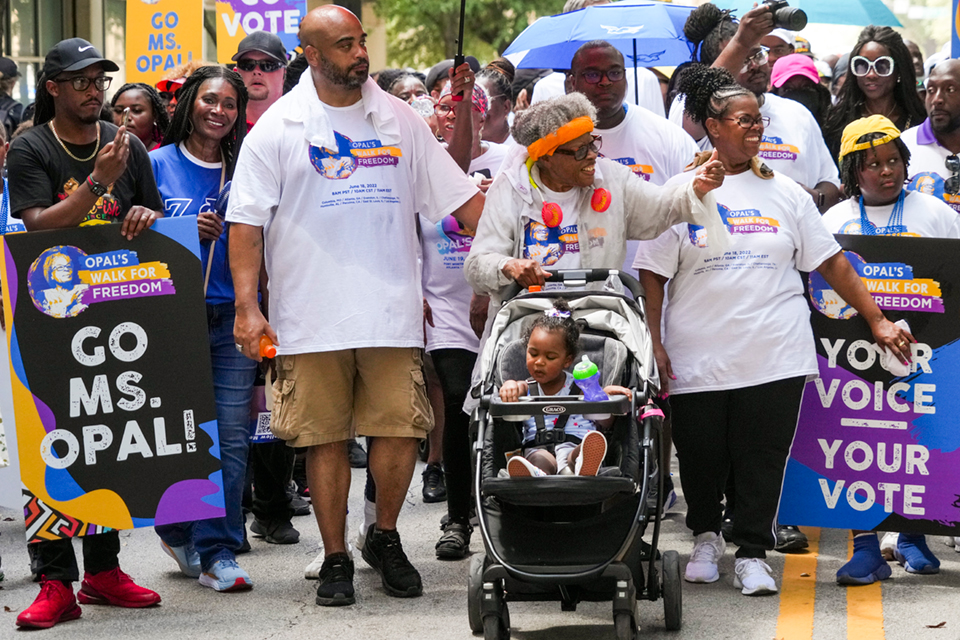 DALLAS (AP) — After Opal Lee led hundreds in a walk through her Texas hometown to celebrate Juneteenth this weekend, the 95-year-old Black woman who helped successfully push for the holiday to get national recognition said it's important that people learn the history behind it.

“We need to know so people can heal from it and never let it happen again,” said Lee, whose 2 1/2-mile (4-kilometer) walk through Fort Worth symbolizes the 2 1/2 years it took after President Abraham Lincoln’s Emancipation Proclamation ending slavery in the Southern states for the enslaved people in Texas to be freed.

A year after President Joe Biden signed legislation making June 19 the nation's 12th federal holiday, people across the U.S. gathered at events filled with music, food and fireworks. Celebrations also included an emphasis on learning about history and addressing racial disparities. Many Black people celebrated the day just as they did before any formal recognition.

Juneteenth, also known as Freedom Day, commemorates the day in 1865 when Union soldiers arrived in Galveston, Texas, to order freedom for the enslaved people of the state — two months after the Confederacy had surrendered in the Civil War.

“Great nations don’t ignore their most painful moments,” Biden said in a statement Sunday. “They confront them to grow stronger. And that is what this great nation must continue to do.”

A Gallup Poll found that Americans are more familiar with Juneteenth than they were last year, with 59% saying they knew “a lot” or “some” about the holiday compared with 37% a year ago in May. The poll also found that support for making Juneteenth part of school history lessons increased from 49% to 63%.

Yet many states have been slow to designate it as an official holiday. Lawmakers in Mississippi, South Carolina, Tennessee and elsewhere failed to advance proposals this year that would have closed state offices and given most of their public employees paid time off.

Celebrations in Texas included one at a Houston park created 150 years ago by a group of formerly enslaved men who bought the land. At times, it was the only public park available in the area to the Black community, according to the conservancy’s website.

“They wanted a place that they could not only have their celebration, but they could do other things during the year as a community,” said Jacqueline Bostic, vice chairwoman of the board for the Emancipation Park Conservancy and the great-granddaughter of one of the park's founders, the Rev. Jack Yates. 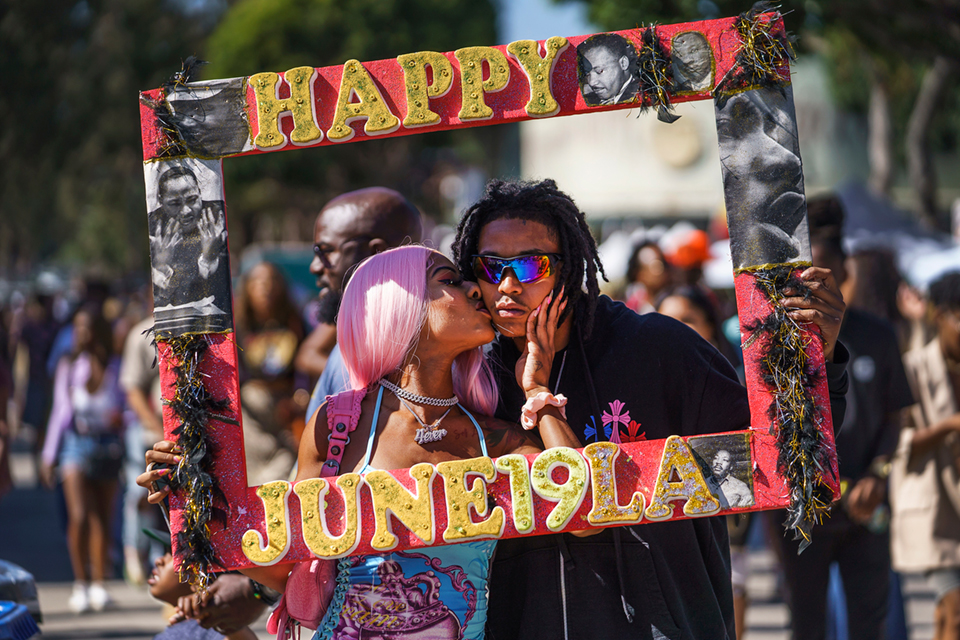 This weekend's celebration included performances from The Isley Brothers and Kool & The Gang. In the weeks leading up to Juneteenth, the park hosted discussions on topics ranging from health care to policing to the role of green spaces.

Participants included Robert Stanton, the first African American to serve as director of the National Park Service, and Philonise Floyd, the brother of George Floyd, who grew up in the historically Black neighborhood where the park is located and whose killing by a Minneapolis police officer two years ago sparked protests worldwide.

As more people learn about Juneteenth, “we want to harness that and use this moment as a tool to educate people about history and not just African American history but American history,” said Ramon Manning, chairman of the board for the Emancipation Park Conservancy.

In Fort Worth, celebrations included the Bill Pickett Invitational Rodeo, named for the Black cowboy who is credited with introducing bulldogging, or steer wrestling. The rodeo’s president and CEO, Valeria Howard Cunningham, said children often express surprise that there are real Black cowboys and cowgirls. 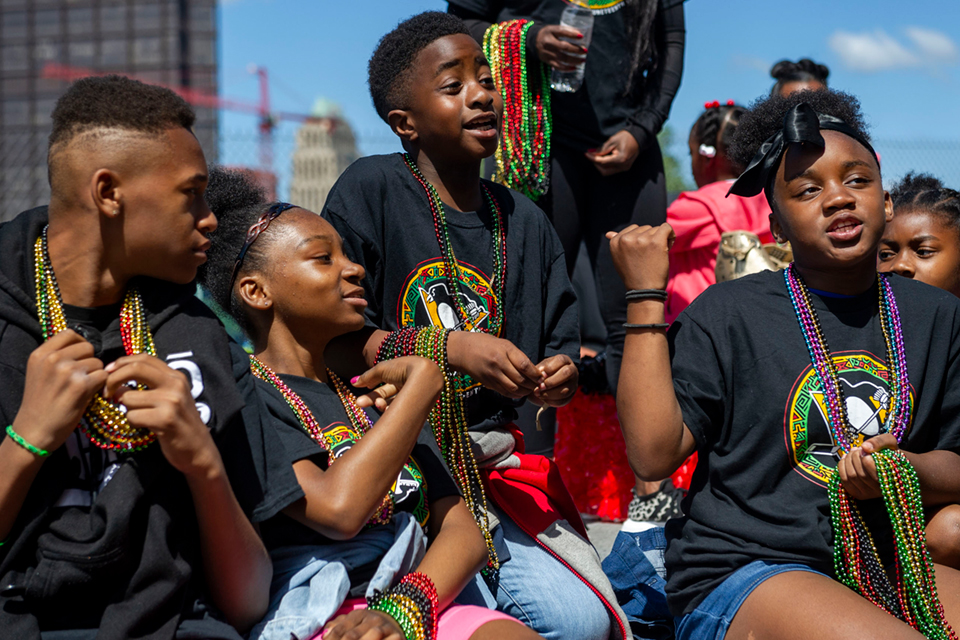 Members of Willie O'Ree Academy and Pittsburgh I.C.E. sit on the Penguin's float during the Juneteenth Voting Rights Parade lineup on Saturday, June 18, 2022, in Pittsburgh. Willie O'Ree Academy, an ice hockey training program for young Black players, and Pittsburgh I.C.E., Inclusion Creates Equality, were invited to ride on the Penguin's float in the parade from Freedom Corner to Point State Park. (Ariana Shchuka/Pittsburgh Post-Gazette via AP)

Juneteenth provides an opportunity to reflect on “the different practices or norms that are contradicting the values of freedom” and consider how to challenge those things, Harris said.

Some of the largest city celebrations from Los Angeles to Chicago to Miami not only touched on the history of slavery in America, but also celebrated Black culture, business and food.

In Phoenix, hundreds of people gathered for an annual event at Eastlake Park, which has been a focal point for civil rights in Arizona. The recently crowned Miss Juneteenth Arizona used her platform to speak about how she felt empowered during the state pageant, which is part of a nationwide competition that showcases and celebrates the academic and artistic achievements of Black women.

It's a “moment to build up sisterhood, it's not about competing against each other for a crown, it's about celebrating Black women's intelligence and staying true to ourselves,” said Shaundrea Norman, 17, whose family is from Texas and grew up knowing about Juneteenth. 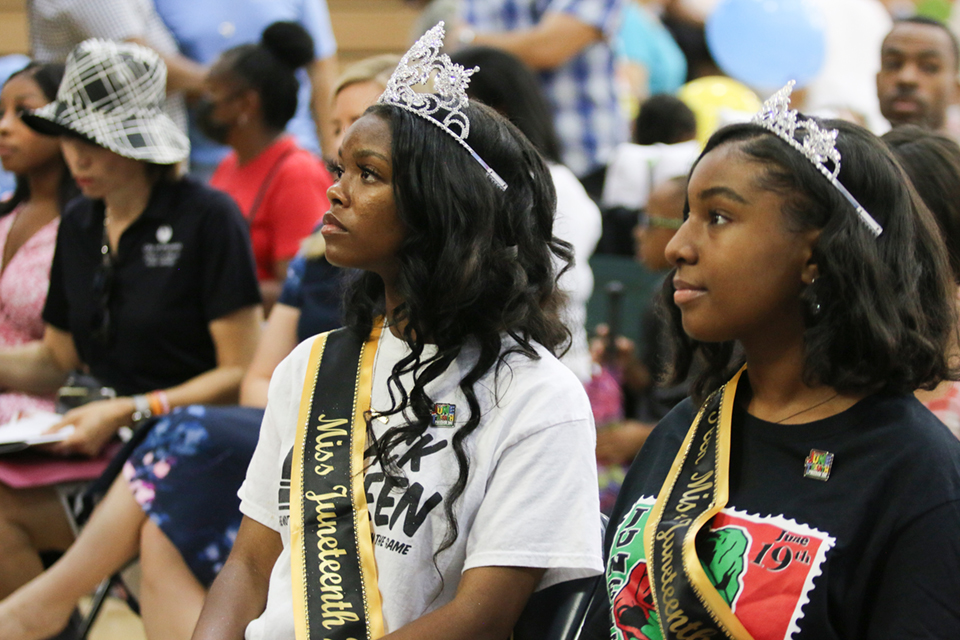 “We have to fight twice as hard to have the same freedoms that our ancestors fought for hundreds of years ago,” she said.

“It's important we continue to fight for my generation, and this day is important to celebrate how far we've come."

The event featured performances by Kawambe-Omowale African Drum & Dance and speeches from politicians about ways residents could get involved in local politics as children received balloon animals and ran through Eastlake Park's playground.

In New York City, Juneteenth was celebrated across its five boroughs, with events drawing crowds that exceeded organizers’ expectations. In central Brooklyn, well over 7,000 people attended a food festival organized Saturday and Sunday by Black-Owned Brooklyn, a digital publication and directory of local Black businesses.

Although Juneteenth is a Black American holiday, organizers of the festival said they were intentional about including cuisines and flavors from Caribbean and West African countries. On Sunday, long lines formed from nearly every food stall, while a DJ played soulful house music for festively dressed attendees.

“The idea to celebrate Juneteenth around our food culture is particularly meaningful here in Brooklyn, where we have so many Black folks who live here from across the world,” said Tayo Giwa, co-creator of Black-Owned Brooklyn.

“Paying tribute to it through our shared connection in the (African) diaspora, it’s really powerful,” he said. 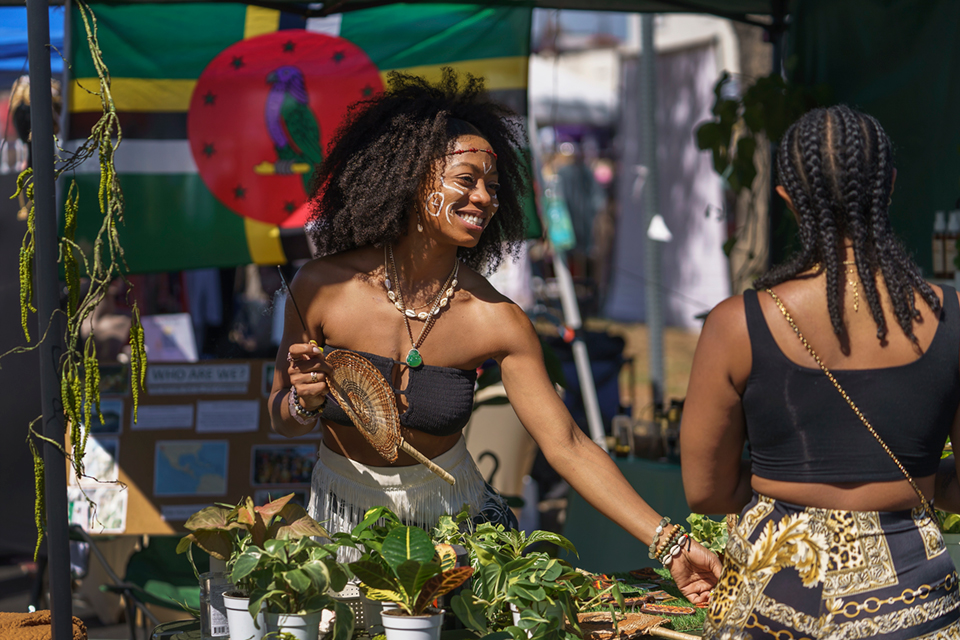 Reanna Barry, left, from Dominica, the island country in the Caribbean, sells natural products and plants during a Juneteenth commemoration at Leimert Park in Los Angeles on Saturday, June 18, 2022. (AP Photo/Damian Dovarganes)

The event was held at the Weeksville Heritage Center, which was one of the largest Black communities for freedmen before the Civil War. Attendees were given guided tours of the grounds, which includes historic homes and other structures that were once inhabited by the community’s founders.

“For a day that’s about emancipation, it only makes sense to have people gather on this land and feed each other not just with food but also spirit and soul, emotion and love,” said Isa Saldaña, programs and partnerships manager for the Weeksville Heritage Center.

“A big part of (Juneteenth) is about learning to be free and feeling okay doing that,” she said.

Jeffrey Whaley Sr. attended the festival with his three children on Sunday, which was also Father’s Day. The Staten Island, New York, native said he was hopeful that federal observances of Juneteenth would increase awareness of the Black American story in the U.S.

“As each of us grows, we have to grow in the consciousness that we suffered a lot longer than they’re telling us we did,”

Whaley said. “It’s our duty to our ancestors to make sure we educate ourselves and better ourselves within this country, because this country owes us a whole lot.”