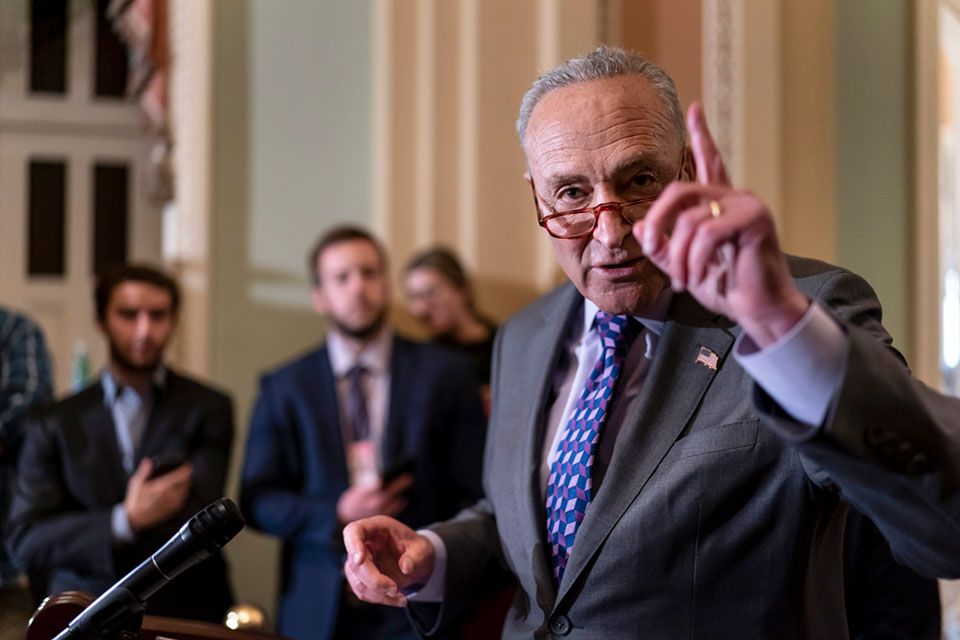 WASHINGTON (AP) — After fighting for decades over abortion policy, Congress is about to run into the stark political limits of its ability to save — or end — the Roe v. Wade protections.

President Joe Biden has called on Democrats to enshrine the nearly 50-year-old Supreme Court ruling into law after the disclosure of a draft opinion that would overturn the landmark decision that declared a constitutional right to abortion services.

But passing bills is easier said than done in the narrowly split Congress — reflective of a deeply divided nation.

A test vote Wednesday in the Senate on a Democratic bill to protect access to abortions is expected to fail, blocked by a Republican-led filibuster.

At the same time, Republicans led by Sen. Mitch McConnell face similar political problems trying to ban abortions nationwide, even if they wrest control of the chamber in next fall's midterm elections.

Instead, whatever the Supreme Court decides on Roe v. Wade in its final opinion this summer almost guarantees a new era of political fighting in Congress over abortion policy, filibuster rules and the most basic rights to health care, privacy and protecting the unborn.

“All of us will have to answer for this vote for the rest of our time in public office,”

In recent years, abortion access debates in many ways have come to a standstill in Congress, a political draw, as lawmakers faced the limits of trying to move public policy beyond the historic Roe v. Wade court decision. Bills would routinely come up for votes — to expand or limit abortion services — only to fall along typically party line votes or be stripped out of broader legislative packages.

But the Supreme Court's conservative 6-3 majority, solidified during the Trump era, has ignited an urgent shift to the forefront in Congress.

McConnell stunned Washington when he said “it's possible” to see a national abortion ban.

The Republican leader has been a key architect of the Supreme Court's solid conservative majority, engineering rapid-fire confirmation of three of Donald Trump's nominees in just four years and changing Senate filibuster rules to push past Democratic objections.

In an interview with USA Today, McConnell recently said, “If the leaked opinion became the final opinion, legislative bodies — not only at the state level but at the federal level — certainly could legislate in that area."

But on Tuesday McConnell acknowledged that if Republicans become the majority in the Senate they still are unlikely to have enough votes to ban abortion outright.

“The widespread sentiment in my conference is this issue will be dealt with at the state level,” McConnell said. He said Republicans won't have the 60 votes needed to overcome a filibuster.

Likewise, Democrat Brian Schatz of Hawaii said for the other side, “I think we have to be explicit and tell the truth, which is, we don’t currently have the votes.” Still, he said hopefully that if voters elect more senators who favor abortion rights, "we will put this into federal law.”

Both parties face enormous pressure to convince voters they are doing all they can — the Democrats working to preserve abortion access and the Republicans to end it — as they race toward fall when control of Congress is at stake in the elections.

The congressional campaign committees are fundraising off the abortion issue, and working furiously to energize voters who are already primed to engage when such a long-running and important issue for millions of Americans is at stake.

The two Republican senators who support abortion access — Lisa Murkowski of Alaska, who faces her own reelection in November, and Susan Collins of Maine — have proposed a separate bill that would counter the Supreme Court's action.

But both senators, who voted to confirm most of Trump's justices, are expected to stick with the Republican Party this week and block the Democratic bill as too broad.

At the same time, Democrats have largely panned the Collins-Murkowski effort as insufficient, leaving no hopes, for now, of any compromise.

And rank-and-file Republicans distanced themselves from McConnell's initial remarks, saying an all-out national ban on abortions is not something they can deliver.

"The reality is is that you would never get that done here," said Sen. Mike Rounds, R-S.D.

Democrats are unconvinced that Republicans, who have fought for years to deny abortion services, would give that fight up now and let the states decide.

Democrats believe Republicans are “running scared,” Schumer said, afraid of what they have unleashed, with polls showing most Americans want to preserve some access to abortion.

It was McConnell who blocked Barack Obama's choice of Merrick Garland to fill a Supreme Court vacancy at the start of the 2016 presidential campaign, leaving the seat open for Trump to fill after he won the White House.

And even though McConnell insisted Tuesday there is “zero” interest among Republicans to change Senate filibuster rules to make it easier to pass an abortion ban, it was the GOP leader who orchestrated the Senate rules change to allow 51-vote threshold to confirm Supreme Court nominees.

“Republicans have worked day in and day out for decades on end to overturn Roe v. Wade,” said Sen. Patty Murray, D-Wash.

More likely is that both parties will try to chip away at the issue — Republicans tightening access to abortion at the national level, while Democrats work to shore up the availability of medicinal abortions and other related services.

“There are multiple fronts we can move on,” said Sen. Elizabeth Warren, D-Mass.

In the House, where Democrats have the majority, lawmakers approved the Women's Health Protection Act last year on a largely party-line vote once the Supreme Court first signaled it was considering the issue by allowing a Texas law's ban on abortions to take effect.

But the bill has languished in the Senate, evenly split 50-50 with Democratic control because of Vice President Kamala Harris' ability to cast a tie-braking vote. Unable to mount the 60 votes needed to overcome a filibuster, a test vote failed in February, with one Democrat, Sen. Joe Manchin of West Virginia, joining Republicans to block the bill's consideration.

A similar outcome is expected Wednesday when the Senate tries again to pass the legislation, which would put the guaranteed right to abortion into law.

It's the first of what Schumer promises will be repeated efforts to show voters where the parties stand.

“This is no longer just a abstract exercise: Now we know women’s rights are at stake,”

Schumer said. "So this vote is the first step. We are going to keep fighting."