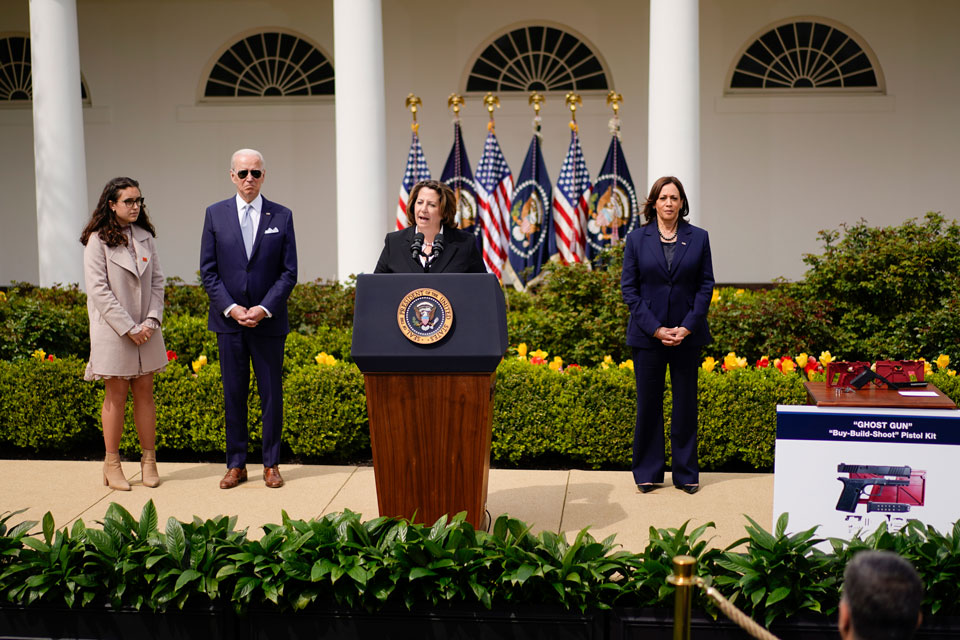 WASHINGTON (AP) — President Joe Biden on Monday took fresh aim at ghost guns, the privately made firearms without serial numbers that are increasingly cropping up in violent crimes, as he struggles to break through gridlock in Washington to address gun deaths and mass shootings.

Speaking at the White House, Biden highlighted the Justice Department's work to finalize new regulations to crack down on ghost guns, and announced the nomination of Steve Dettlebach, who served as a U.S. attorney in Ohio from 2009 to 2016, to run the Bureau of Alcohol, Tobacco, Firearms and Explosives. 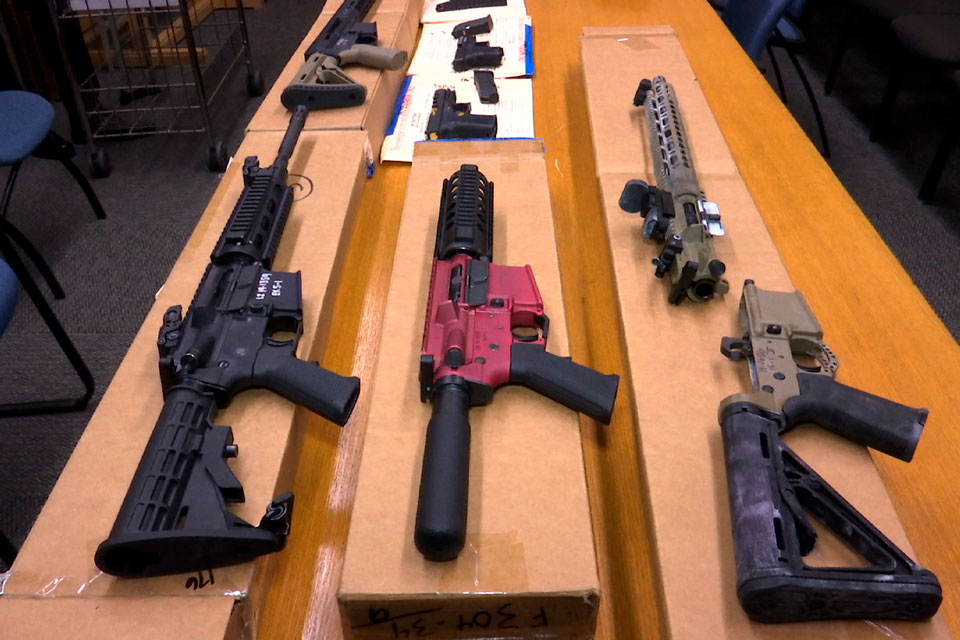 This Nov. 27, 2019, file photo shows "ghost guns" on display at the headquarters of the San Francisco Police Department in San Francisco. The Biden administration is expected to come out within days with its long-awaited ghost gun rule. The aim is to rein in privately made firearms without serial numbers. They're increasingly cropping up at crime scenes across the U.S. Three people familiar with the matter tell The Associated Press the rule could be released as soon as Monday, April 11,2022. They could not discuss the matter publicly and spoke to AP on condition of anonymity. (AP Photo/Haven Daley, File)“Law enforcement is sounding the alarm," Biden said of ghost guns, briefly holding one up for cameras to see in the Rose Garden. “Our communities are paying the price.”

He promised the new regulations would save lives.

Still, the announcement on guns highlights the limits of Biden’s influence to push a sweeping congressional overhaul of the nation’s firearm laws in response to both a recent surge in violent crime and continued mass shootings. Congress has deadlocked on legislative proposals to reform gun laws for a decade, and executive actions have faced stiff headwinds in federal courts — even as the Democratic base has grown more vocal in calling on Biden to take more consequential action.

Dettlebach’s confirmation, too, is likely to be an uphill battle. Biden had to withdraw the nomination of his first ATF nominee, gun-control advocate David Chipman, after it stalled for months because of opposition from Republicans and some Democrats in the Senate.

Both Republican and Democratic administrations have failed to get nominees for the ATF position through the politically fraught process since the director’s position was made confirmable in 2006. Since then, only one nominee, former U.S. Attorney B. Todd Jones, has been confirmed. Jones made it through the Senate in 2013 but only after a six-month struggle. Jones was acting director when President Barack Obama nominated him in January 2013. 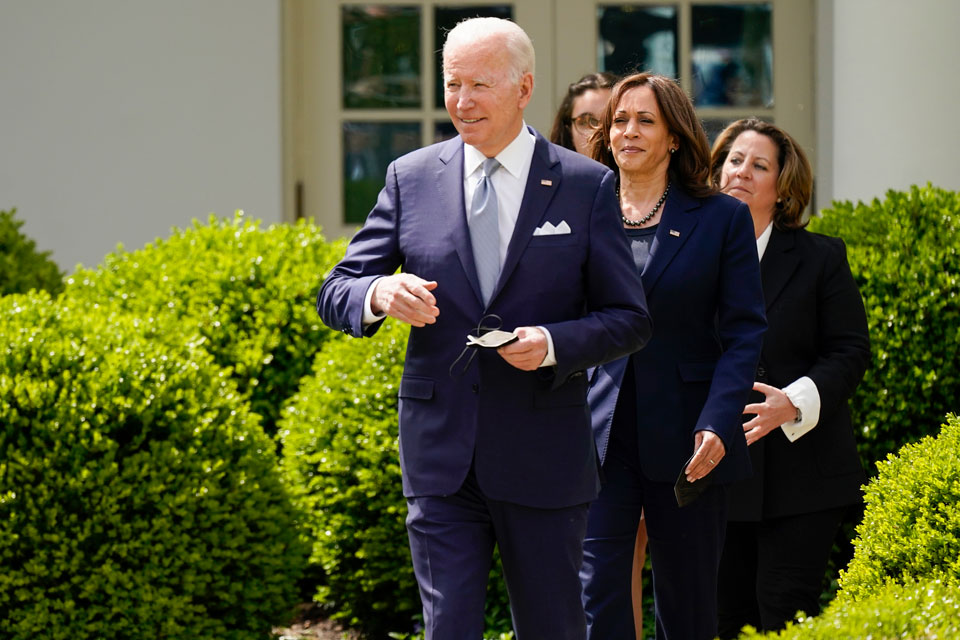 President Joe Biden, Vice President Kamala Harris, Deputy Attorney General Lisa Monaco and Mia Tretta arrive to speak in the Rose Garden of the White House in Washington, Monday, April 11, 2022, to announce a final version of the administration's ghost gun rule, which comes with the White House and the Justice Department under growing pressure to crack down on gun deaths. (AP Photo/Carolyn Kaster)The Biden administration’s plan on guns was first reported by Politico.

For nearly a year, the ghost gun rule has been making its way through the federal regulation process. Gun safety groups and Democrats in Congress have been pushing for the Justice Department to finish the rule for months. It will probably be met with heavy resistance from gun groups and draw litigation in the coming weeks.

Gun Owners of America vowed that it would immediately fight the rule.

“Just as we opposed the Trump Administration’s arbitrary ban on bump stocks, GOA will also sue Biden’s ATF to halt the implementation of this rule," Aidan Johnston, the group’s director of federal affairs said in a statement. The group believes the rule violates the U.S. Constitution and several federal laws.

But gun safety advocacy groups, like Everytown for Gun Safety, which pushed the federal government for years to take action on ghost guns, applauded Biden's moves and insisted that both Dettlebach's appointment and the finalized rule will help combat gun violence.

Christian Heyne, the vice president of policy at Brady, another gun control group, said Dettlebach was “an unimpeachable public servant who has spent a career using the levers of government to hold negligent or nefarious actors accountable.” 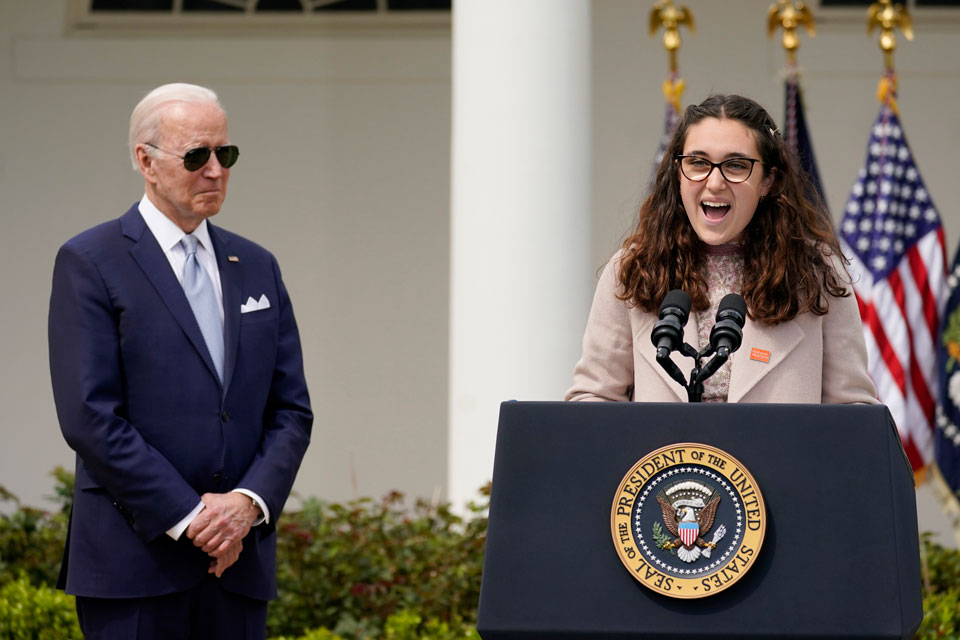 President Joe Biden listens as Mia Tretta, a survivor of the Saugus High School shooting in Santa Clarita, Calif., speaks in the Rose Garden of the White House in Washington, Monday, April 11, 2022. Biden announced a final version of the administration's ghost gun rule, which comes with the White House and the Justice Department under growing pressure to crack down on gun deaths. (AP Photo/Carolyn Kaster)Justice Department statistics show that nearly 24,000 ghost guns were recovered by law enforcement at crime scenes and reported to the government from 2016 to 2020. It is hard to say how many are circulating on the streets, in part because in many cases police departments don’t contact the government about the guns because they can’t be traced.

The new rule changes the current definition of a firearm under federal law to include unfinished parts, like the frame of a handgun or the receiver of a long gun. It says those parts must be licensed and include serial numbers. Manufacturers must also run background checks before a sale — as they do with other commercially made firearms. The requirement applies regardless of how the firearm was made, meaning it includes ghost guns made from individual parts, kits, or by 3D-printers.

Federally licensed firearms dealers must retain key records until they shut down their business or licensed activity and then transfer the records to ATF as they are currently required to do at the end of licensed activity. Previously, these dealers were permitted to destroy most records after 20 years, making it harder for law enforcement to trace firearms found at crime scenes.

“A year ago this week standing here with many of you, I instructed the attorney general to write a regulation that would rein in the proliferation of ghost guns because I was having trouble getting anything passed in the Congress,” Biden said.

The rule goes into effect 120 days from the date of publication in the Federal Register.

For years, federal officials have been sounding the alarm about an increasing black market for homemade, military-style semi-automatic rifles and handguns. As well as turning up more frequently at crime scenes, ghost guns have been increasingly encountered when federal agents buy guns in undercover operations from gang members and other criminals.

Some states, like California, have enacted laws in recent years to require serial numbers to be stamped on ghost guns.

Pennsylvania Attorney General Josh Shapiro, who was attending Monday’s event at the White House, applauded the move and pointed to a serious uptick in ghost guns being found by police. Police in Philadelphia have seen nearly a 500% increase in the number of ghost guns recovered in the past two years, Shapiro said. And just last week, a police officer there was shot by a ghost gun-wielding 18-year-old, who police said had also shot three others.

“This loophole has caused our nation countless lives,” Shapiro said in an interview.

“Today is a critically important step to close that loophole.”

He said the move is likely to help drive down violence and aid both police and prosecutors in bringing their cases. The rule is also likely to help bring down the number of people who shouldn’t be purchasing firearms before a gun lands in their hand, he said.

“There are two challenges: One, criminals can easily buy them without going through a background check. And two, they are unsterilized and untraceable.”

The critical component in building an untraceable gun is what is known as the lower receiver, a part typically made of metal or polymer. An unfinished receiver — sometimes referred to as an “80-percent receiver” — can be legally bought online with no serial numbers or other markings on it, no license required.

Police across the country have been reporting spikes in ghost guns being recovered by officers. The New York Police Department, for example, said officers found 131 firearms without serial numbers since January.

A gunman who killed his wife and four others in Northern California in 2017 had been prohibited from owning firearms, but he built his own to skirt the court order before his rampage. And in 2019, a teenager used a homemade handgun to fatally shoot two classmates and wound three others at a school in suburban Los Angeles.