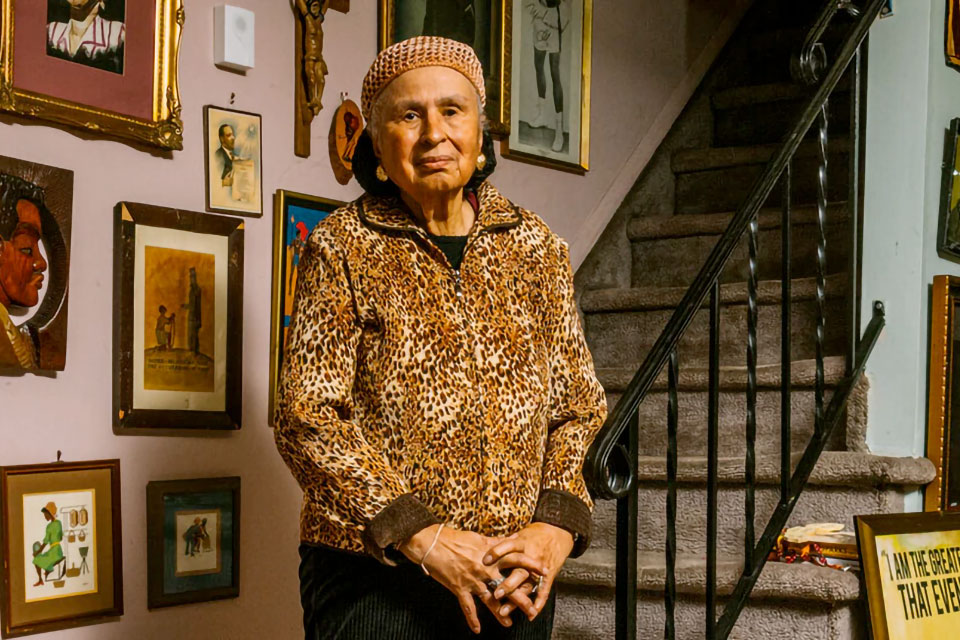 It is one of the largest collections of Black artifacts in the country.

Elizabeth Meaders is a retired New York City school teacher who first began collecting Jackie Robinson artifacts as a young girl. From there she started visiting sports memorabilia shows, buying artifacts from other Black athletes like boxer Joe Louis. One day, she acquired an image of Crispus Attucks, the first American killed in the American Revolution, sparking her love for Black military items. One day she looked up and she just never stopped.

“Little by little I just expanded, and it became a labor of love,” explained Meaders.

Now 90-years-old, Meaders' entire house in Staten Island has turned into a living museum of sorts, complete with nearly 20,000 items that she’s collected over the course of six decades, one of the largest collections of Black historical artifacts in the nation. She has now decided to finally sell her collection at Guernsey’s auction house in Manhattan, The Elizabeth Meaders Collection going on sale this past March 15.

“I can’t go any further - the collection is outgrowing the house and pushing me out.

"I’m used up and the space is used up, so it has to be transferred into competent hands that can take it to the next level…I hope the sale will give it a better life because it doesn’t belong in anybody’s house any longer - each piece needs a chance to sing its own song,” said Meaders.

Her hope is that a philanthropist will donate the collection to the public via a museum or university, or the pieces will become the basis of an African American museum in New York. The collection has been appraised twice already, once in 2009 by Randy F. Weinstein, founder of the W.E.B. Du Bois Center, who priced the collection at around $7.5 million, and again by Diane DeBlois, co-owner of aGatherin’ ephemera sellers, who appraised the collection at a $10 million value.

Photo Courtesy of DeSean McClinton-Holland/The New York TimesNot only was the entire collection acquired by a school teacher on a modest budget, Meaders is also a history buff who is the sole authority on much of the collection’s historical significance, creating long videos detailing each piece and harboring items that tell a more detailed and complete story of African American life.

“She had to go toe-to-toe with some pretty impressive collectors to outbid them. She raised money through bake sales and school raffles, all sorts of ways,” DeBlois said.

Meaders spoke about some of that funding, saying she worked several jobs often and even purchased items via installment plans and borrowed against the value of her own home.

“I’ve never been wealthy, but I refinanced my house a few times and ran up quite a bit of debt,” said Meaders. 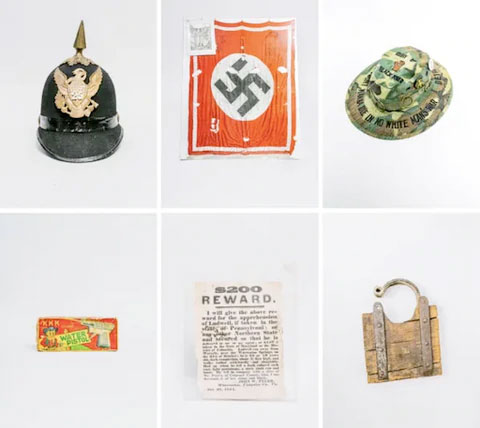 Photo Courtesy of DeSean McClinton-Holland/The New York TimesThe elder collector’s daughters have opted out of taking over the collection and Meaders hopes selling it will allow the collection to really flourish and help educate people on little known Black stories. Often the only Black woman buyer at various auctions, Meaders is now well known in the collector community, having devoted her whole life to the work. Items range in depth, from a pair of boxing shoes that belonged to Muhammad Ali to Civil War medals to a Ku Klux Klan grand dragon robe currently on display in the stairway of her basement under the exhibit “Civil Rights and Civil Wrongs.”

“No other collection of this size focusing on Black history [has ever come] up for sale at auction before. Crammed into this simple home is a collection that tells the whole saga of African American history, from the scourge of slavery to the struggle of civil rights, to Black soldiers in all of our wars from the Revolution through Vietnam,” said Arlan Ettinger, president of Guernsey’s.

Wyatt Houston Day, a historian and appraiser who has also visited Meaders’ home echoed those sentiments.

“The thing that makes her collection so unique is that she has a lot of the connective tissue that fill in the gaps in other accounts, small things you won’t find in other collections but that add the important details…People talk about African Americans in the military, but she has an actual musket that would have been carried from a Black Civil War soldier,” said Day.

Photo Courtesy of DeSean McClinton-Holland/The New York TimesSelling the collection will allow Ms. Meaders some much needed space in her home, but most importantly, she hopes to empower Black people by making it available for the world.

"The more I found, the more I wanted because the whole thing became a huge puzzle and I began obsessively trying to fill in the missing pieces…This is a motherlode of information, with so many stories that have never been told. That’s the purpose of my collection: to educate, heal, inspire and empower,” said Meaders.

The granddaughter of William A. Morris, who owned an auction house on Staten Island and founded the N.A.A.C.P. branch on the island, Meaders said her collection might be sold but that won’t stop her from acquiring things, something she thinks runs in her blood.

“I think that even when I’m in my coffin and something comes up for auction, I’ll probably toss a bid out,” joked Meaders.

To learn more about The Elizabeth Meaders Collection, click here.