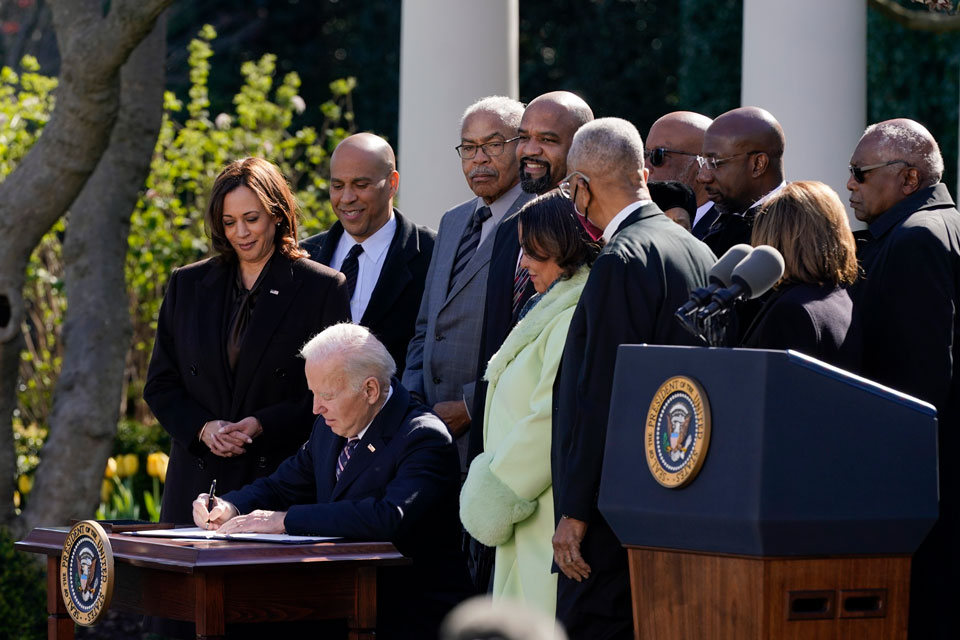 WASHINGTON (AP) — Presidents typically say a few words before they turn legislation into law. But Joe Biden flipped the script Tuesday when it came time to put his signature on the Emmett Till Anti-Lynching Act.

He signed the bill at a desk in the White House Rose Garden. Then he spoke.

“All right. It's law,” said the president, who was surrounded by Vice President Kamala Harris, members of Congress and top Justice Department officials. He was also joined by a descendant of Ida B. Wells, a Black journalist who reported on lynchings, and Rev. Wheeler Parker, a cousin of Till.

Biden said it's “a little unusual to do the bill signing, not say anything and then speak. But that's how we set it up.”

He thanked the audience of civil rights leaders, Congressional Black Caucus members and other guests who kept pushing for the law for “never giving up, never ever giving up.” 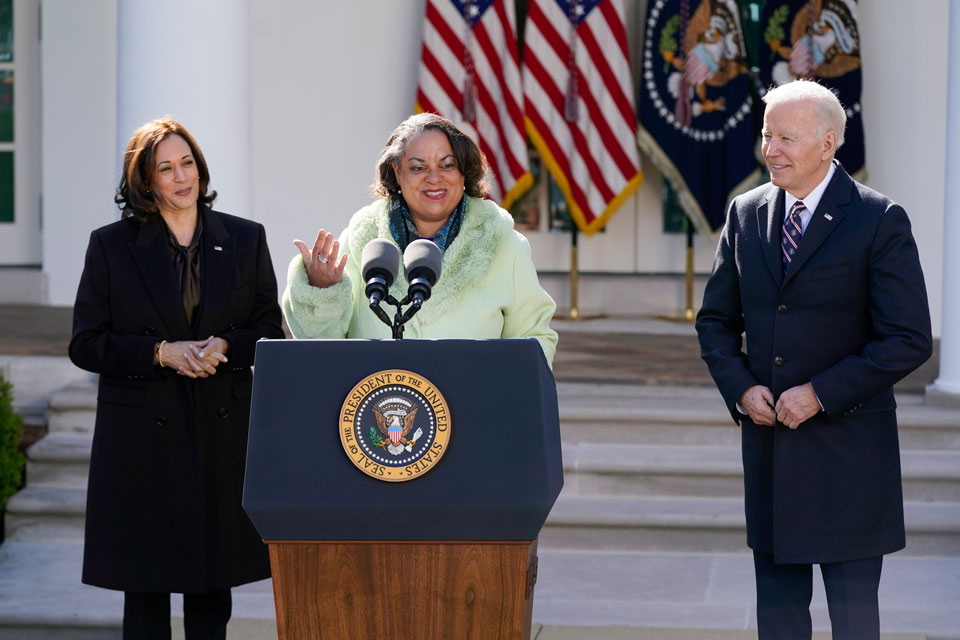 Congress first considered anti-lynching legislation more than 120 years ago. Until March of this year, it had failed to pass such legislation nearly 200 times, beginning with a bill introduced in 1900 by North Carolina Rep. George Henry White, the only Black member of Congress at the time.

Harris was a prime sponsor of the bill when she was in the Senate.

The Emmett Till Anti-Lynching Act is named for the Black teenager whose killing in Mississippi in the summer of 1955 became a galvanizing moment in the civil rights era. His grieving mother insisted on an open casket to show everyone how her son had been brutalized.

“It's a long time coming,” said Parker, who was onstage with Biden when the president signed the bill. Parker, two years older than Till, was with his cousin at their relatives' home in Mississippi and witnessed Till's kidnapping.

In his remarks, Biden acknowledged the struggle to get a law on the books, and spoke about how lynchings were used to terrorize and intimidate Blacks in the United States. More than 4,400 Blacks died by lynching between 1877 and 1950, mostly in the South, he said.

Biden, who has many Black men and women in key positions throughout his administration, stressed that forms of racial terror continue in the United States, demonstrating the need for an anti-lynching statute.

“Hate never goes away. It only hides.”

The new law makes it possible to prosecute a crime as a lynching when a conspiracy to commit a hate crime leads to death or serious bodily injury, according to the bill’s champion, Rep. Bobby Rush, D-Ill. The law lays out a maximum sentence of 30 years in prison and fines.

The House approved the bill 422-3 on March 7, with eight members not voting, after it cleared the Senate by unanimous consent. Rush had introduced a bill in January 2019 but it stalled in the Senate after the House passed by a vote of 410-4.

The NAACP began lobbying for anti-lynching legislation in the 1920s. A federal hate crime law was passed and signed into law in the 1990s, decades after the civil rights movement.

“Today we are gathered to do unfinished business,” Harris said, “to acknowledge the horror and this part of our history, to state unequivocally that lynching is and has always been a hate crime and to make clear that the federal government may now prosecute these crimes as such.”

“Lynching is not a relic of the past,” she added. “Racial acts of terror still occur in our nation, and when they do, we must all have the courage to name them and hold the perpetrators to account.”

Till, 14, had traveled from his Chicago home to visit relatives in Mississippi in 1955 when it was alleged that he whistled at a white woman. He was kidnapped, beaten and shot in the head. A large metal fan was tied to his neck with barbed wire and his body was thrown into a river. His mother, Mamie Till, insisted on an open casket at the funeral to show the brutality he had suffered.

Two white men, Roy Bryant and his half-brother J.W. Milam, were accused, but acquitted by an all-white-male jury. Bryant and Milam later told a reporter that they kidnapped and killed Till.

During a video interview after the bill signing, Parker credited current events for helping the anti-lynching bill move through Congress and to Biden’s desk. Parker specifically mentioned the police killing of George Floyd by a Minneapolis police officer in May 2020, which sparked months of protests in the United States and other countries after videotape of the officer's actions circulated.

He drew a connection between Floyd and Till, saying, “That’s what caused Rosa Parks to not give her seat up and that sparked the civil rights movement, because she thought about Emmett Till.”