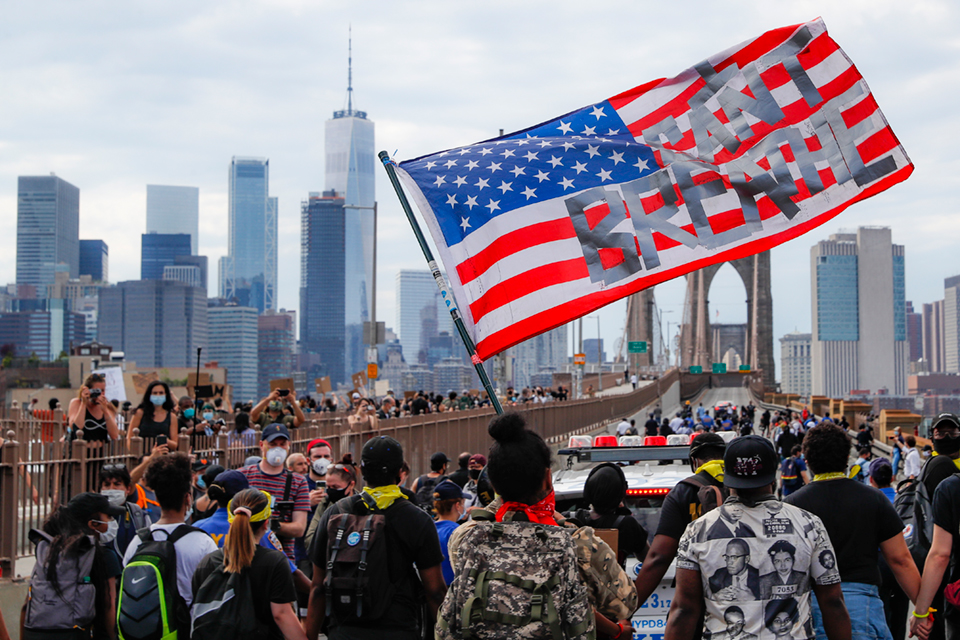 NEW YORK (AP) — Few Americans believe there has been significant progress over the last 50 years in achieving equal treatment for Black people in dealings with police and the criminal justice system.

Most Americans across racial and ethnic groups say more progress is necessary, according to a new poll by The Associated Press-NORC Center for Public Affairs Research. But Black Americans, many whom may have held hope in Democrats’ promises on racial justice initiatives in 2020, are especially pessimistic that any more progress will be made in the coming years.

Overall, only about a quarter of Americans say there has been a great deal or a lot of progress in achieving racial equality in policing and criminal justice. Roughly another third say there's been “some” progress. An overwhelming majority of adults say more progress is needed for racial equality, including about half who say “a lot” more.

“There’s more attention around certain issues and there’s a realization — more people are waking up to a lot of corruption in the system,” said Derek Sims, a 35-year-old bus driver in Austin, Texas, who is Black. He considers himself more optimistic than pessimistic that change will happen.

However, Sims said: “People don’t really want to come together and hash out ideas. There’s just too much tribalism.”

Among those who think more progress is needed on achieving fair treatment for Black Americans by police, 31% say they are optimistic about that happening in the next few years, while 38% are pessimistic. Roughly another third say they hold neither opinion.

Only 20% of Black Americans who think more needs to be done are optimistic; 49% are pessimistic. 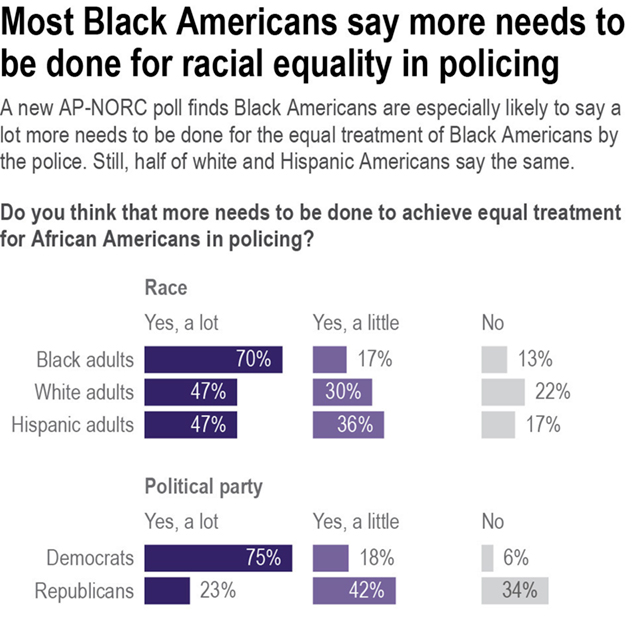 A new AP-NORC poll finds Black Americans are especially likely to say a lot more needs to be done for the equal treatment of Black Americans by the police. Still, half of white and Hispanic Americans say the same.

The AP-NORC poll results reflect what some criminal justice advocates have warned elected leaders about for more than a year: that unless something definitive is done soon to begin transforming police and the criminal justice system, it could become more difficult to mobilize dissatisfied Black voters in the midterm elections.

And already, Democrats' pivot to the center on racial justice issues has given advocates pause. During his first State of the Union address earlier this month, President Joe Biden said the answer to reported rises in violent crime “is not to defund the police.”

“The answer is to fund the police with the resources and training they need to protect our communities,” Biden said in remarks that have been seen as a clear disavowal of some Black Lives Matter activists' rhetoric.

In 2020, following the murder of George Floyd by police in Minneapolis, many Americans across racial and ethnic backgrounds called for criminal justice reforms in nationwide protests. On Capitol Hill, consensus on reforms, via the George Floyd Justice in Policing Act, has not been reached nearly two years later.

“What we saw from the George Floyd case, we in the Black community know that those officers were found guilty because of the outcry,” DeAnna Hoskins, president and CEO of JustLeadershipUSA, a New York-based nonprofit criminal justice reform advocacy group, told the AP.

“The only reason why you get results is because there was an outcry that included Black and white people. You’ve got a much larger voter base saying something has to be done,” she said. 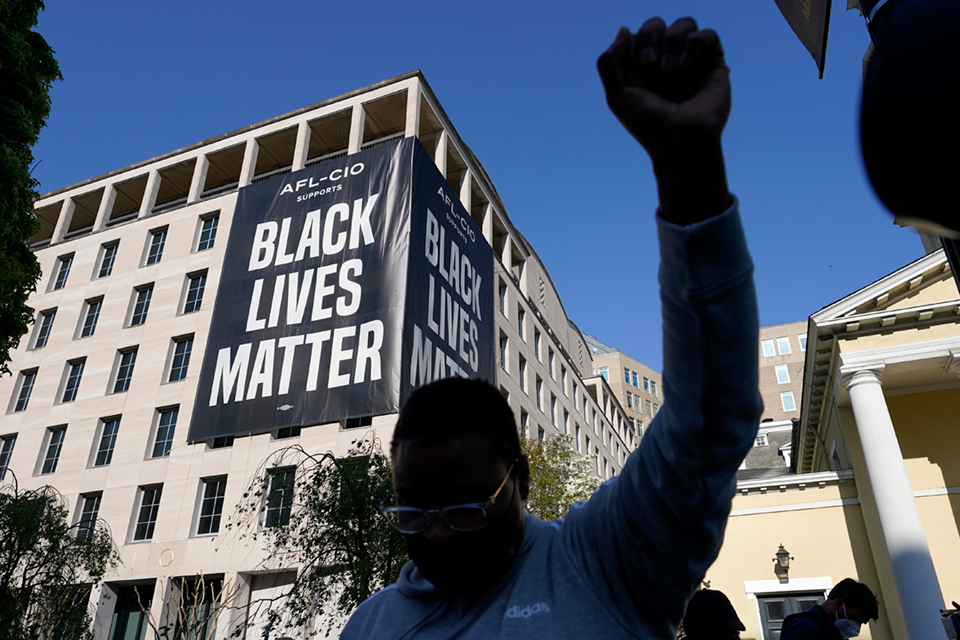 FILE - A person reacts on April 20, 2021, in Washington, at Black Lives Matter Plaza near the White House after the verdict in Minneapolis, in the murder trial against former Minneapolis police officer Derek Chauvin was announced. Few Americans believe there has been significant progress over the last 50 years in achieving equal treatment for Black people in dealings with police and the criminal justice system. That's according to a new poll by The Associated Press-NORC Center for Public Affairs Research. (AP Photo/Alex Brandon, File)

Due to vastly different lived experiences, it’s been harder to get Americans across racial and ethnic groups to sustain their outcries and demand an end to systemic racism, Hoskins added.

And while at least three-quarters of white and Black Americans say more progress is needed, Black Americans are much more likely than white Americans to say a lot more needs to be done, 70% vs. 47%. 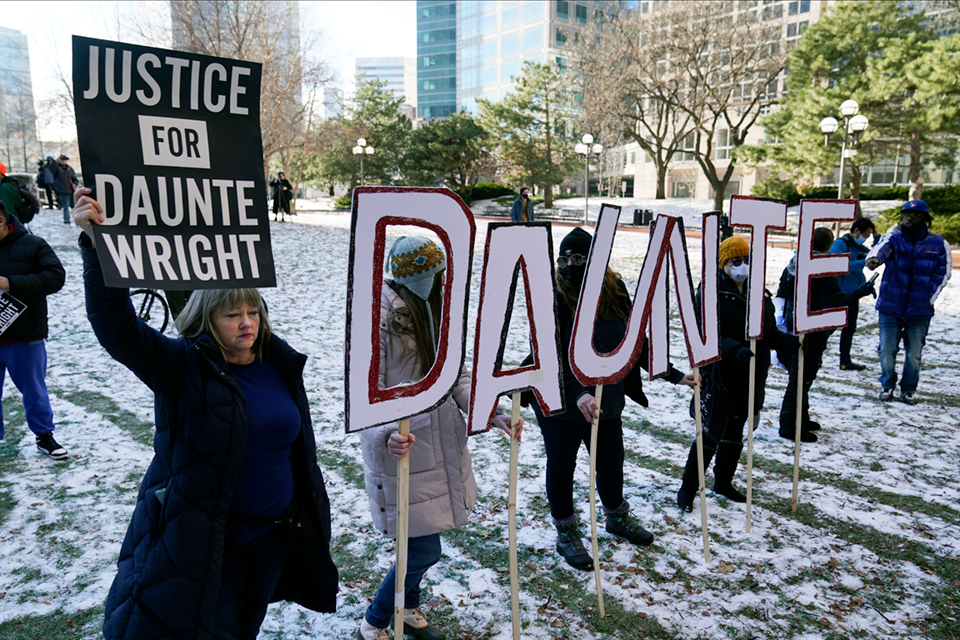 FILE - Demonstrators gather at the Hennepin County Government Center in Minneapolis where jurors found former suburban Minneapolis police officer Kim Potter guilty of first degree and second degree manslaughter in the death of motorist Daunte Wright on Dec. 23, 2021. Few Americans believe there has been significant progress over the last 50 years in achieving equal treatment for Black people in dealings with police and the criminal justice system. That's according to a new poll by The Associated Press-NORC Center for Public Affairs Research.(AP Photo/Jim Mone, File)

Last year marked 50 years since a war on drugs was declared in America. The bipartisan public policy at the federal and state levels saw the nation’s incarceration rate skyrocket to the highest in the industrialized world. Black Americans, in particular, bore the brunt of police militarization and laws that imposed mandatory minimum prison terms.

There were also post-incarceration consequences, such as losing the right to vote, being barred from public housing and certain college financial aid programs, and struggling to find employment with a felony record.

Heydy Maldonado, 30, blames how crime is covered by TV and print news outlets — which she said often frame violence in a way that suggests it is only endemic to Black and Hispanic communities — for the lack of hope in reforms.

“We get targeted,” said Maldonado, whose family is Honduran and Salvadoran.

“I do feel like we need to be united and speak to each other and keep fighting for change,” she added. “Eventually, hopefully, this could all be a thing of the past.”