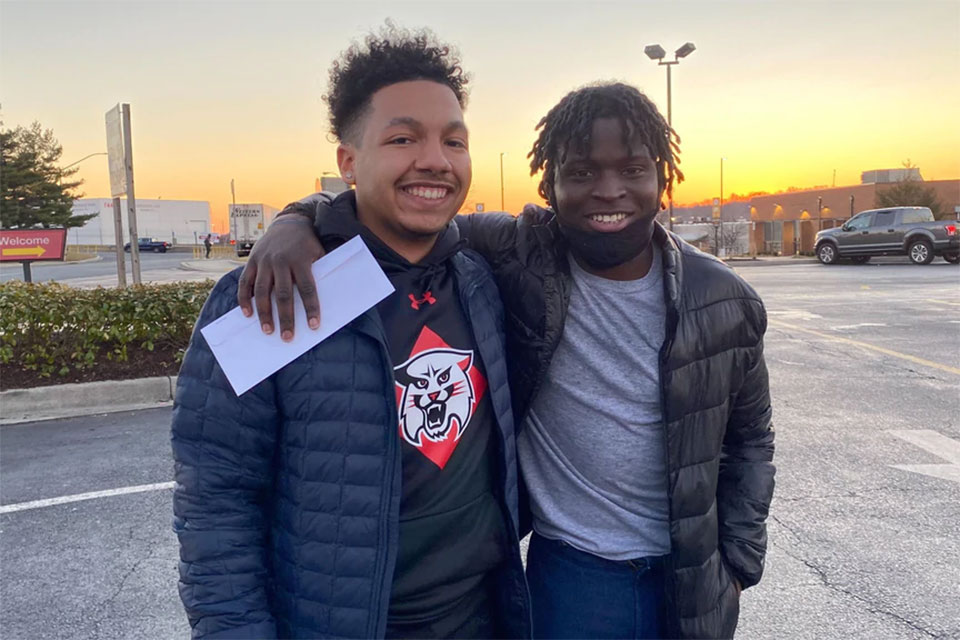 A North Carolina college student created a project that helped get his childhood friend released from prison 12 years early, The Grio reports.

Brandon Harris and Sura Sohna grew up as friends in Annapolis, Maryland, attending both elementary and middle school together. As the boys matured, their lives began to take two very different shapes, Harris eventually receiving a scholarship to an elite private high school, paving the way for his eventual full scholarship offer from Davidson College.

On the contrary, Sohna, who had been in and out of trouble since he was a child, was charged as an adult at the age of 17 on 25 different criminal counts that included burglary and theft. A failure to appear at a 2018 hearing on the burglary charge would earn him a warrant and in 2019, Sonha was pulled over by Maryland State Troopers, arrested on motor vehicle theft charges and detained for his outstanding warrants. In January 2020, he was sentenced to 15 years in prison on one count of burglary.

The ignored and forgotten

By this time, Harris was well into his academic tenure at Davidson College, hearing of his friend’s troubles via the news. He decided to reach out to Sonha, starting with letters and eventually connecting by phone. When Harris got the opportunity to create a research project centered around “telling stories,” Harris chose to tell Sohna’s story, getting the green light from his professor, renowned journalist Ike Bailey, who said he could relate to Harris’ story.

“Originally, I planned to research different stories and write an essay every two weeks, but I quickly realized that in order to do this well, I needed to dive deeper into a single story, instead,” Harris recalled.

“I was a Black man attending Davidson while a loved one was in prison, and I know the shame that can come with that experience. The similarities were too great. If I could help a student deal with this burden he is going through and guide him through this process of investigation and journalism, I knew I had to help,” Bailey told Davidson College.

Harris began by doing research on Sohna’s childhood and subsequent life story, interviewing the victims of his crimes, various police, prosecutors, Sonha and his family. He titled the project, “Telling Stories of the Ignored and Forgotten.” The project culminated at the end of the semester with a two-hour Zoom presentation highlighting his findings and giving first-hand accounts from Sonha about his experience in jail. Harris even petitioned Maryland Governor Larry Hogan so Sonha could attend the presentation from jail.

The presentation caught people’s attention and in December 2021, Sonha’s lawyer petitioned the court to re-examine the 15-year sentence, Harris presenting his findings during the February 8th hearing. Harris argues on behalf of Sonha that while his friend had made bad choices as a result of his turbulent upbringing that included poverty and instability, his choices weren’t indicative of who he was as a person. The judge agreed and subsequently released Sohna on the day of the hearing, the now 23-year-old becoming a free man 12 years earlier as a result of Harris’ work.

"Coming out of prison was] one of the most beautiful days I ever had. It’s like my mind can’t really comprehend everything, but I know it’s go-time now,” Sonha told reporters.

Sura Sohna was released from prison this morning. Sohna’s friend, Brandon Harris, was seated in the courtroom when the decision was read aloud. Harris' advocacy, through his independent study project at Davidson, played a key role in the court’s decision. https://t.co/KPFM2RQGUV

Harris is grateful he was able to help and sees his friend’s story as a cautionary tale to never count anyone out.

“We’re so quick to judge a person based on one action or one decision. I believe everyone is a product of their own experiences, and we’ve moved away from trying to understand where people are coming from. Sura has great potential in his life; he just needs people who believe in him,” said Harris.

Check out the full presentation from Brandon Harris below.