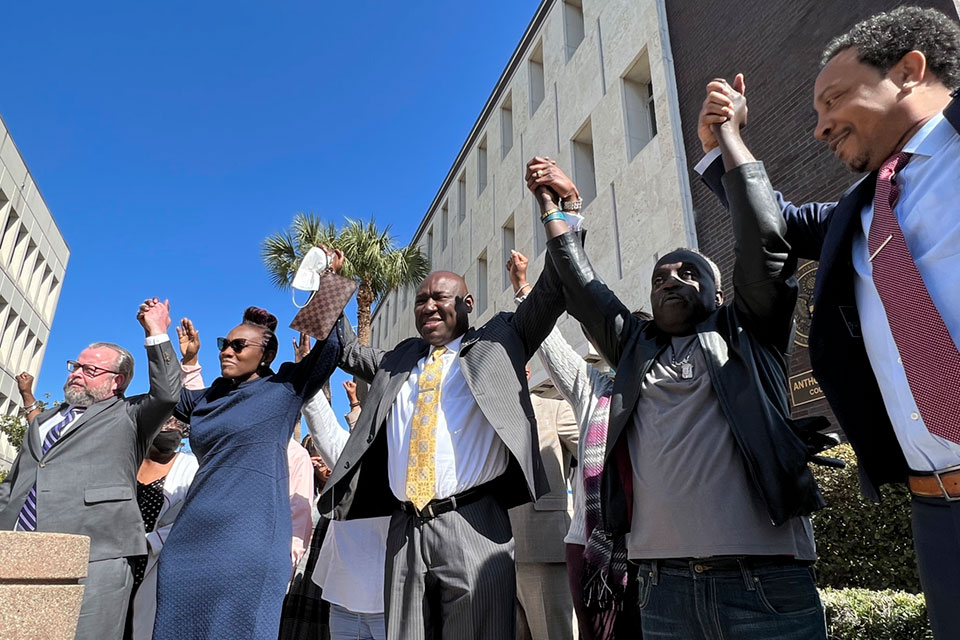 BRUNSWICK, Ga. (AP) — The three white men convicted of murder in Ahmaud Arbery’s fatal shooting were found guilty of federal hate crimes Tuesday for violating Arbery’s civil rights and targeting him because he was Black.

The jury also found father and son Greg and Travis McMichael and neighbor William “Roddie” Bryan guilty of attempted kidnapping, and the McMichaels guilty of the use of a firearm in the commission of a violent crime.

The verdict was a symbolic one, coming just months after all three defendants were convicted of murder in a Georgia state court and sentenced to life in prison — for the McMichaels without the possibility of parole and for Bryant, only after he has served 30 years. But family and community members viewed the hate crimes trial as an important statement that racism motivated the killing.

The jury delivered its verdict one day before the second anniversary of Arbery's death on Feb. 23, 2020.

Shortly after the verdict was read, Arbery's parents emerged from the courthouse holding hands with attorney Ben Crump, then raised their clasped hands to cheers from supporters.

said Arbery's mother, Wanda Cooper-Jones. But, she added, “We as a family will never get victory because Ahmaud is gone forever."

During the trial, prosecutors showed roughly two dozen text messages and social media posts in which Travis McMichael and Bryan used racist slurs and made derogatory comments about Black people. The FBI wasn’t able to access Greg McMichael’s phone because it was encrypted.

The attack on Arbery

The McMichaels grabbed guns and jumped in a pickup truck to pursue Arbery after seeing him running in their neighborhood outside the Georgia port city of Brunswick in February 2020. Bryan joined the pursuit in his own pickup and recorded cellphone video of Travis McMichael fatally shooting Arbery. The killing became part of a larger national reckoning on racial injustice after the graphic video leaked online two months later.

Defense attorneys contended the three didn’t chase and kill Arbery because of his race but acted on the earnest, though erroneous, suspicion that Arbery had committed crimes in their neighborhood.

The McMichaels and Bryan had pleaded not guilty to the hate crime charges.

The panel of eight white people, three Black people and one Hispanic person received the case Monday following a weeklong trial in U.S. District Court in the port city of Brunswick. The jurors adjourned for the night after about three hours of deliberations, and then deliberated for about an hour Tuesday morning.

The trial closed Monday with prosecutors saying the 25-year-old Arbery's slaying on a residential street was motivated by “pent-up racial anger,” revealed by the defendants' electronic messages as well as by witnesses who testified to hearing them make racist tirades and insults.

“All three defendants told you loud and clear, in their own words, how they feel about African Americans,” prosecutor Tara Lyons told the jury Monday.

Defense attorneys insisted that past racist statements by their clients offered no proof they violated Arbery’s civil rights and targeted him because he’s Black. They urged the jury to set aside their emotions.

“It’s natural for you to want retribution or revenge,” said Pete Theodocion, representing William “Roddie” Bryan. “But we have to elevate ourselves ... even if it’s the tough thing.”

The slaying of Arbery nearly two years ago, on Feb. 23, 2020, was captured in a graphic cellphone video that sparked widespread outrage. Father and son Greg and Travis McMichael armed themselves after spotting Arbery running past their home and chased him in a pickup truck. Bryan joined his neighbors in his own truck and recorded the video of Travis McMichael firing at point-blank range.

Police found Arbery had no weapon and no stolen items. Prosecutors said he was merely out jogging.

Travis McMichael’s attorney, Amy Lee Copeland, told the jury that prosecutors presented no evidence that he “ever spoke to anyone about Mr. Arbery’s death in racial terms.” She said her client opened fire in self-defense after Arbery tried to take away his shotgun.

Greg McMichael’s attorney, A.J. Balbo, argued that his client initiated the chase not because Arbery was a Black man, but because he was “THE man” the McMichaels had seen in security camera videos taken from a nearby house under construction.

The McMichaels and Bryan, convicted of murder last fall in a Georgia state court, pleaded not guilty to the federal charges.

FBI agents uncovered roughly two dozen racist text messages and social media posts from the McMichaels and Bryan in the years and months preceding the shooting.

For instance, in 2018, Travis McMichael commented on a Facebook video of a Black man playing a prank on a white person: “I’d kill that f----ing n----r.”

Some witnesses testified they heard the McMichaels' racist statements firsthand. A woman who served under Travis McMichael in the U.S. Coast Guard a decade ago said he called her “n——r lover,” after learning she'd dated a Black man. Another woman testified Greg McMichael had ranted angrily in 2015 when she remarked on the death of civil rights activist Julian Bond, saying, “All those Blacks are nothing but trouble.”