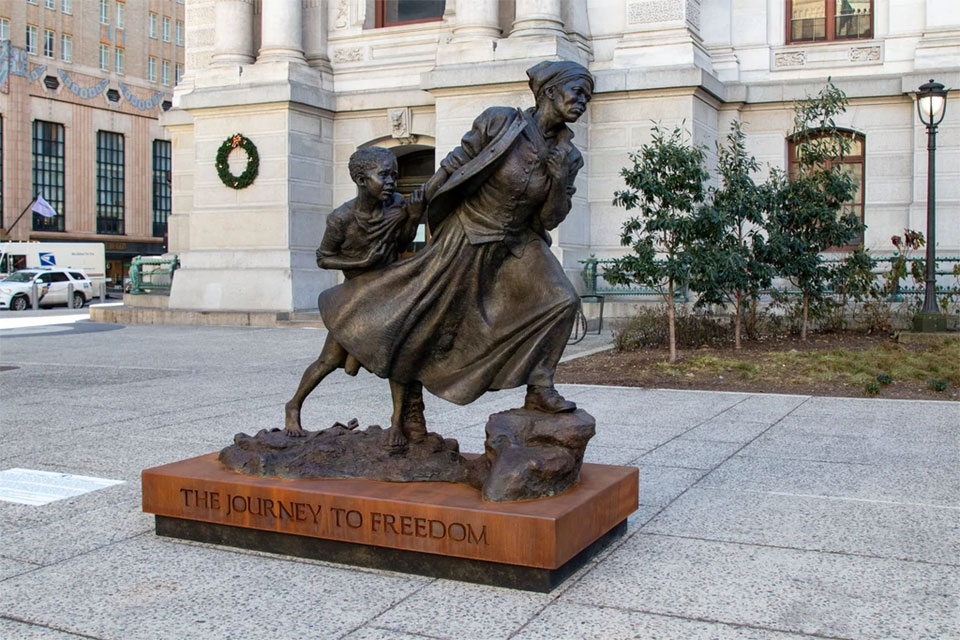 Recently, a new nine-foot statue of Harriet Tubman was unveiled by the City of Philadelphia in front of City Hall. “The Journey to Freedom” sculpture from artist Wesley Wofford pays honor to Tubman’s fight for freedom, depicting her leading an enslaved girl to freedom carrying a satchel, her skirt billowing in the wind.

The unveiling of the statue marks the beginning of more than 30 locally sponsored programs planned around Tubman and her work during Black History Month and Women’s History Month celebrating her life and legacy. The abolitionist’s 200th birthday is also expected to be commemorated. Tubman found safety in the city of Philadelphia after escaping from enslavement in Maryland. There, she found community and also planned many of her returning trips to free others from slavery on the Underground Railroad.

Mayor Jim Kenney spoke about the significance of hosting the statue in the city of brotherly love, saying, “It’s an honor to celebrate the life and legacy of Harriet Tubman here in Philadelphia. Telling these stories through public art is vital for learning and reflection, connecting with our communities, and understanding our histories. I am particularly proud that the City of Philadelphia is hosting the temporary installation of Harriet Tubman on the North apron of City Hall.”

Throughout February and March, there will be virtual and in-person events highlighting various themes including activism, human rights, freedom, and women equality. The city will also hold a screening of the 2019 film “Harriet.” The statue is currently on a traveling exhibition, Philadelphia being the most recent host city, Wofford lending the statue to other states and institutions who would like to host it through 2023.

“I am honored that the City of Philadelphia is hosting my sculpture ‘The Journey to Freedom.’ Philadelphia holds a specific relevance to Harriet’s story…To be able to help amplify Harriet Tubman’s heroism and determination in a world that desperately needs her ideals is one of the greatest honors of my life,” said Wofford.

“Harriet Tubman’s legacy as an abolitionist, political activist, liberator, nurse, hero, and human rights advocate has made her an icon of courage and determination. These values are what we want represented when people visit City Hall. I hope the presence of this monument reminds Philadelphians of the importance of taking action to improve our communities and fosters a pride of place,” said Tuman Alexander, managing director for the City of Philadelphia.

“The Journey to Freedom” sculpture will be displayed now through March 31st. To learn about the full schedule of celebratory events visit www.creativephl.org.