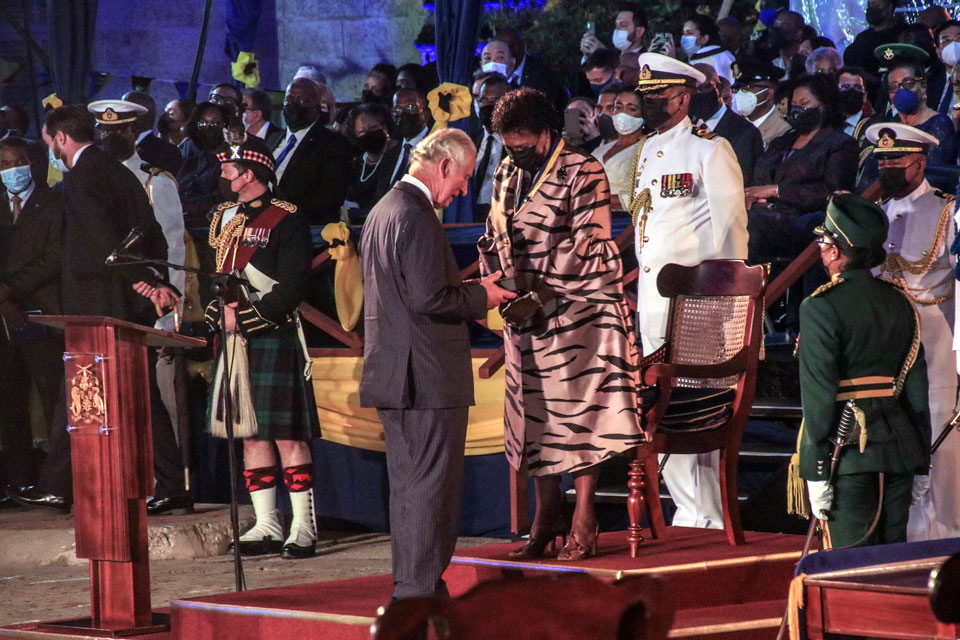 SAN JUAN, Puerto Rico (AP) — Barbados stopped pledging allegiance to Queen Elizabeth II on Tuesday as it shed another vestige of its colonial past and became a republic for the first time in history.

Several leaders, dignitaries and artists, including Prince Charles and Rihanna, attended the ceremony that began late Monday in a popular square where the statue of Britain's Lord Nelson was removed last year amid a worldwide push to erase symbols of oppression. 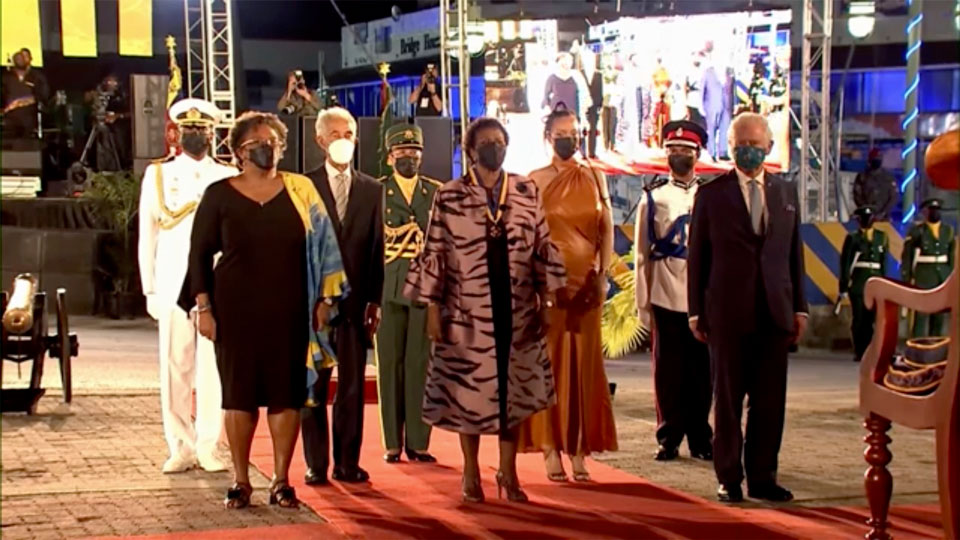 In this image made from video provided by Prime Minister's office, Barbados' Prime Minister Mia Mottley, left, former cricketer Garfield Sobers, center left, President Sandra Mason, center, singer Rihanna Fenty, center right, and Prince Charles, right, attend the presidential inauguration ceremony in Bridgetown, Barbados on Tuesday Nov. 30, 2021. Barbados stopped pledging allegiance to Queen Elizabeth II on Tuesday as it shed another vestige of its colonial past and became a republic for the first time in history.(Prime Minister's Office via AP)Fireworks peppered the sky at midnight as Barbados officially became a republic, with screens set up across the island so people could watch the event that featured an orchestra with more than 100 steel pan players and numerous singers, poets and dancers. It was also broadcast online, prompting a flurry of excited messages from Bajans living in the U.S., Canada and beyond.

“Happy Independence Day and freedom to all,” wrote one viewer.

The drive to become a republic began more than two decades ago and culminated with the island’s Parliament electing its first ever president last month in a two-thirds majority vote. Barbados Governor General Sandra Mason was sworn in before dawn on Tuesday as the island marked its 55th anniversary of independence from Britain. 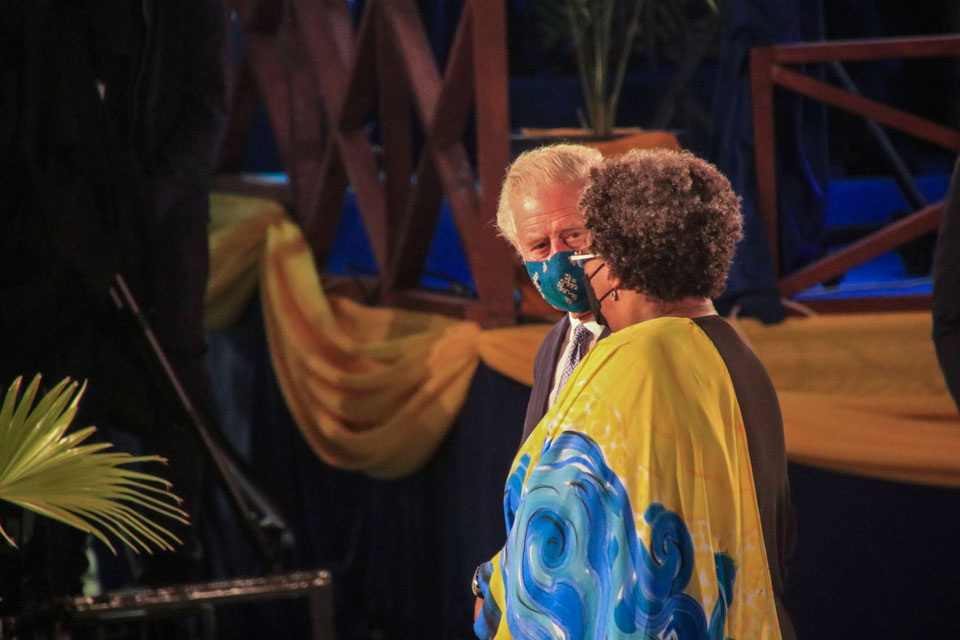 Barbados' Prime Minister Mia Mottley, front, talks with Prince Charles during the presidential inauguration ceremony in Bridgetown, Barbados on Tuesday Nov. 30, 2021. Barbados stopped pledging allegiance to Queen Elizabeth II on Tuesday as it shed another vestige of its colonial past and became a republic for the first time in history.(AP Photo / David McD Crichlow)“As cautioned by our first prime minister ... we ought no longer to be found loitering on colonial premises,” she said. “We must seek to redefine our definition of self, of state, and the Barbados brand, in a more complex, fractured and turbulent world. ... Our country and people must dream big dreams and fight to realize them.”

Mason, 72, is an attorney and judge who also has served as ambassador to Venezuela, Colombia, Chile and Brazil. She will help Prime Minister Mia Mottley lead the wealthy Caribbean island of more than 300,000 people that is dependent on tourism, manufacturing and finance.

Barbados didn't need permission from the U.K. to become a republic, although the island will remain a member of the Commonwealth Realm. It’s an event that the Caribbean hasn't experienced since the 1970s, when Guyana, Dominica and Trinidad and Tobago became republics.

Barbados became independent from the United Kingdom in November 1966, more than three centuries after English settlers arrived and turned the island into a wealthy sugar colony based on the work of hundreds of thousands of African slaves.

In recent decades, the island has begun distancing itself from its colonial past. In 2005, Barbados dropped the London-based Privy Council and chose the Trinidad-based Caribbean Court of Justice as its final court of appeal. Then in 2008, it proposed a referendum on the issue of becoming a republic, but it was pushed back indefinitely. Last year, Barbados announced plans to stop being a constitutional monarchy and removed a statue of British Vice-Admiral Horatio Nelson from National Heroes Square, the location of the event to celebrate becoming a republic. 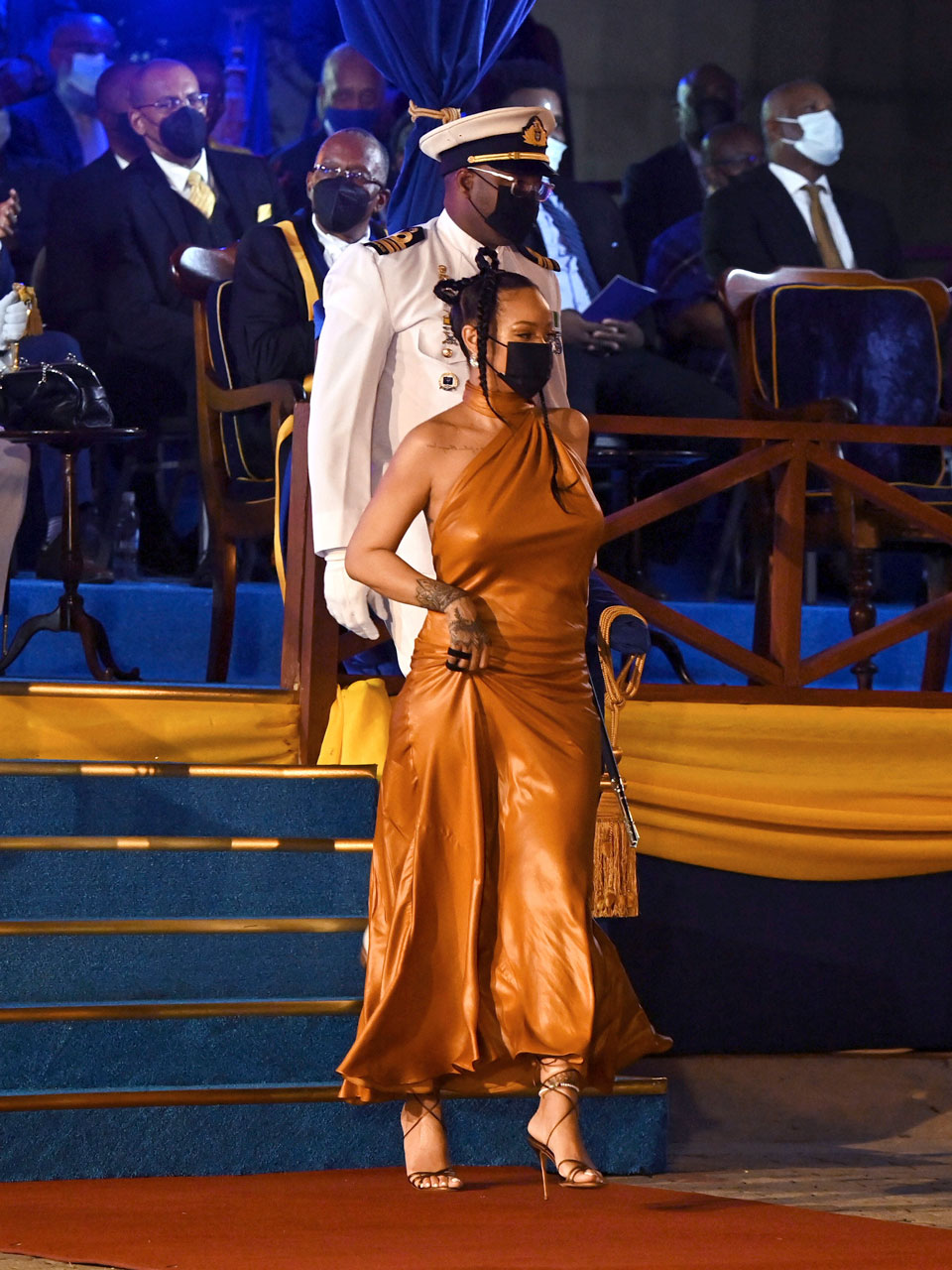 Barbadian singer Rihanna, honoured as a National Hero, attends the Presidential Inauguration Ceremony, at Heroes Square, in Bridgetown, Barbados, Tuesday, Nov. 30, 2021. Barbados has stopped pledging allegiance to Queen Elizabeth II as it shed another vestige of its colonial past and became a republic for the first time in history. Several leaders, dignitaries and artists, including Prince Charles, attended a ceremony that began late Monday and stretched into Tuesday in a popular square where the statue of a well-known British lord was removed last year amid a worldwide push to erase symbols of oppression. (Jeff J Mitchell PA via AP)“From the darkest days of our past and the appalling atrocity of slavery, which forever stains our history, the people of this island forged their path with extraordinary fortitude,” said Prince Charles, who thanked Barbadian officials for inviting him and said he has greatly admired what they've achieved. “Freedom, justice, and self determination have been your guides.”

During the ceremony, the prime minister awarded pop star Rihanna the honor of national hero of Barbados that comes with the title, “the right excellent.”

"May you continue to shine like a diamond and bring honor to your nation by your words, by your actions, and to do credit wherever you shall go. God bless you, my dear,” Mottley told the singer, who placed her palm over her heart and said thank you.

As the ceremony ended, officials lowered the Queen's royal standard for the last time in Barbados. In a statement, Queen Elizabeth II congratulated the island for its “momentous day,” and said she looked forward to an ongoing friendship between the two nations.

“It is the beginning of a new era,” he wrote. “Any Barbadian can aspire now to be our Head of State.”