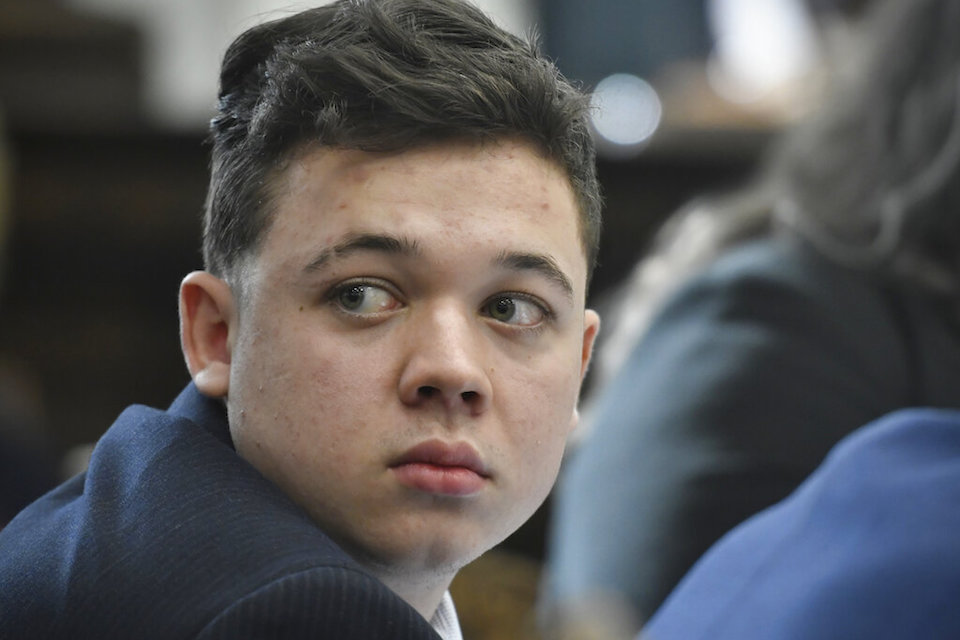 MADISON, Wis. (AP) — Prosecutors trying to convict Kyle Rittenhouse of murder have been working to paint him as an inexperienced teenager who misrepresented his age and medical training to other armed civilians in his group on the night he shot three men during a protest against police brutality in Wisconsin last year.

Assistant District Attorney Thomas Binger has drawn out testimony during the first week of Rittenhouse's trial from several witnesses, including two military veterans, saying the Illinois teen appeared inexperienced, that he falsely claimed that he was old enough to possess a gun and that he was a certified medic when he was really just a lifeguard.

Phil Turner, a former federal prosecutor and attorney in Chicago who isn’t involved in the case, said Binger is trying to show jurors that Rittenhouse didn't know what he was doing and that they shouldn't believe his self-defense claims.

“In terms of how he reacted, they want to show it in context that he's young and he's not experienced and would be more likely to perceive (the protest) as a more threatening situation (than an older person),” Turner said.

Rittenhouse brought a semi-automatic rifle to the protest in Kenosha in August 2020.

The city on the Wisconsin-Illinois border was in the throes of several nights of chaotic demonstrations after a white police officer shot Jacob Blake, a Black man, who was resisting arrest during a domestic dispute. Rittenhouse was 17 years old at the time and said he had gone to Kenosha to protect downtown businesses from looters.

Just before midnight, he shot Joseph Rosenbaum, killing him, after Rosenbaum chased him into a parking lot. Bystander video shows a crowd chasing Rittenhouse down the street. In a matter of seconds an unidentified man tried to kick him in the head,

Anthony Huber hit him in the head with a skateboard and Gaige Grosskreutz charged him with a pistol. Rittenhouse fired at the man who kicked him but missed, shot and killed Huber and wounded Grosskreutz in the arm.

Prosecutors have charged Rittenhouse with multiple counts, including homicide and being a minor in possession of a firearm. Rittenhouse has argued that he shot the men in self-defense.

That means his attorneys must persuade jurors that he reasonably believed his life was in danger and that the amount of force he used was reasonable. Binger maintains that Rittenhouse was the aggressor and overreacted to the situation.

Claimed to be an emergency medical technician

Ryan Balch, a former U.S. Army soldier who served in Iraq and Afghanistan, testified Thursday that he traveled to Kenosha on the night of the shootings armed with a semi-automatic rifle and a pistol to help protect businesses, and that he met Rittenhouse there.

Balch later told FBI investigators that Rittenhouse seemed very interested in him and his military deployments. He said Rittenhouse told him that he was 19 and a certified emergency medical technician; he was actually a lifeguard at a recreational complex in nearby Pleasant Prairie, which is between Kenosha and Rittenhouse’s hometown of Antioch, Illinois.

“He seemed like a young and impressionable kid,” Balch said. “He seemed a little under-equipped and under-experienced as well, which is one of the reasons we kind of stayed with him.” Balch did not say why he felt Rittenhouse was under-equipped.

Balch said he kept an eye on Rittenhouse throughout the evening, protecting him as Rittenhouse walked around shouting that he was a medic and could help anyone who was injured. Balch recounted one protester insulting Rittenhouse with profanity and Rittenhouse yelling back “I love you, too, ma'am.” Balch said he told him not to respond because it would only antagonize the crowd further.

“That's when I told him, 'hey, don't say that,'” Balch testified. “It can cause somebody to escalate the situation if they feel like you're making fun of them a little bit. So, just wasn't needed.”

Rosenbaum not a threat

Former Marine Jason Lackowski testified Friday that he also traveled to Kenosha armed with a semi-automatic rifle and a knife to protect businesses.

He said Rittenhouse introduced himself and said he was an emergency medical technician. Rittenhouse didn't say how old he was, but Lackowski testified that he thought Rittenhouse was at least 18 because minors can't possess firearms in Wisconsin and he thought a person had to be 18 to get an EMT license.

He went on to testify that Rosenbaum was acting “belligerently," tried to start fights with Lackowski's group and asked members of the group to shoot him. He said he didn't consider Rosenbaum a threat to him or anyone else, however.

Richie McGinniss, a videographer for the conservative website The Daily Caller, testified Thursday that he met Rittenhouse while documenting the protest and asked him how old he was.

“I believe the response was something along the lines of ‘I’m an adult,'” McGinniss said. “I actually told police the night of that I believe that he was in his mid-20s. But I believe I said exactly that he had a baby face.”

Defense will play on Rittenhouse's youth

Rittenhouse's attorneys pushed back at any suggestion that Rittenhouse overreacted to a non-threat. They noted that Lackowski's encounter with Rosenbaum occurred in a group setting and that he never faced Rosenbaum one-on-one like Rittenhouse did.

When defense attorney Corey Chirafisi asked Lackowski if he would feel threatened if Rosenbaum charged him at full speed and tried to take his gun, Lackowski responded, “Yes.”

But Rittenhouse's team left unchallenged the testimony that Rittenhouse had lied about his age and his medical certification and that he appeared inexperienced.

Turner, the Chicago attorney, said the defense may be content to let jurors believe Rittenhouse is basically just a kid.

“If I was defending this case, I would be happy with that because it's true. He's young and inexperienced and that goes to your intent to kill because you perceive a situation as being dangerous,” Turner said. “His youth actually helps him. If it's an older person, then they think ‘this guy knows better.’”