'I Am a Child!' Pepper Spray Reflects Policing of Black Kids 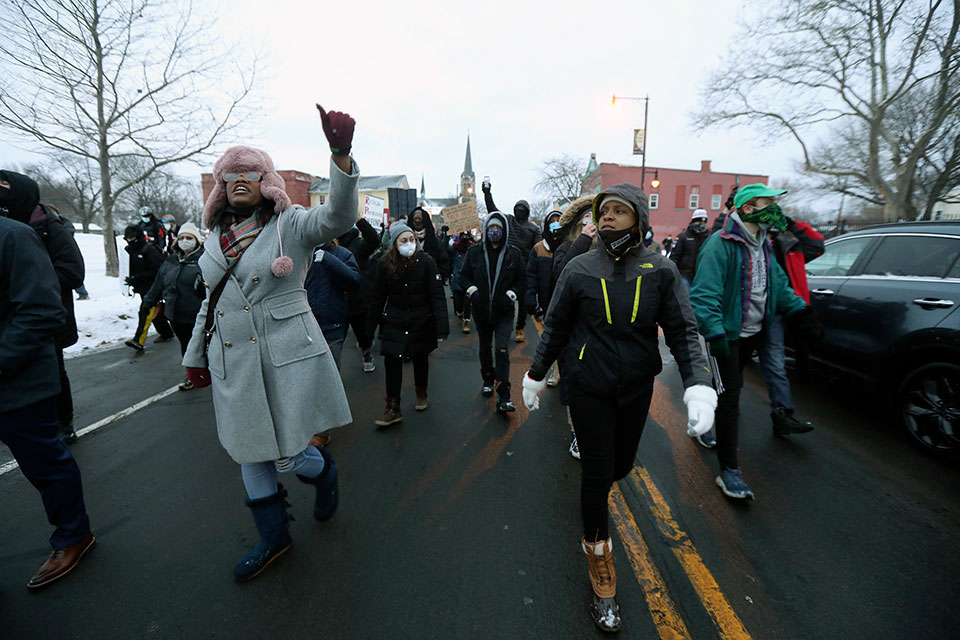 The 9-year-old Black girl sat handcuffed in the backseat of a police car, distraught and crying for her father as the white officers grew increasingly impatient while they tried to wrangle her fully into the vehicle.

“This is your last chance,” one officer warned. “Otherwise pepper spray is going in your eyeballs.”

Less than 90 seconds later, the girl had been sprayed and was screaming, “Please, wipe my eyes! Wipe my eyes, please!”

What started with a report of “family trouble” in Rochester, New York, and ended with police treating a fourth-grader like a crime suspect, has spurred outrage as the latest example of law enforcement mistreatment of Black people.

As the U.S. undergoes a new reckoning on police brutality and racial injustice in the wake of George Floyd's death last May, the girl's treatment illustrates how even young children are not exempt.

Research shows Black children are often viewed as being older than they are, and are more likely to be seen as threatening or dangerous. Advocates have long said that leads to police treating them in ways they wouldn’t dream of treating white children. In some cases it has led to fatalities like the killing of Tamir Rice, a Black 12-year-old shot by a white police officer in Cleveland in 2014.

“Black children have never been given their opportunity to be children,” said Kristin Henning, law professor and director of the Juvenile Justice Clinic and Initiative at Georgetown Law.

A study published in the journal Pediatrics in late 2020 found Black children and teenagers were six times as likely to die from police gunfire as white children. It analyzed data from police use of force in situations involving young people between the ages of 12 and 17 from 2003 to 2018.

The headlines from Rochester were deeply personal for Mando Avery, whose 7-year-old son was hit by pepper spray from a police officer aiming at someone else during a protest in Seattle last summer. The spray left his son's face and chest painful and swollen from chemical burns for several days, and even required a visit to the emergency room.

He has since had nightmares and now fears police. Small things can bring back bad memories, like using a spray bottle to do his hair.

“Their innocence goes away much, much sooner,” Avery said.

“What kind of temper tantrum leads to handcuffing a child?”

In the Rochester case, the girl's mother called police on Jan. 29 after an argument with her spouse and said she asked officers to call mental health services when her daughter grew increasingly upset.

But police body camera video shows only officers at the scene, first handcuffing the girl's hands behind her back and then growing increasingly impatient as they tried to get her into the police car, culminating in the pepper spray.

There's a point in the video when an officer says, “You're acting like a child!” to which the girl replies, “I am a child!”

The officers have been suspended pending an investigation. More video footage released Thursday showed the wait until an ambulance arrived for the girl.

The case comes months after the high-profile death last spring of Daniel Prude, a Black man undergoing a mental health crisis when his family called the Rochester police. Officers handcuffed him, then put a hood over his head when he spit at them. As he struggled, they pinned him face down on the ground, one officer pushing his head to the pavement until he stopped breathing.

The 9-year-old girl's mother, Elba Pope, told The Associated Press she didn’t think the white officers saw her daughter the same way they would have seen a white child.

“Had they looked at her as if she was one of their children, they wouldn’t have pepper-sprayed her,” she said.

Henning agreed. “This is where the question of race comes into play,” she said. “If that child had looked like one of their little girls, looked like the little child that they tucked into bed, it is far less likely that they would have done that.”

The president of the Rochester police union has said the officers didn't lack compassion but were dealing with a difficult situation with limited resources and were following department protocol.

New York isn't the only place where police treatment of Black children has been a flashpoint.

In suburban Denver, four Black girls aged 6 to 17 were detained by police at gunpoint after they were wrongly suspected of being in a stolen car last year.

One officer tried to handcuff the 6-year-old, who was wearing a tiara for what was supposed to be a girls' day out with her relatives, but the cuffs were too big, according to a lawsuit filed by the family.

In North Texas, a white police officer was recorded on video pushing a swimsuit-clad Black girl to the ground at a pool party in 2015. Later that year, a sheriff’s deputy at a school in South Carolina flipped a girl to the floor and dragged her across a classroom after she refused to surrender her cellphone in math class.

In Tamir Rice's case, the 12-year-old was playing with a toy gun in November 2014 when Cleveland police responding to a call pulled up and within seconds, shot him. When his 14-year-old-sister ran to the scene, she was pushed to the ground and handcuffed. The officers were not indicted.

It's that history that makes Christian Gibbs, a Black father of three daughters, grateful the girl in Rochester wasn't more grievously injured — and angered that's even a worry.

“Thank God she wasn’t killed. ... And the fact that we have to say that is already an indictment of the type of treatment that we expect to be doled out, even to little children,” said Gibbs, 46, of Bowie, Maryland.

Holly M. Frye, of South Ogden, Utah, said she has near-daily conversations with her three children about how to act around police officers, the same kind of conversations her parents had with her.

“This sort of aggression toward the Black race has always been in existence, it’s just being recorded now,” she said.

“It’s a topic that never leaves our kitchen table, we’re always constantly talking about it.”

While data is scarce on very young children's interactions with police, Black youths are nearly five times as likely to be incarcerated compared with white young people, according to an analysis by the nonprofit The Sentencing Project.

The incarceration rate for white youth is 83 per 100,000; for Black youths that number jumps to 383, The Sentencing Project found. While that is partly due to differences in offending, studies have found teenagers of color are more likely to be arrested and more likely to face severe consequences compared with their white peers, the report said.

And it's not just policing and the criminal justice system. Black students face higher rates of suspension and expulsion from school, said Judith Browne Dianis, executive director of the Advancement Project, which fights against structural racism.

It's “the way that our Black children are questioned by adults, with this underlying assumption that they are not to be believed, and they’re not to be trusted, and that they’re always up to something wrong,” she said.

That leads to trauma and mistrust on the part of Black youth toward the authorities around them, she said.

“There is no ‘Officer Friendly' for Black kids,” she said.