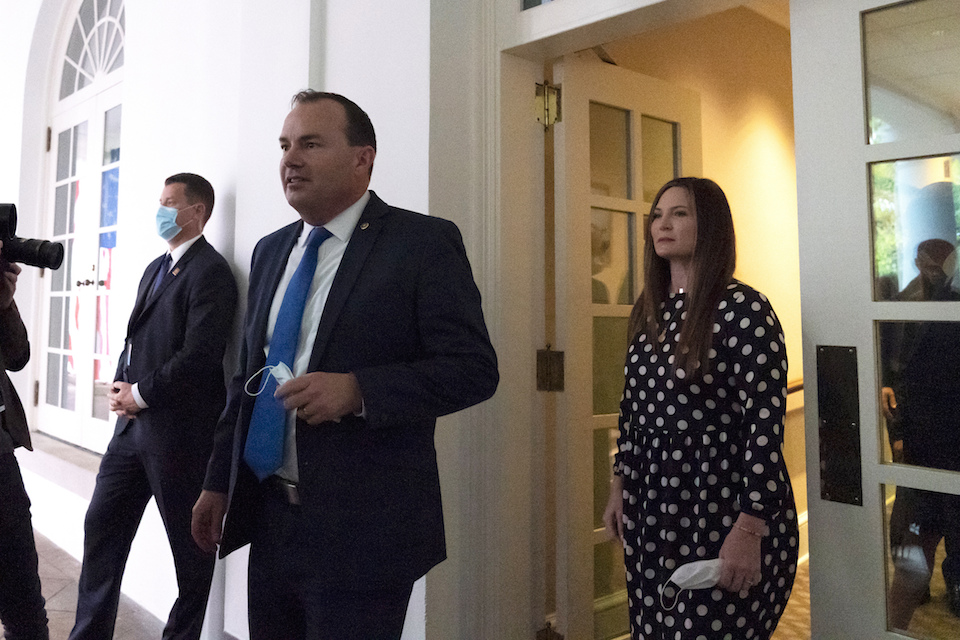 WASHINGTON (AP) — Two Republican members of the Senate Judiciary Committee have tested positive for the coronavirus, raising questions about the timing of Supreme Court confirmation hearings for Judge Amy Coney Barrett and whether additional senators may have been exposed.

The positive tests come as Senate Republicans are pushing to quickly confirm Barrett in the few weeks they have before the Nov. 3 election. There is little cushion in the schedule set out by Judiciary Committee Chairman Lindsey Graham and McConnell, who want to put a third Trump nominee on the court immediately in case they lose any of their power in the election.

Democrats, many of whom have been critical of Barrett, seized on the virus announcements to call for a delay in the hearings.

"We now have two members of the Senate Judiciary Committee who have tested positive for COVID, and there may be more," tweeted Senate Democratic leader Chuck Schumer.

"I wish my colleagues well. It is irresponsible and dangerous to move forward with a hearing, and there is absolutely no good reason to do so."

Several other members of the Judiciary panel attended the White House ceremony, including Missouri Sen. Josh Hawley, Nebraska Sen. Ben Sasse, Tennessee Sen. Marsha Blackburn and Idaho Sen. Mike Crapo. Blackburn said she tested negative after the event. Crapo said he "recently" had a negative test and a spokeswoman said he would be getting another one as soon as it could be arranged. A spokeswoman for Hawley said he was being tested Saturday, and the senator tweeted later that his coronavirus test came back negative.

Sasse tested negative, but said in a statement that he would work remotely from his home state and undergo further testing due to his "close interaction with multiple infected individuals," his office said. He said he planned to to return to Washington in time for the confirmation hearing.

Graham was not at the White House on Saturday but sees Trump frequently. He said Friday that he had taken a test after interacting with Lee and it was negative.

A spokeswoman for another GOP member of the committee, Texas Sen. Ted Cruz, said Saturday that he had also interacted with Lee and had also tested negative. Still, Cruz's office said he is remaining at home until the hearings out of an abundance of caution.

Confirmation hearings for Barrett, who would replace the late Justice Ruth Bader Ginsburg, are scheduled to last for four days.

McConnell on Saturday announced that he would seek to delay floor action for the next two weeks but that the hearings would proceed. At an event in Kentucky on Friday, he said he thought remote hearings could work if some senators couldn't attend.

Graham also suggested the possibility of remote hearings, saying on Twitter that "any senator who wants to participate virtually will be allowed to do so." In a statement Saturday, Graham said there would be "no change" in the hearings even if Senate floor votes were delayed.

It is not unusual for committees to meet when there is no action on the floor.

Senators cannot vote virtually, however, so Republicans would need a full slate of committee members to approve the nomination shortly after the hearings and all of their senators on the floor for a final confirmation vote, which they hope will happen the last week of October.

After interacting with Sen. Lee, in consultation with the attending physician, Sen. Cruz is remaining at home out of an abundance of caution. He feels healthy, hasn't exhibited any COVID-19 symptoms, and has tested negative.

In accordance with medical advice he will return to the Senate for the Supreme Court nomination hearings."

Sen. Ron Johnson, R-Wis., also announced Saturday that he tested positive for the virus and would not return until he was cleared by his doctor. He is not on the Judiciary panel, but his presence would likely be needed for a floor vote.

Tillis is in a competitive reelection race against Democrat Cal Cunningham, and the two debated Thursday evening. On Twitter, Cunningham said he wished Tillis a quick recovery and said he would also get tested.

Barrett, who was with Trump and many others on Saturday and met with Lee, Tillis and other members of the Judiciary panel this week, tested negative, the White House said Friday. It was confirmed that she had a mild case of COVID earlier this year and has now recovered.

Trump, who has consistently downplayed the virus and often discouraged the use of masks, was flown to Walter Reed on Friday evening after experiencing symptoms.

The president tweeted Saturday that he was "feeling well," though White House chief of staff Mark Meadows said the next 48 hours would be critical in terms of his care