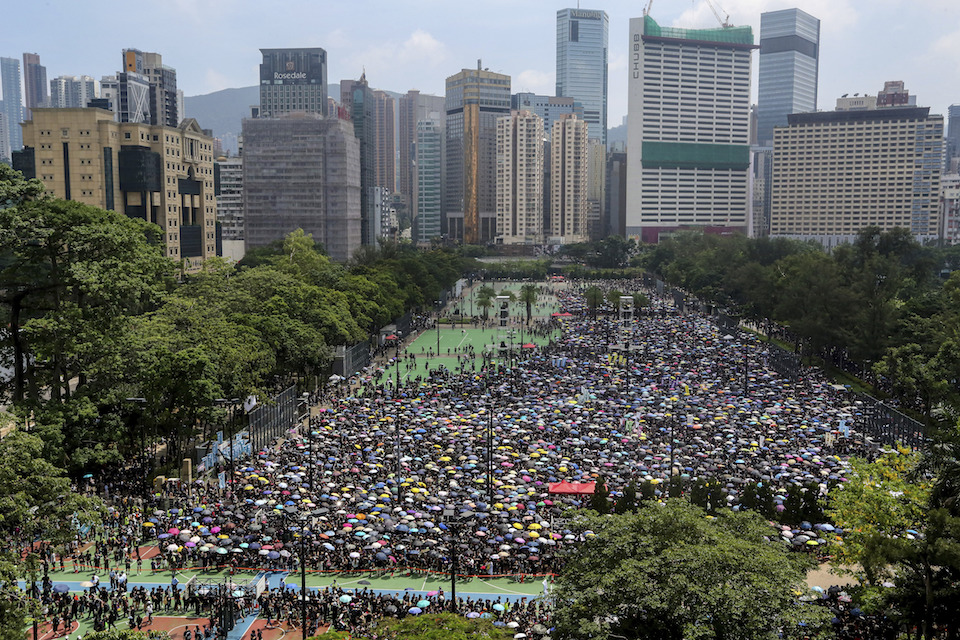 HONG KONG (AP) — Tens of thousands of Hong Kong residents, mostly in black, jammed the city's streets Sunday in a march protesting the government's handling of a proposed extradition bill, which would allow suspects to be sent to Macau, Taiwan or China.

China has been excluded from Hong Kong's extradiction agreements until now over concerns about human rights and lack of judicial independence.

The crowds, walking slowly and shouting "withdraw" and "resign," spilled into the streets from downtown Victoria Park and began marching toward the Central district where the government headquarters is located.

The demonstrators carried banners demanding that Chief Executive Carrie Lam resign and drop the legislation completely instead of just suspending it as she announced Saturday.

"Our demands are simple. Carrie Lam must leave office, the extradition law must be withdrawn and the police must apologize for using extreme violence against their own people," said bank worker John Chow as he marched with a group of his friends.

"And we will continue," he said. 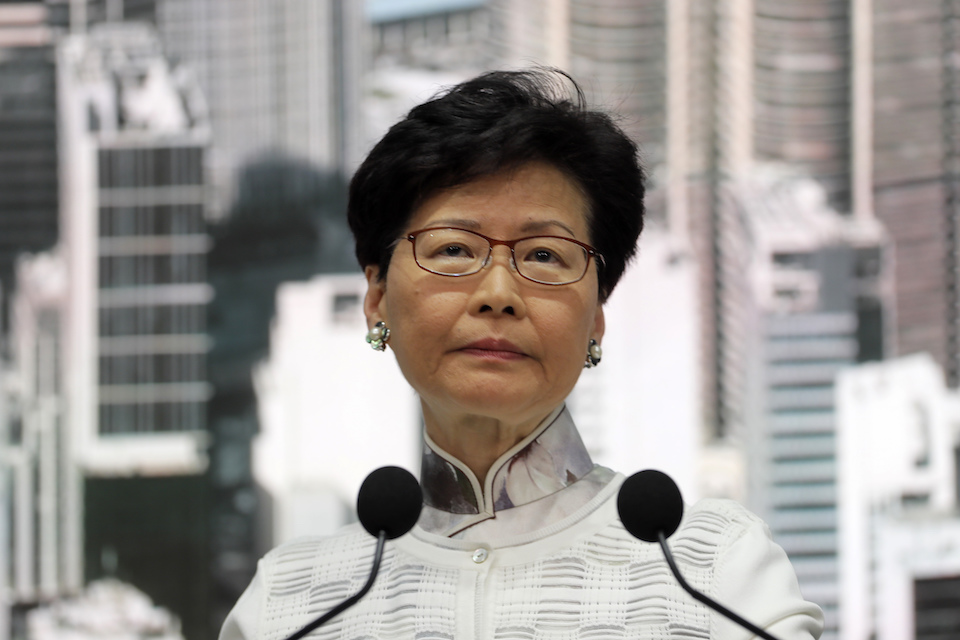 Hong Kong's Chief Executive Carrie Lam speaks at a press conference, Saturday, June 15, 2019, in Hong Kong. Lam said she will suspend a proposed extradition bill indefinitely in response to widespread public unhappiness over the measure, which would enable authorities to send some suspects to stand trial in mainland courts. (AP Photo/Kin Cheung)

Sunday's march looked likely to match in scale one a week earlier that brought as many as 1 million out to express their concern over the former British colony's relations with mainland China.

The rally drew marchers both young and old.Farther down the parade route, mourners lined up to pay their respects at a makeshift memorial for a man who fell to his death Saturday after hanging a protest banner that read in part, "Make Love, No Shoot" and "No Extradition to China."

The man slipped from the grasp of rescuers after clinging for a time to scaffolding outside a shopping mall.

He missed a big cushion set up to capture him, and was declared dead at a nearby hospital.

"As a person born and raised in Hong Kong, I'm heartbroken when I see Hong Kong become like this."

Pro-democracy activists were calling for a general strike on Monday despite Lam's decision to suspend work on the legislation.

Some labor unions, teachers associations and other groups were planning boycotts of work and classes.

"We encourage all the public to carry on the campaign," said Bonny Leung and other leaders of the pro-democracy Civil Human Rights Front.

Many opponents of the extradition legislation are urging Lam to step down and want her to drop the legislation, which many fear would undermine freedoms enjoyed by this former British colony but not elsewhere in China.

"China just wants to turn Hong Kong into another Chinese city," said Alex To, 54, who said he runs a small business.

"Carrie Lam is just a figurehead. Everything depends on the attitudes of the leaders in Beijing."

After Lam announced she was suspending the legislation for the sake of avoiding more violence, Chinese government officials issued multiple statements backing that decision.

Lam's move appears to have failed to extricate her from Hong Kong's toughest political test since the Communist Party-ruled mainland took control in 1997 with a promise not to interfere with the city's civil liberties and courts.

Demonstrations on Wednesday turned violent, with dozens injured as police fought back with tear gas, rubber bullets and other forceful measures.

Lam has said the extradition legislation is needed if Hong Kong to uphold justice, meet its international obligations and not become a magnet for fugitives.

The proposed bill would expand the scope of criminal suspect transfers to include Taiwan, Macau and mainland China.

China has been excluded from Hong Kong's extradition agreements because of concerns over its judicial independence and human rights record.

Lam has sidestepped questions over whether she should quit and said she still plans to seek passage of the proposed amendment.

She also defended how the police dealt with the clashes with demonstrators. But she said she was suspending the bill indefinitely.

It was time, she said, "for responsible government to restore as quickly as possible this calmness in society."

"I want to stress that the government is adopting an open mind," she said. "We have no intention to set a deadline for this work."

Many here believe Hong Kong's legal autonomy has been significantly diminished despite Beijing's insistence that it is still honoring its promises, dubbed "one country, two systems."

Prosecutions of activists, detentions without trial of five Hong Kong book publishers and the illegal seizure in Hong Kong by mainland agents of at least one mainland businessman are among moves in recent years that have unnerved many in the city of 7 million.