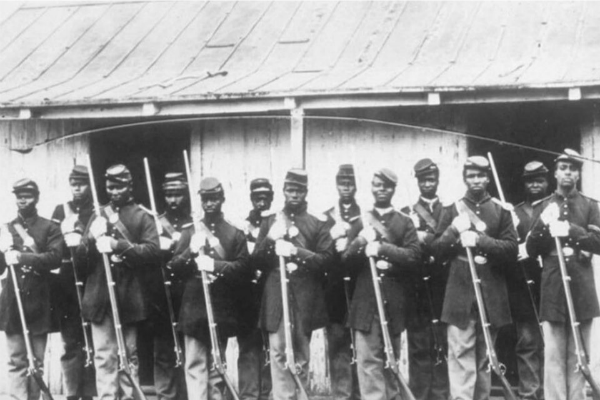 The Buffalo Soldiers National Museum has a reason to celebrate. A century and a half ago Black soldiers called “Buffalo Soldiers” first served in the American military.

Beginning Monday, July 25 through Saturday, July 30, the museum will be the site of activities celebrating the 150th anniversary of the Buffalo Soldiers, as part of the 9th and 10th (Horse) Cavalry Association Annual Reunion.

In addition, the Houston museum has been chosen as national headquarters of the association, the umbrella organization of more than 40 Buffalo Soldiers’ chapters across the country.

Founded in 2001 by Captain Paul J. Matthews, an Army Vietnam veteran and African American military historian, the museum is dedicated to preserving the legacy of Buffalo Soldiers. The exhibits cover seven wars, along with women in the military, chaplains in the military and astronauts.

For more than 35 years, Matthews has collected military artifacts and has the largest collection of African-American military memorabilia in the world. The museum offers programs and projects that reach out to community members of all ages.

“In 1866, the U.S. Army reorganized and established the first peacetime Army,” he said. “As a part of the reorganization they created six Black units. This July 28 will be the 150th anniversary of the formation of those segregated units. We’re very excited about that. We will have our headquarters at the Houston Marriott Westchase Hotel and related activities at the museum.”

In a one-on-one interview, Matthews discussed the reunion celebration, the museum and the Buffalo Soldiers, brave African-American men who served in a variety of posts in the 1800s.

Houston Defender: What sparked your interest in the Buffalo Soldiers?

Captain Paul J. Matthews: While I was an ROTC cadet at Prairie View A&M University I read two paragraphs in a military book about the Buffalo Soldiers and became intrigued by the Black men in blue uniforms…it was a story that needed to be told.

HD: Why is it important for African-Americans to learn about the Buffalo Soldiers and Blacks in the military?

CPM: I take them back to Frederick Douglass who said at the start of the Civil War, “Give the colored man a uniform, a buckle with the U.S. on it, a button with the eagle on it and a musket and you’ll make him a citizen but you’ll also make him a man.” He wanted to make sure the Civil War was being fought for freedom and not just to save the Union.

The same thing occurred in World War I. W.E.B. DuBois said, “Put aside your differences, go overseas, come back and be first-class citizens.” The military has always been a very important component of the Black community. When I was growing up in La Marque, Texas, and we would go to church, World War II soldiers would come in and people would stand up. In the ‘60s when you graduated from high school it was either the Army or college. That’s the way it was. The military, other than the Vietnam era, was always extremely popular in the Black community.

HD: How would you describe the museum’s success?

CPM: We started out in my garage and on January 5, 2001 we moved to a building on Southmore Blvd. In November of 2012 we moved to a 35,000 square foot historic building that goes back to 1925. That’s a tribute to the board of directors, volunteers and troopers who helped us become who we are. We are the mothership of Buffalo Soldier museums. I don’t know of any other military museum that can compare to us and what we do.

HD: What are some of the activities planned for the celebration?

CPM: One of the highlights will be a parade that’s going to start at Emancipation Park and end up at the museum [located at 3816 Caroline]. We have 150 riders on horses that are going to come in. One group is coming from New Orleans, where the 9th Cavalry was formed. The other group is coming from Fort Leavenworth, Kansas, where the 10th Cavalry was formed.

Events include a ceremonial ride-in on that Thursday, a session on the history of the Buffalo Soldiers on Friday, and a parade on Saturday. We are expecting over 2,000 people from all over the U.S. The Houston chapter is the host chapter along with the museum and I am the national chair for the reunion.