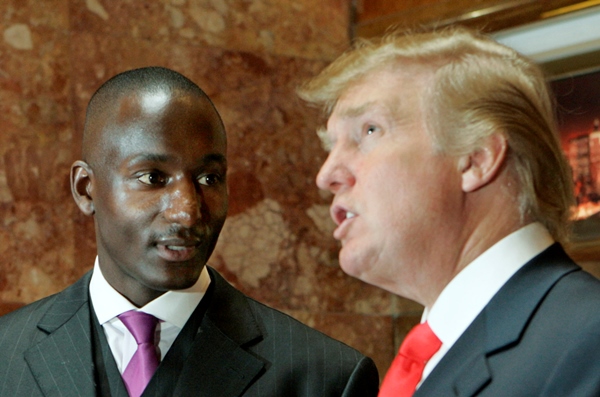 Dr. Randal Pinkett has established himself as an entrepreneur, speaker, author and scholar, and as a leading voice for his generation in business and technology. He is the founder, chairman and CEO of his fifth venture, BCT Partners, a multimillion-dollar management consulting and information technology solutions firm headquartered in Newark, NJ.

Dr. Pinkett has received numerous awards for business and technology excellence including the Information Technology Senior Management Forum’s Beacon Award, the National Society of Black Engineers’ Entrepreneur of the Year Award, and the National Urban League’s Business Excellence Award. He has been featured on nationally televised programs such as The Today Show, Live with Kelly and Michael, Nightline and CNN. In 2009, he was named to New Jersey Governor Jon Corzine’s official shortlist as a potential running mate for Lieutenant Governor of New Jersey.

Dr. Pinkett is the author of Campus CEO: The Student Entrepreneur’s Guide to Launching a Multimillion-Dollar Business and No-Money Down CEO: How to Start Your Dream Business with Little or No Cash and co-author of Black Faces in White Places: 10 Game-Changing Strategies to Achieve Success and Find Greatness, which was named one of the Best Black Nonfiction Books of 2010 by the Los Angeles Sentinel.

He holds five degrees including: a B.S. in Electrical Engineering from Rutgers University, where he competed as a high jumper, long jumper and captain of the men’s track and field team; a M.S. in Computer Science from the University of Oxford in England; and a M.S. in Electrical Engineering, MBA, and Ph.D. from MIT. Most notably, he was the first and only African American to receive the prestigious Rhodes Scholarship at Rutgers University and was the first, African American winner of Donald Trump's reality television show, “The Apprentice.”

Born in Philadelphia and raised in New Jersey, Dr. Pinkett is a proud member of Alpha Phi Alpha Fraternity, and attends First Baptist Church in Somerset, NJ, where he resides. He is happily married to his wife, Zahara, and they are the proud parents of their daughter and two sons. Dr. Pinkett firmly believes that “for those to whom much is given, much is expected,” so throughout his endeavors, he places great emphasis on his desire to give back to the community.

Recently, Dr. Pinkett and several other “Apprentice” alumni held a press conference to voice their opposition to Donald Trump's candidacy. Here, Randal explains why he feels Mr. Trump is unfit to be President.

Kam Williams: Hi Randal, thanks for the time. How you been, bro?

RP: Everybody's well, my friend. Thanks for asking. How're things on your end?

KW: Very well, and I have to thank you again for taking the time to mentor my son and a few of his classmates when they were in college.

KW: Let's get down to business. Five years ago, Donald Trump pointed at his picking you as the winner of “The Apprentice” as proof that he's "the least racist person there is." What does it mean that you are now saying he's unfit to be president?

RP: I find his use of me as his defense against allegations of racism as not only absurd but as also misguided. Consider the history of our relationship, particularly my finale on “The Apprentice,” when I expressed concerns then -- and maybe my opinion now -- that his decision to ask me to share the title was either racially insensitive or just straight racist. To display that behavior toward me, the only person of color he'd ever hired on the show, and to then say I'm the evidence that you're not racist means that your privilege has so sufficiently blinded you that you don't see the insidiousness of what you did then or of what you're saying now.

KW: How do you feel about his reaction to the six of you, calling you "failing wannabes?"

RP: [Laughs heartily] His reaction was un-presidential, petulant and sophomoric.

KW: What do you think of the prominent Black people in his corner, like Dr. Ben Carson, Omarosa and his national spokesperson, Katrina Pierson. Have you spoken to any of them?

RP: No, I haven't had direct contact with any of them, although I've known Omarosa for years and I would consider her a friend. I saw her on MSNBC the day of our press conference, attempting to defend Donald. As she suggested, sometimes members of the same family simply have to agree to disagree, and we disagree as it relates to Donald. It is certainly the case that Omarosa has her position and her agenda, and she and Donald have developed a mutually beneficial relationship in terms of business and media exposure. That's her guy. She knows where I stand. I've been very clear and very transparent that I see things differently.

KW: What always bothered me the most about Donald Trump was how, during the Central Park Jogger case, he took out full-page ads in all of the New York daily newspapers calling for the return of the death penalty. That helped create an atmosphere in which there was rush to justice and five innocent teenagers were convicted of the crime. And when they were finally exonerated years later, Trump never apologized or offered any jobs or money to help them readjust to society.

RP: I echo your sentiments. Not everyone is familiar with -- let alone intimately familiar with -- the Central Park Five and the atmosphere that was created around that entire case. I have made repeated references to his behavior -- regarding the Central Park Five, housing discrimination cases that were brought against him and firsthand reports I received during my year working there in terms of the lack of diversity at the executive and decision-making levels within the organization. There were even people who expressed their dissatisfaction with how they had been treated during their tenure within the Trump organization.

To people who keep wanting to dance around the question of whether he's racist, sexist or xenophobic, let me suggest that he has a pattern of this kind of behavior. And when you have a pattern, you have to call a spade a spade. I agree that Donald's behavior regarding the Central Park Five was deplorable. Reprehensible! There's culpability on his hands in terms of the way those young men were treated. And in accordance with his playbook, he does not back down or apologize. Instead, he doubles down. And that, to me, is one of the reasons why he's dangerous as a potential president. That is not the behavior you want in a world leader.

KW: What do you think of his having spearheaded the Birther Movement, suggesting that President Obama wasn't born in Hawaii?

RP: There's a common thread there which reflects a conscious or unconscious bias that drives his behavior. He will aggressively, vehemently or neglectfully go after a person of color, whether it's his apprentice, guilty until proven innocent offenders -- or the President of the United States. He does not exhibit the same behavior with non-minorities. To summarize, I think he's dangerous for the country. I think he's dangerous for the world.

KW: Well, thanks again for the interview, Randal.

RP: Always good to connect with you, Kam.