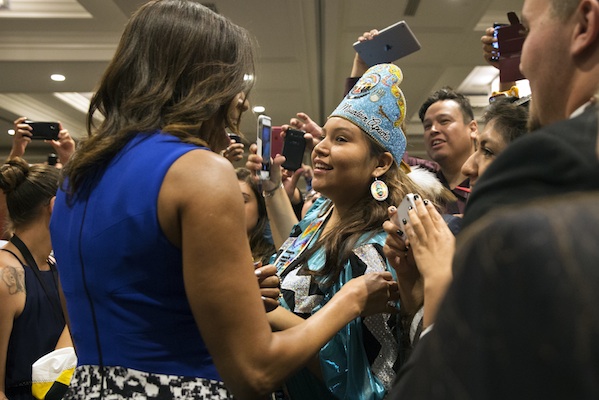 WASHINGTON (AP) — Michelle Obama on Thursday told hundreds of Native American youths that they are all precious and sacred and that "each of you was put on this earth for a reason."

"Each of you has something that you're destined to do, whether that's raising a beautiful family, whether that's succeeding in a profession or leading your community into a better future," the first lady said in a sometimes emotional address at a first-time summit called by the White House. "You all have a role to play and we need you."

The event was part of Generation Indigenous, or Gen-I, a White House initiative that grew from President Barack Obama and Mrs. Obama's visit last year to the Standing Rock Sioux Reservation, which straddles the border between North Dakota and South Dakota. Meetings followed, Cabinet members held listening tours, tribal youth were chosen as ambassadors and a national network was formed.

The goal is to remove barriers that keep young people from reaching their potential. 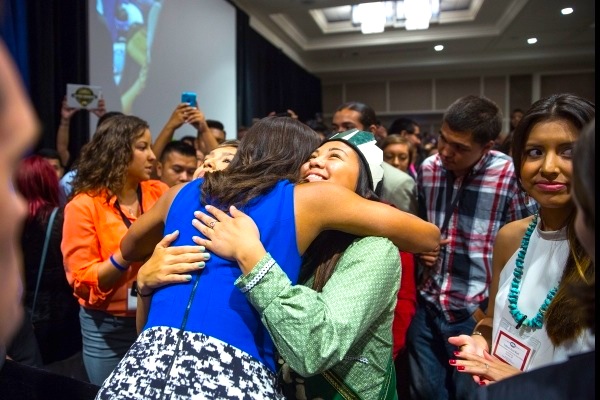 Teenagers at the summit represented 230 tribes and 42 states. Discussions focused on economic opportunity, education and cultural and other issues.

From New Mexico's pueblos to Midwest reservations, nearly one-third of American Indian youths live in poverty, according to federal statistics. They have the highest suicide rates of any ethnicity in the U.S., as well as the lowest high school graduation rates.

Mrs. Obama recalled hearing "heart-wrenching stories" of substance abuse and other crises during last year's visit but said the storytellers were looking to the future, not giving up.

She urged the young people to "draw strength" from knowing that their customs, values and discoveries are "at the heart of the American story" and have shaped U.S. history for centuries.

She also counseled the young people to connect with and "be inspired by each other," and to find out what issues others are working on and to take ideas home with them.

"Run for office. Local office, state office, even president of the United States," Mrs. Obama said. "I know you all have it in you."

Participants came up with ideas to address problems in their communities. Miguel Wambli, 16, of Rapid City, South Dakota, and a member of the Oglala Sioux Tribe, created a newspaper to feature writing by Native American students.

Seven suicides by teenagers in recent months have shaken the Pine Ridge Reservation in South Dakota, and close to 1,000 suicide attempts were recorded on the reservation over nearly 10 years. Some students have projects aimed at raising awareness, while Wambli believes a newspaper would give teenagers an outlet.

"I want to try just to help them find their voice and be able to express themselves and be knowledgeable about what's going on in their community," he said.