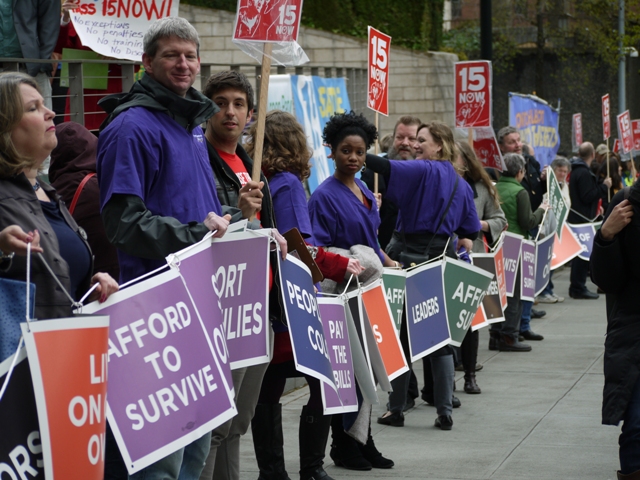 WASHINGTON (NNPA) – Raising the minimum wage to $10.10 would likely save taxpayers $39 billion in spending on safety net programs per year, according to a new issue brief by the Economic Policy Institute.

Researchers at EPI, a Washington, D.C.-based think tank focused on the needs of low- and middle-income families, also found that “more than 1.7 million American workers would no longer rely on public assistance programs,” if the minimum wage were increased.

David Cooper, an economic analyst for EPI and the Economic Analysis and Research Network (EARN), said that the value of today’s federal minimum wage of $7.25 lost nearly 25 percent of its worth since the 1960s.

Raising the minimum wage would help to close the income gap between Blacks and Whites, because black workers hold a disproportionate amount of the low-wage jobs in the labor market.

A report published in EPI’s “Unfinished March” series, a collection of reports that revisited the goals set during the 1963 March on Washington for Jobs and Freedom, found that if lawmakers had established the  $2.00 minimum wage that the marchers asked for, “today it would be worth $13.39—a far cry from today’s $7.25.”

According to the report, “roughly 45 percent of workers likely to get a raise from an increase in the minimum wage to $10.10 receive benefits from at least one means-tested public assistance program, either directly or through a family member.”

Cooper said that most of those programs were meant to be temporary support for people that had fallen on hard times or suffered some unexpected change in their income.

“They were not intended to act as long-term subsidies to employers so that businesses could get away with paying poverty-level wages,” Cooper explained. “But today roughly half of public assistance dollars for these programs go to working families and roughly half of the workers in those families that receive benefits are working full-time.”

In 2014, Dēmos, a public policy group aimed at reducing political and economic inequality, reported that, “the compensation of fast food CEOs was more than 1,200 times the earnings of the average fast food worker,” in 2012.

“Accommodation and Food Services [CEOs] earned 543 times the annual income of the average worker in the sector – the highest CEO-to-worker ratio of any sector in the economy in any year since 2000,” stated the Dēmos report.

Dēmos also reported that the food preparation and retail jobs are among the top five occupations expected to grow through 2022.

“The increasing reliance on employment in these highly unequal industries will make it harder for working people to share in the gains of economic growth as more and more income becomes concentrated at the top,” the Dēmos report said.

A 2013 report by The Committee for Better Banks, a group that advocates for bank workers’ rights, said that bank worker wages are so low that roughly one-third of tellers or their family members “receive some sort of public assistance nationwide.”

The CBB report said that state and federal governments subsidize the low-wages that tellers earn to the tune of $900 million, annually just to help them make ends meet.

In a 2014 article posted to AmericanBanker.com, Brigid Flaherty of CBB said that Jamie Dimon, the CEO of JPMorgan Chase, raked in about $19 million in 2013 and that it would take Dimon about two hours to make what a JPMorgan Chase teller earns in a year.

And while bank CEOs were earning unheralded salaries and paying Wal-Mart wages to bank tellers, some of their managers were engaging in discriminatory hiring and employee practices.

In 2013, the United States Department of Labor said that Bank of America had to compensate 1,100 Black job applicants for discrimination they suffered from 1993-2005. That judgment came on the heels of $160 million settlement against Merrill Lynch for a 2005 class action lawsuit filed by Black brokers that worked at Merrill before the two merged in January 2009.

Cooper said that the public should not continue to subsidize low-wage employers who arguably haven’t been doing their fair share of the social contract: the understanding, in American society, that if you work hard you should be paid enough to make ends meet.

Cooper added: “Raising the minimum wage is a simple and long overdue step towards rebalancing the social contract so that the private and public sectors are more equal partners in improving living standards for American families.”