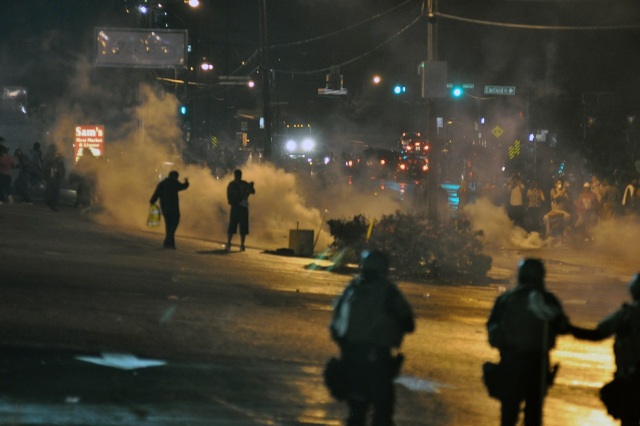 WASHINGTON (NNPA) – In an effort to combat police brutality in the Black community, the National Bar Association recently announced plans to file open records requests in 25 cities to study allegations of police misconduct.

Pamela Meanes, president of the Black lawyers and judges group, said that the Association was already making plans for a nationwide campaign to fight police brutality when Michael Brown, an unarmed Black teenager was shot and killed by Darren Wilson, a White police officer following a controversial midday confrontation in a Ferguson, Mo.

Meanes called police brutality the new civil rights issue of this era, an issue that disproportionately impacts the Black community.

“If we don’t see this issue and if we don’t at the National Bar Association do the legal things that are necessary to bring this issue to the forefront, then we are not carrying out our mission, which is to protect the civil and political entities of all,” said Meanes.

The NBA, which describes itself as “the nation’s oldest and largest national network of predominantly African-American attorneys and judges,” selected the 25 cities based on their African American populations and reported incidents of police brutality.

In a press release about the open records requests, the group said it will not only seek information about “the number of individuals who have been killed, racially profiled, wrongfully arrested and/or injured while pursued or in police custody, but also comprehensive data from crime scenes, including “video and photographic evidence related to any alleged and/or proven misconduct by current or former employees,” as well background information on officers involved in the incidents.

Not only will the NBA present their findings to the public, but the group also plans to compile its research and forward the data over to the attorney general’s office.

Meanes said that the group’s ultimate goal is to have a conversation with Attorney General Eric Holder and to ask him, and in some cases, demand that he seize police departments or take over some investigations that are going on in states or run concurrent investigations.

Meanes said that federal law prohibits the Justice Department from going into a police department unless a pattern or history of abuse has been identified.

“The problem is that the information needed for that action is not readily available in a comprehensive way on a consistent basis with the goal of eradicating that abuse,” said Meanes, adding that the open records requests is the best way to get that information.

Meanes said that the NBA was concerned that the trust was already broken between the police force and the residents of Ferguson and that the rebellion and the protests would continue.

Phillip Agnew, executive director of the Dream Defenders, a civil rights group established by young people of color in the aftermath of the shooting death of Trayvon Martin, an unarmed Black teenager in Sanford, Fla., said that law enforcement officials taunted, antagonized and disrespected peaceful protesters who took to the streets of Ferguson and at times incited the violence that they attempted to stamp out in the wake of the shooting death of Michael Brown.

“An occupying force came into the community, they killed someone from the community, and instead of being transparent and doing everything they could do to make sure the community felt whole again, they brought in more police to suppress folks who were exercising their constitutional rights,” said Agnew.“If your protocol results in greater violence, greater anger, and greater disenchantment of the people, you have to chart a different course.”

On the heels of the NBA announcement, Attorney General Eric Holder launched two initiatives designed to calm anxiety and frustration expressed by Ferguson’s Black residents towards the local police department over allegations of misconduct, harassment and discrimination. The Justice Department also introduced a “Collaborative Reform Initiative” to tackle similar concerns with the St. Louis County Police Department and to improve the relationship between police officers and the communities they serve.

During a recent press conference to announce the new initiatives in Missouri, Attorney General Eric Holder said that the Department of Justice is working across the nation to ensure that the criminal justice system is fair, constitutional and free of bias.

The interventions in Missouri are an important part of that commitment,” said Holder. “While there is much work left to do, we feel confident that there are solutions to any issues we find and that community trust in law enforcement can be restored and maintained. Ferguson and St. Louis County are not the first places that we have become engaged to ensure fair and equitable policing and they will not be the last. The Department of Justice will continue to work tirelessly to ensure that the Constitution has meaning for all communities.”

The new programs will work separately from the Justice Department’s criminal investigation into the Brown’s shooting death.

Although Ferguson city officials were widely criticized for the lack of diversity of their police department, a St. Louis Post-Dispatch study revealed that only one town out of 31 St. Louis County municipalities where Blacks accounted for at least 10 percent of the population, had an equal or greater share of Black police officers.

“While areas patrolled by St. Louis County Police are about 25 percent black, 10 percent of the county police force is black,” the Post-Dispatch reported.

As the NBA applauded the Justice Department’s latest efforts to protect the civil rights of American citizens, the also urged the attorney general to commit to investigations in the same cities where they are filing open records requests.

According to the NBA, Dallas tops the list for police misconduct in the South and more than 60 unarmed Black men have been killed by the Dallas Police Department, since 2001.

Agnew said that the days where police officers are able to kill people with reckless abandon are over.

Meanes said that the NBA will plans to train community stakeholders and local lawyers to effectively try police brutality cases without damaging the evidence and without becoming witnesses themselves and is also educating citizens about what to do when they are stopped by police.

“This is not a war on police officers,” said Meanes. “This is a war on brutality and in any kind of system where people are paid to protect, we ought to be advocating for that protection.”