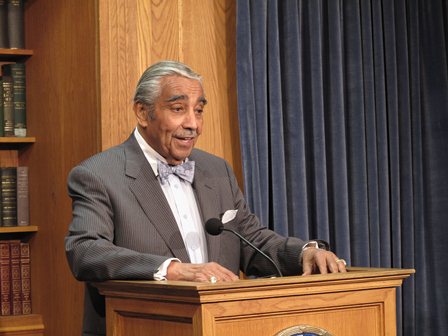 (CNN) -- As President Barack Obama finalizes his cabinet picks heading into his second term, some are pointing to a noted lack of diversity among the select group.

And Democratic Rep. Charlie Rangel says "it's embarrassing as hell." The congressman from New York pulled no punches Thursday when he chided the White House for not picking more women and minorities for the top level positions.

"The questions I've heard are fair," he said on MSNBC. "The record does speak for itself."

Obama will nominate Jack Lew, his chief of staff, for Treasury Secretary on Thursday, and CNN has learned the likely contenders for his replacement at the White House are all men. This comes days after the president nominated former Sen. Chuck Hagel for Defense Secretary, Sen. John Kerry for Secretary of State, and John Brennan, chief homeland security and counterterrorism adviser, to lead the CIA.

In making his point, Rangel cited another high-profile political name who took heat over questions about women's rights.

"We've been through all this with Mitt Romney, and we were very hard on Mitt Romney with his 'women binder' and a variety of things," Rangel said.

His comment referred to a presidential debate when Romney attempted to prove his support for gender equality by talking about how, as a former CEO, he tried to boost his workforce with more women.

"I went to a number of women's groups and said, 'Can you help us find folks,' and they brought us whole binders full of women'," Romney said at the debate. His comment was quickly turned into a social media punch line.

Talking about what's shaping up to be the next Obama administration, Rangel said Thursday "there's no excuse" now that the president has been in office for a while.

U.S. Ambassador to the U.N. Susan Rice was a top contender to replace Clinton at the State Department, but she withdrew her name from consideration last month.

The administration also says that more than half of the White House staff is made up of women, many in key senior leadership roles.

But Rangel added when "women and minorities don't get a chance to rub elbows," then people at the top have a harder time getting to know them and their experiences.