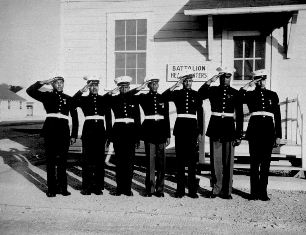 He rushes to stand when a visitor enters his family room; his ancient but smooth and nimble hands quickly reach to tie his necktie. His handshake is strong and firm.

At 102, Washington laughs loudly and speaks with a clear and robust voice about his years as one of the nation's first black Marines.

``I wanted to be a Marine because it was impossible to do -- because they would not accept me as a black man,'' said the Cheltenham resident, who lives with Carrissima, his wife of nearly 70 years.

He enlisted in the United States Marine Corps in 1942, shortly after President Franklin Roosevelt created the Fair Employment Practices Commission that forced the Marines to allow blacks to serve. From its inception until that order, the Marine Corps refused to recruit blacks, Native Americans or other minorities.

On Saturday, Washington was awarded the Congressional Gold Medal for his service with the Montford Point Marines. He is the oldest living member of the segregated group of some 20,000 black men who became the first to serve in the Marines.

Unable to make the trip to Washington D.C., 12 Marines in full dress uniform arrived at Washington's door for the historic event.

``It was the most god-forsaken, rat-infested, snake-infested, anti-human being place in the world,'' said Washington. ``It made us very special Marines.''

Washington never left that hellish place. The Marines' first black recruits were forced to receive their basic training there because, Washington said, the governor of South Carolina refused to allow them to come to Parris Island.

The governor was harshly reprimanded after the war by President Harry S. Truman, recalled Washington.

As a photographer with the military police, Washington's job was to take Marines' pictures for their identification cards.

``I missed many movies, many furloughs, many days off,'' Washington said, as he performed his duties, graduating basic training at the top of his class.

``When I asked why we couldn't get out of North Carolina, I was told we were needed where we were and not to ask again ... some of those DIs (drill instructors) were dogs, dogs.''

On the night he and his fellow Marines were celebrating their graduation from basic training, Washington remembered an encounter with one of his white instructors.

``Later, I thought maybe I shouldn't have done that ... but I could feel my mother and that's what she would have wanted me to do,'' Washington said with pride in his voice.

Washington served for about two and a half years, until World War II ended and the Montford Point Marines were honorably discharged.

He went on to graduate from Temple University, attend evening classes at Saint Joseph's University. He worked for the Philadelphia School District for 47 years and remains very active in with St. Luke's Episcopalian Church in Germantown.

Always the gentleman, Washington said he hopes he didn't appear to be bragging. ``I wasn't raised that way. My mother wouldn't like that.''