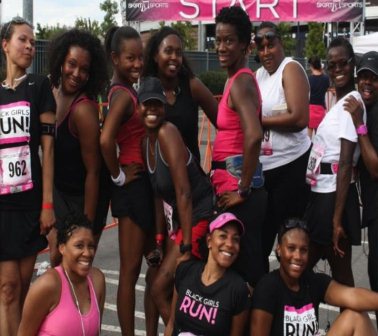 (CNN) -- African-American women are joining forces to battle the alarming rates of heart disease, high blood pressure and obesity that are affecting millions of Americans.

The movement is called Black Girls Run!, and it was formed to encourage women of color to get fit and live healthier lifestyles.

Toni Carey and Ashley Hicks are the creators of Black Girls Run! They wanted to drop some pounds and get in shape, but they soon saw their personal goals turning into a nationwide movement.

"I had no idea that Black Girls Run! was going to grow to be this size," Hicks said. "Toni and I feel really blessed and excited that we are able to help so many people."

Growing in size may be an understatement. Thanks to social media and word of mouth, Black Girls Run! now has 60 groups across the country.

The group's Facebook page and Twitter updates allow over 25,000 members to share their 'runavations' while inspiring others to overcome whatever obstacles they may have in order to exercise.

Before joining Black Girls Run!, Shahidah Hamlett of Washington lost 30 pounds using a combination of boot camp-style training, boxing and running. After seeing how women were keeping tabs on their mileage by posting their goals on BGR's Facebook page, she decided to jump in and join them.

"It encouraged me to attend standing runs and increase my mileage per week," said Hamlett. "I decided if I am doing this amount of miles I might as well train for a half marathon." In March, Hamlett saw her efforts pay off when she successfully completed the DC Rock n' Roll' Half Marathon.

The leaders of each chapter of BGR work diligently to register members for nearby races, hand out information about training plans, and offer guidance on where to find the best running gear.

BGR's ambassadors run the gamut. Everyone from seasoned ultra marathoners to people who are lacing up running shoes for the first time. The ambassadors exude enthusiasm for the ladies and their running journeys.

Meg Guilford, the BGR D.C. ambassador, is a former javelin thrower for Penn State's track and field team. Athletics has always been a huge part of her life, but Guilford's active lifestyle came to a halt two years ago when she experienced a massive multiple sclerosis attack that left her in a wheelchair for three months.

After spending the summer in a rehabilitation hospital, Guilford gradually went from the use of a wheelchair to a walker and then to a cane. Guilford says she is optimistic about her recovery. "I'm better than I was, but I think with the help of Black Girls Run! I can be better than I am," she said.

Ebony Adams was another newbie to Black Girls Run! The mother of two admits she didn't have much of a fitness routine. "Living in Washington, D.C., I would drive around and see people outside running," she said, "I would say 'that's not me, I can't do it.' In fact, I thought I was allergic to running."

A year later, Adams is a bona fide runner and can easily crank out 5 kilometers. "Running makes me feel empowered," Adams said.

Juanne Harris, a native New Yorker and active runner, says, "it's life-changing to see what it does for the women in the group. When someone comes to you and says, I can't believe I'm running, I'm asthmatic, or I lost 20 pounds and I've met my goal weight, it's inspiring."