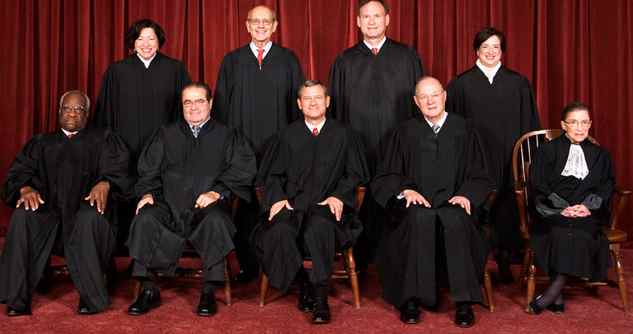 His most sweeping domestic achievement could be struck down if they stand together with Justice Clarence Thomas, another GOP appointee who is the likeliest vote against.

But the good news for Obama is that he probably needs only one of the four to side with him to win approval of the law's crucial centerpiece, the requirement that almost everyone in this country has insurance or pays a penalty.

Lawyers with opposing views of the issue uniformly agree that the four Democratic-appointed justices, including Obama's two picks, Elena Kagan and Sonia Sotomayor, will have no trouble concluding that Congress did not overstep its authority in adopting the insurance requirement that is aimed at sharply reducing the now 50 million people without insurance.

On the other side, Thomas has made clear in several cases that he does not take an expansive view of Congress' powers.

Both the Obama administration and the health care law's challengers believe they can attract the other four Republicans to their side. The group includes Chief Justice John Roberts and Justice Samuel Alito, the two appointees of President George W. Bush who have swung the court to the right in a number of areas; conservative stalwart Antonin Scalia; and the less doctrinaire Anthony Kennedy.

There is no consensus in the legal and academic worlds which way the court will go or even how each of those four justices will vote.

But a legal challenge, once seen as improbable at best, now has everyone's attention, partly because the justices find it weighty enough to devote six hours over three days to hearing the case. That's the most time for any issue in more than 45 years.

"Arguments that once seemed outlandish don't seem quite so outlandish anymore," said University of Michigan law professor Nicholas Bagley, a health law expert who says the law should be upheld.

The fight over the law has played out in starkly partisan terms. It passed Congress without a Republican vote. All the GOP presidential candidates have called for its repeal.

Some supporters of the law worry about the high court's decision because a similar partisan split, with a few important exceptions, has emerged in the lower courts.

"I think as a constitutional matter, this should be an easy case," said Erwin Chemerinsky, a liberal scholar and dean of the law school at the University of California at Riverside. "But every judge appointed by a Republican president, with two exceptions, has voted to strike the law down. And every judge appointed by a Democratic president, with one exception, has voted to uphold the law. Thus, the real issue is whether the Republican-appointed justices will overcome ideology and vote to uphold the law."

Among lawyers who appear regularly before the Supreme Court, Carter Phillips of Sidley Austin LLP offered a fairly typical response in predicting the court is more likely to uphold the law than strike it down. But he was far from certain.

"I have no doubt that if the court strikes down the statute, it will be 5-4," Phillips said. "But if the court upholds the statute, it would not shock me if the decision turned out not to be 5-4. I would be somewhat surprised if Justices Thomas and Scalia both did not vote to strike down the law, but I certainly believe that Justice Alito and the chief" could vote to sustain it.

In the view of Phillips and other lawyers, Kennedy is the most likely Republican to vote in favor of the law. He often provides the decisive vote in cases that divide the court by ideology.

But his record in cases involving Congress' constitutional power to regulate commerce offers both sides some hope. Kennedy was part of the majority that struck down a federal law prohibiting people from carrying guns in or near schools. That 1995 ruling was the first time since the New Deal that the court limited Congress' power under the Commerce Clause.

The 26 states and private parties challenging the health care law peppered their briefs with references to Kennedy's writing in the guns case and another decision, from 2010, in which he took a narrower view than the majority of Congress' power to act in an area not spelled out in the Constitution. The court upheld Congress' authority to continue to hold inmates considered "sexually dangerous" even after they completed their prison terms.

At the same time, however, Kennedy said in a concurring opinion in the guns case that "Congress can regulate in the commercial sphere on the assumption that we have a single market and a unified purpose to build a stable national economy." The Obama administration says Kennedy could have been describing health care, which makes up 17 percent of the U.S. economy.

Roberts, on the other hand, joined the majority in the 2010 sex offenders case that broadly endorsed federal power.

As chief justice, Roberts also might feel he has an obligation to try to avoid being in the dissent in a case of such importance.

Ilya Shapiro, a lawyer at the libertarian Cato Institute who opposes the health care law, said that Roberts "as the keeper of institutional integrity, wanting the court to speak with more of one voice" could join with Kennedy and the court's liberal wing, rather than being a dissenter in a 5-4 ruling upholding the law.

Like Roberts, Alito has not had many occasions to weigh in on congressional power. Like Kennedy, he took a narrower view of the 2010 case.

In some ways, Scalia's vote is the most intriguing. He has joined in a series of opinions endorsing limits on Congress' regulatory authority under the Commerce Clause.

Yet the administration is focusing on Scalia's opinion in Raich v. Gonzales, a 2005 case that upheld a federal law banning medical marijuana, even grown and consumed at home, as an appropriate regulation of interstate commerce.

"Congress may regulate even noneconomic local activity if that regulation is a necessary part of a more general economic regulation of interstate commerce," Scalia said in a separate opinion.

Georgetown law professor Randy Barnett, a driving force in the effort to take down the health care law, said he isn't worried about Scalia. "To distinguish his opinion in Raich from this case, Justice Scalia would not even have to break a sweat," Barnett wrote recently.

It's hard to imagine Scalia as the only conservative justice in favor of the law.

If he approved of the law, Scalia would more likely join a significant court majority to ratify it. Administration supporters hope that a larger majority including Scalia would make it harder for Republican politicians to make a partisan case against the law.