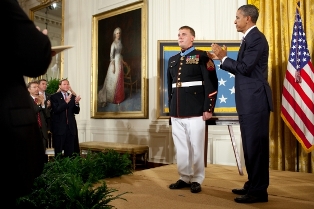 WASHINGTON (AP) — President Barack Obama on Thursday bestowed the highest U.S. military honor on Dakota Meyer, a young and humble Marine who defied orders and barreled straight into a ferocious "killing zone" in Afghanistan to save 36 lives at extraordinary risk to himself.

"You did your duty, above and beyond," Obama told Meyer after reciting his dramatic story. Though the corporal and a fellow Marine were going against orders — commanders considered their effort too dangerous — they were doing what they thought was right, Obama said.

The president placed the Medal of Honor ribbon around Meyer's neck, patted his back and shook his hand as the audience in the White House East Room applauded.

At age 21, Meyer charged through heavy insurgent gunfire on five death-defying trips in an armored Humvee to save 13 Marines and Army soldiers and an additional 23 Afghan troops pinned down by withering enemy fire.

Meyer killed at least eight insurgents despite suffering a shrapnel wound in his arm as he manned the gun turret of the Humvee and provided covering fire for the soldiers, according to the military.

He had been supporting a patrol on Sept. 8, 2009, into a village in the Ganjgal Valley on the day of the ambush.

Meyer and the other Americans had gone to the area to train Afghan military members when, suddenly, the village lights went out and gunfire erupted. About 50 Taliban insurgents on mountainsides and in the village ambushed the patrol.

As the forward team called for air support that wasn't coming, Meyer, a corporal at the time, begged his command to let him head into the incoming fire to help.

Four times he was denied his request before Meyer and another Marine, Staff Sgt. Juan Rodriguez-Chavez, jumped into the Humvee and headed into the fray. For his valor, Rodriguez-Chavez, a 34-year-old who hailed originally from Acuna, Mexico, would be awarded the Navy Cross.

"They told him he couldn't go in," said Dwight Meyer, Dakota Meyer's 81-year-old grandfather, a former Marine who served in the 1950s. "He told them, 'The hell I'm not,' and he went in. It's a one-in-a-million thing" that he survived.

Meyer and Rodriguez-Chavez began evacuating wounded Marines and American and Afghan soldiers to a safe point. Meyer made five trips into the kill zone, each time searching for the forward patrol with his Marine friends — including 1st Lt. Michael Johnson — whom Meyer had heard yelling on the radio for air support.

With Meyer and Rodriguez-Chavez ready to test fate a fifth time, a UH-60 helicopter arrived at last to provide overhead support. Troops aboard the chopper told Meyer they had spotted what appeared to be four bodies. Meyer knew those were his friends and he had to bring them out.

"Dakota, I know you've grappled with the grief of that day, that you said your efforts were somehow a failure because your teammates didn't come home," the president said. "But as your commander in chief and on behalf of everyone here today and all Americans, I want you to know it's quite the opposite."

Meyer and Obama chatted informally Wednesday evening, on a patio outside the Oval Office, over a beer.

In the ceremony, Obama praised Meyer's humility and work ethic, noting that he would not even take a call from the president during his shift at a construction job because he was working. He is now out of the Marines. So they two arranged to talk over his lunch hour. Obama jokingly kidded him with thanks for taking the call.