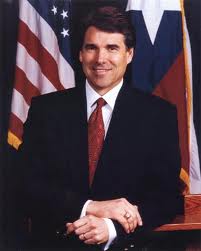 DES MOINES, Iowa (AP) -- Texas Gov. Rick Perry said Monday that he has the best economic record and executive experience in government of any rival in the Republican presidential field, contrasting his credentials with those of his top two opponents, Mitt Romney and Michele Bachmann.

"I respect all the other candidates in the field but there is no one that can stand toe-to-toe with us," Perry told The Associated Press in an interview at the start of his first full day campaigning in the leadoff caucus state of Iowa.

Perry also offered up his first policy proposal as a candidate, calling for a six-month moratorium on federal business regulations that he said were holding back job growth nationally. Perry brought the proposal forward just as President Barack Obama was traveling to the Midwest for a bus tour and speeches on the economy.

It was nothing short of an attempt by Perry to establish himself as the strongest Republican able to challenge Obama on jobs - and lay claim to Romney's mantel of jobs candidate.

Perry, the newest GOP candidate in the field, made the comments as the Republican race shifts into sharper focus.

Romney, the former Massachusetts governor who has emphasized his business experience, sits atop national polls. But he's now facing a double-barreled threat from Perry, Texas' longest-serving governor who formally entered the GOP race Saturday, and Bachmann, the Minnesota congresswoman who won a test vote of Iowans that same day.

In the interview, Perry never directly criticized the two even when given opportunities to comment on them directly. Rather, he promoted his own job-growth and gubernatorial records - and let the contrast speak for itself.

Romney is stressing more his decades in the business world as he seeks to be seen as the strongest candidate on the economy. He's been criticized by former Utah Gov. Jon Huntsman for Massachusetts ranking 47th in terms of job growth, while Utah ranked No. 1.

Perry sidestepped an opportunity to assail Romney, saying: "Trying to compare the job creation and the numbers of jobs with any other state is just not an apples to apples comparison."

But Perry also said that the more than 1 million jobs added to the rolls in Texas in his 10 years as governor make him the strongest choice for GOP voters on their top priority.

Perry also said Republicans were looking for a tested candidate, and that no other candidate had compiled the record of economic development or legislative success.

It was a reference to Bachmann.

She has faced criticism from rivals - including former Minnesota Gov. Tim Pawlenty, who dropped out of the race Sunday - who have accused her of having accomplished little in her three terms in the U.S. House compared with the record of a governor.

"It's a fair comparison," Perry said. "Understanding how that process works, but more importantly making that process work, of which we have done in Texas, is inarguably better than ... anyone who is aspiring to be the president."

Perry spent his first full day in Iowa at breakfast with Gov. Terry Branstad, a Republican, at the governor's mansion in Des Moines. He also was visiting the Iowa State Fair, and meeting privately with other Republican elected officials. He was planning to travel to Iowa City and Cedar Rapids, before holding a business roundtable in Dubuque Tuesday.

Branstad said it's clear Perry will compete hard in Iowa.

"He will compete," Branstad said, adding: "He's kind of an exciting new entry into the race, not to detract from the other candidates."