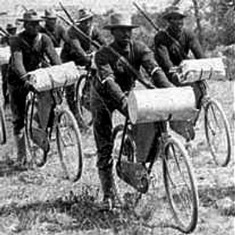 Of all the remarkable stories told about the U.S. Army's Black cavalries known as the Buffalo Soldiers, the most remarkable is surely that of the 25th Infantry Brigade Bicycle Corps.
Formed in the late 19th century to test a new military theory that bikes could be an invaluable tool in war, 19 soldiers rode cross-country from Fort Missoula in Montana to St. Louis, Mo., at the end of the 19th century.
"They were a specialized unit who were able to test the bicycle to see if they could be used in lieu of horses," says Pferron Doss, a former Black Studies professor at the University of Missoula.
"The bike never really took off as a military tool, but the energy that took off from the bike corps caught attention worldwide."
Improvements in bicycle construction in the 1890s prompted European and Australian armies to start putting their troops on bikes.
By 1896, the U.S. Army jumped on the bandwagon and tapped the Buffalo Soldiers to set up its bicycle corps in Missoula. Like all Black regiments, it was commanded by a White officer, Lt. James Moss.

The 25th infantry, known as the "Iron Riders," first tested its one-speed Spalding bikes, which were manufactured in Chicago, by going through Glacier and Yellowstone National Parks.
Each soldier carried a 10-pound blanket roll with a tent and supplies stuffed into a carrier on the handlebars; a 10-pound rifle with ammunition, and food in hard cases attached to the frame – all in all the bikes weighed some 60 pounds.
"Their roads were wagon trails, game trails and a whole lot of walking along the railroad tracks," Doss says. "And the weather was terrible."
The following year they beefed up the corps with more soldiers and set off on an epic 40-day, 1,902 mile bike trip.

Heroes Wrongly Accused
Nine months after completing the trip, the 25th Infantry was shipped out to the Spanish American War.
"But the bicycle itself, the trip, really unified the 25th Infantry as well as the Pacific Northwest because they were really appreciated as colored soldiers," Doss says.
On the battlefield in Cuba, the squad distinguished itself as one of the most valuable units, capturing the Spanish flag in the fight for El Caney in 1898 and winning the praise of Col. Teddy Roosevelt.
Eight years later, their glowing reputation was brutally destroyed.

"Unfortunately, 1906 in Brownsville, Texas, there was a White citizen that was shot, they blamed it on the 25th Infantry, and then President Roosevelt dishonorably discharged the whole lot of them," Doss said.

Roosevelt's move to fire the 167 soldiers effectively barred them from any future military or civil service jobs. An effort by Booker T. Washington to intervene ended in failure.
Years later historian John D. Weaver published a book-length investigation of the Brownsville Affair, as it had come to be known.
The book prompted a new review by the U.S. Army which found the soldiers innocent. President Richard M. Nixon pardoned them in 1972.

Recreating the Ride
Now a U.S. Forest Service employee in the Portland office, Doss has a unique understanding of the soldiers' story because he and nine others recreated their ride in 1974.
"The route that we took was as close as we could get based on the primary roads became secondary and tertiary roads and they ran adjacent to the railroad tracks so we were probably never more than 5, 10 miles off the original route," he said.
"We went across the United States, through the same major cities that they did on the same calendar dates."
Doss and fellow Black Studies Professor Richard Smith organized the ride, traveling afterward to Minneapolis where they interviewed the sole survivor of the 25th infantry, Dorsie Willis.
"It was a wonderful time that we had with him," Doss says. "He did not take the bicycle trip but his first sergeant Mingo Sanders did. So we got to hear the story about that as well as the Spanish American War."
Doss said he and the others took the odyssey because they wanted to honor the 25th Infantry – which had sacrificed so much only to be crushed by racism.
Also, though, the trip was a matter of principle.
"I belonged to the speakers bureau in the Black Studies Department and we used to go out around the state of Montana, and people would say, 'well you don't understand, there were never any coloreds here, so we don't know about new people.'
"And so when I found that original photograph of the bike corps outside Fort Missoula on their bicycles -- that ended up being about a three year research project.
"And we decided to take the trip in their honor as well as to show the contributions of African Americans."