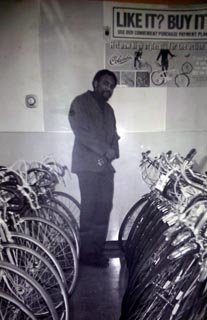 For more than a decade, starting back in the early 1970s, North Portland families in search of a good deal on bikes went to Charles Crews and his wife Dolores' shop off Lombard near Roosevelt High School.

Next door to the Dairy Queen and across the street from Fred Meyer, Chuck's St. John Cyclery was painted with a colorful mural of a bicycling crowd spinning past a landscape of snowy peaks and blue sky.

"Join the New Generation – Ride a Bicycle," the mural said.

"Our clientele was mixed – I mean we had African American, Hispanic, White – the whole gamut of people coming in to buy our bicycles," Dolores says.

"My dad was way before his time with this bike shop," said his son, Karanja Crews, a teacher at Vernon Elementary School.

Chuck Crews always dreamed of owning his own bike shop, Dolores said. The opportunity came when he met a man who already knew the business and who was willing to put in the time to show him the ropes.

"Chuck went to his house out in Washington for about a month and he taught him everything there was about bicycles – how to fix them from scratch, do the wheels, all types of stuff.

"So that was his dream, he just got in his head he wanted to start getting financing from the bank to open the shop."

Their four children – Uhuru, Karanja, Aaron and Angela – grew up in the bike shop. The girls on their bikes appeared in ads in the local community newspaper, and the boys raced motocross.

Does Dolores ever think back about the bike shop?

"Oh yes, all the time," she says. "I'm just amazed at how Portland has changed and all the bike lanes.

"See, and I think these crazy drivers not giving bikes the respect and I think – hey, those are bicycle riders and you know I have full respect for them cause I used to ride a bike."

On the debate about why Portland's bike culture is so White, Dolores has a few observations.

"In my experience African Americans used to use the bike for recreation, where other people, a lot of Caucasians use it for being green and not driving, that type of thing. We have more of a tendency to get into our cars, and go to the store," she says.

"Also cost factor is important – prices are astronomical now. Back in the day we made it more reasonable, that's why we sold more bicycles to families."

But in Oregon, the bike business rises and falls with the weather. Dolores says that although she and Chuck were able to buy their first building, the seasonal economics made it hard to raise their growing family on.

"Well because our family had expanded, it was more difficult to get financing, and to weather the months that it was really slow," she said.

So Chuck expanded into lawnmowers and chainsaws – which are also seasonal. In the end he and Dolores sold the shop and became painting and sandblasting contractors for the state and federal government.

Today, Dolores Jones talks fondly about Chuck, whom she eventually divorced before he passed away 11 years ago.

"He was a creative, innovative, and passionate man," Karanja said. "Imagine if the shop was still open today, it would be a historical landmark. Portlanders love supporting businesses with longevity."