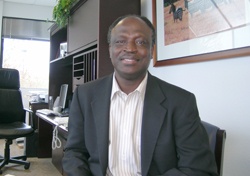 Matt Essieh immigrated to Oregon in 1980 to attend Southern Oregon State University. Now, the one-time immigrant is an American citizen with a company that employs 21 people and does business nationwide.

His Beaverton-based business, EAI Information Systems, creates computerized systems for banks, brokers and insurance companies to help clients make and keep track of their investments. But Essieh does a little investing of his own: He volunteers locally with nonprofit organizations to improve their programs, and he returns to Sampa, a Ghanian village of 11,000 people near Ivory Coast, to build dormitories, buy health care equipment and sponsor college students who want to attend colleges in the United States.

For Essieh, what goes around comes around.

"We have a national company; we have clients all over," he said. "Maybe this will inspire young people coming to America. If they're willing to face the obstacles, this country can be yours, too."

Being in business seems as natural to Essieh as breathing. When he was a child in Ghana, he operated his own farm and sold peanuts and corn to help pay his school tuition. While studying for a bachelor's degree in business in the early 1980s, Essieh became fascinated with computer science.

"In Africa, we didn't even know what a computer was," said the entrepreneur who also earned a master's degree in business. Following college, he became a controller's assistant at Washington Federal Bank and began learning how banks are operated. Later, he was chief financial officer of Westmark Inc., a third-party financial services firm serving the banking industry.

But Essieh always wanted to be his own boss. "I wanted to control my own destiny," he said. "I took my experience and started my own business."

In 1989 he opened EAI, and, although he had the business and education background, he nevertheless faced — and overcame — many problems.

As federal laws changed and banks were able to enter the investment business, Essieh saw a need for a system to organize the information banks collected. He started out small, with three systems developers. He attended trade shows and conferences, taking his laptop computer with him to demonstrate his product to potential clients. Gradually, his customers realized that Essieh's company could address his clients' problems and deliver a valuable product.

"There aren't many African American business owners out here," he noted, but he added, "When people see that you are hard-working and determined to do the right thing," he said, they want to work with you.

Essieh's clients come from almost every part of the country, he said, including the South and the Midwest. Many are companies with assets ranging from $1 billion to $1 trillion. His client list includes Dreyfus, Mellon, Hibernia, First Citizens Bank, Pershing and Fiserv Securities Inc.

Part of Essieh's determination to overcome obstacles and forge ahead began in his childhood where he constantly fought a pervasive attitude that "it can't be done." But, as the first student in his village to go to college, Essieh also grew up where he was loved and encouraged.

"It is a place where families live together and everybody takes care of everybody else," Essieh said. "No one feels superior to anybody. The community, the spirituality were very rich. When I am faced with challenges, I throw my mind back to my community. That's where I get my strength."

His greatest accomplishment, he said, was the ability to give back to his community — both in Ghana and in the Portland area.

A founding board member of Pinnacle Bank in Beaverton, Essieh also is board secretary for the World Affairs Council of Oregon, and he is on the board of the Harambee Centre, a Portland nonprofit organization that builds relationships between the Pacific Northwest and African communities.

Last June, the Harambee Cenre raised $37,000 to complete a girls' dormitory in Sampa. Essieh and his 17-year-old son spent a month there overseeing the construction of the dormitory, which will house 160 girls who would not otherwise have the opportunity to receive a high school education.

Essieh also brings Oregon university students to Sampa as teaching interns at the NafanaPresbyterian Secondary School for seven months. They teach math and science to the high school students and help with extra curricular programs, such as tree-planting, sports and school clubs. The students pay their own expenses, but housing is provided.

"Whatever this country gives me, it helps me contribute to my original country," said Essieh, who considers Oregon to be his home now.

"I'm an immigrant and I'm able to create a company in Oregon. My employees are native-born Oregonians and people from Korea or Vietnam. It's very mixed, but we all work here as a family. We try to create an atmosphere of respect for each other, no matter what country they originate from."

"That's the foundation of this country … . When you talk about the free market, the power is not with the politicians. It's about who can create employment so people can pay their mortgages. It's also about building healthy communities.

"The value goes way beyond employees and paying taxes; it means having the ability to contribute to your community."