By Brian Stimson of The Skanner News
Published: 03 September 2009 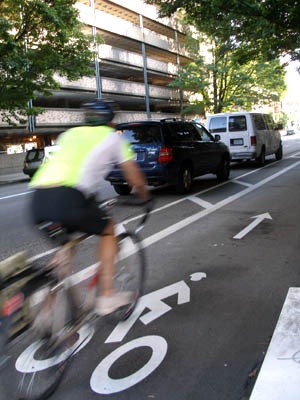 Wake Gregg's bike shop is a shining example of sustainable living. Although you wouldn't know it, the racks, the lighting, shelving units – even the coffee maker – were all purchased second hand.
And the products he sells – electric bicycles – are about the most efficient form of motorized transportation that exists. Although they look nearly identical to their non-motorized counterparts, the electric bikes at The E-Bike Store, located at the corner of Alberta Street and Vancouver Avenue, can take you longer and faster for a fraction of the effort.
"They're so much fun, you want to ride it," Gregg said.
Think of it like a regular bicycle with the built-in capacity of Lance Armstrong. With the aid of a small electric motor and a battery pack, an e-bike can either provide the sole power of a trip, or make peddling uphill a dream.
Here's how the average e-bike works: Electricity is provided by one or two battery packs, usually located – and locked -- next to the rear wheel; a 300 to 600 watt motor on the front wheel axle powers the bike; controls are located on the handle bars. With the exception of the small motor and battery packs, they look like any other bike on the road, they just won't go above 20 mph with battery power alone.
"If someone blows by you on a hill when you're giving all you got, you know its an electric bike," Gregg said.
Depending on the size of the battery, size of the motor and how a rider utilizes the motor, one charge -- which takes about 5 cents of electricity -- can take you anywhere from 12 to 30 miles. Gregg says batteries typically last about 18,000 miles before needing to be replaced.
The ease of the ride and cost effectiveness of an e-bike cause many older riders to visit Gregg's shop. Baby boomers are his biggest customers, he says, and many are looking for a way out of their car but are afraid of showing up to work too sweaty. Many other people have physical disabilities that don't allow them to ride a regular bike.
Gregg says he hopes the shop – located in the same building as public housing – can soon be a conduit for teaching young people how to fix and ride bikes, a task that harkens back to his original profession.
Gregg's obsession with bicycles, mechanics and teaching began when he was in middle school. The Seattle native took a class taught by Francis Call that changed his life.
Call not only lead afterschool survival classes and outdoor exploration trips, she taught extracurricular classes on mechanics.
Eventually, Gregg began working with at-risk youth – mainly gang members – in the Tacoma/Seattle area. While living in Walla Walla, Wa., Greg started the "Bikery" – a bike repair program for youth who were on parole with a local charity.
Now on his own, Gregg is optimistic he can soon create a program to bring in youth interested in learning life skills through bike repair. And as the technology keeps improving on bikes, more and more people are likely to see them as a solid alternative to car culture.
"A lot of folks are switching to one car," he says. "This will vastly increase the probability someone will do that."
The E-Bike Store, 201 N. Alberta St., is open 11 a.m. to 6:30 p.m. Wed. thru Friday and 10 a.m. to 5 p.m. Sat. and Sun. They can be reached at 503-360-1432.

There have been a variety of bike-related improvements being made by the city of Portland this week.
A new bike parking corral opened near the Widmer Brothers Brewing on North Russell Street and an innovative bicycle "cycle track" is now open for commuters on Broadway Boulevard near PSU.
Expanding bike parking and creating safer bike routes are all in an effort to encourage more bike riders in Portland. Coinciding with the new infrastructure, the Bicycle Transportation Alliance is holding its annual Bike to Work Challenge in September. People are encouraged to get together a workplace team and register on www.bikecommutechallenge.com for a chance at prizes or simply recognition for reducing your carbon impact and burning calories. You self report your mileage, so it's not too late to sign up, even after Sept. 1.
The cycle track near PSU is a new experiment for the city. Instead of locating the bike lane on the left-hand side of parked cars, the new cycle track draws the bike lane close to the curb. Vehicles park on the left-hand side of the bike lane, giving cyclists more room and a "warning" stripe in the area where doors from parked cars may open. Getting "doored" in a traditional bike lane is a significant danger for cyclists, causing many to ride closer to moving traffic rather than risk running into a quickly opened car door.