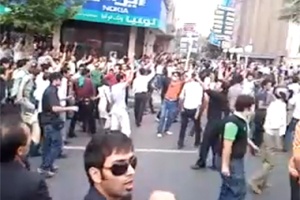 WASHINGTON (AP) _ Republican senators criticized President Barack Obama on Sunday for not taking a tougher public stand in support of Iranians protesting the outcome of the country's contested presidential election, with one saying the president had been "timid and passive.''
As thousands of Iranians have flooded city streets in the past week to demonstrate for a new election, Republicans have been turning up the heat on Obama. The president has sought to send a measured message to the Iranian leadership, with which he still hopes to open a dialogue over its nuclear program.
"The president of the United States is supposed to lead the free world, not follow it,'' Sen. Lindsey Graham, a South Carolina Republican, said on a Sunday morning talk show. "He's been timid and passive more than I would like.''
Critics Monday softened their criticism after Obama made statements against the Iranian regime's violent crackdown on protests.
"The Iranian government must understand that the world is watching," Obama said in a statement. "We call on the Iranian government to stop all violent and unjust actions against its own people."
As the demonstrations, particularly in the Iranian capital of Tehran, have continued and the death toll among protesters rises, Obama has been stiffening his response while trying to avoid giving Iran's theocratic leadership the opportunity to blame the U.S. for the unrest that has swept the country since the June 12 vote.
Incumbent Presi
dent Mahmoud Ahmadinejad was declared the victor by an overwhelming margin, but the speed with which the outcome was announced and Ahmadinejad's victory in areas where he was at a clear disadvantage caused outrage among backers of reformist challenger Mir Hossein Mousavi.
In the meantime, Iran's supreme leader, Ayatollah Ali Khamenei, has put himself in the center of the dispute by warning that the leadership would not tolerate further demonstrations and unrest in the street.
Because of warnings from Iranian authorities against press coverage of the protests, much of the information coming from inside Iran is from personal accounts and videos from bloggers and youtube.com account holders.
Sen. Richard Lugar of Indiana, the top Republican on the Foreign Relations Committee, said Khamenei had pushed the conflict toward a "very brutal outcome'' by refusing to call for a new vote and issuing threats against demonstrators.
Democrats in the Senate say Obama has struck the right balance.
"He's got a very delicate path to walk here,'' said Sen. Chris Dodd of Connecticut. "You don't want to take ownership of this.''
"The worst thing we could do at this moment for these reformers, these protesters, these courageous people in Tehran, is allow the government there to claim that this is a U.S.-led opposition, a U.S.-led demonstration,'' said Dodd, emphasizing Obama's longer-term goal of engaging Iran over its nuclear program.
The United States and much of the Western world believes Iran is developing a nuclear weapon. Iran says it is only trying to develop nuclear reactors to generate electricity.
Sen. Evan Bayh, an Indiana Democrat, agreed with Obama's response. "I think the president is handling a rapidly evolving, very complex situation about as well as you could expect. He has put us clearly on the side of the reformers, clearly on the side of fair and free elections, clearly condemned the violence,'' he said.
Graham, a strong conservative voice in the Senate, said he did approve of Obama's somewhat stronger statement of Saturday in which Obama called on Iran's government to halt a "violent and unjust'' crackdown on dissenters. "The universal rights to assembly and free speech must be respected, and the United States stands with all who seek to exercise those rights,'' the president said.
Sen. Chuck Grassley, an Iowa Republican, voiced disappointment at the overall administration response to the chaos that has gripped some Iranian cities.
"If America stands for democracy and all of these demonstrations are going on ... obviously they are going to ask, do we really care about our principles?'' Grassley said.
Sen. Bob Casey, a Pennsylvania Democrat, countered that Obama had found the correct mix of toughness and diplomacy.
"We should not politicize this issue here in the United States,'' Casey said. "The biggest threat down the road ... is Iran's nuclear program.''
Graham and Dodd spoke on ABC television's "This Week.'' Grassley and Casey appeared on CNN's "State of the Union.'' Bayh spoke on "Fox News Sunday.''