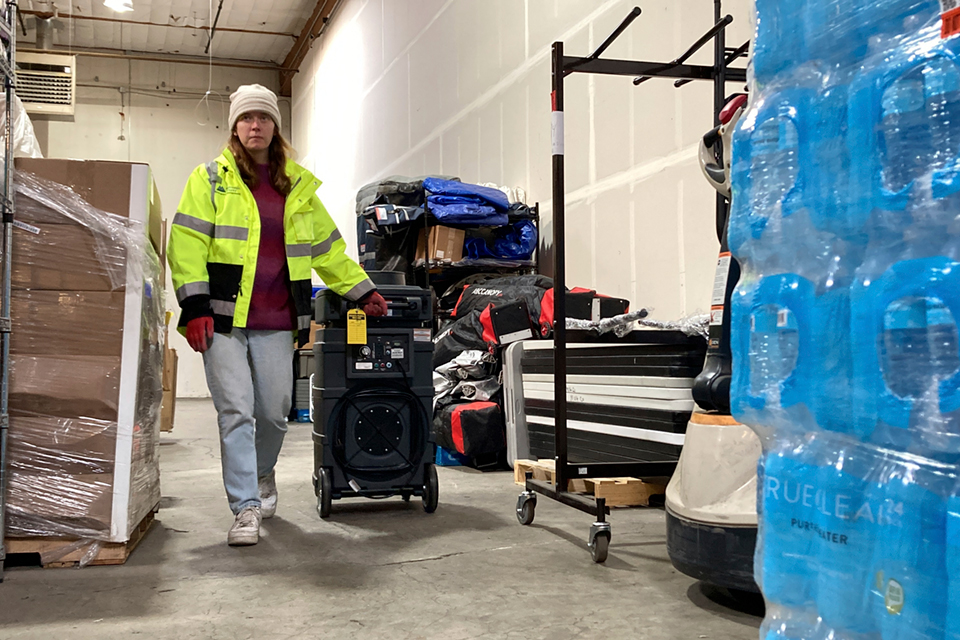 PORTLAND, Ore. (AP) — Extreme cold and strong winds have descended upon parts of the Pacific Northwest ahead of a winter storm that is expected to bring freezing rain, ice and snow to the region starting Thursday afternoon.

Authorities from Seattle to Portland, Oregon, have said one of their biggest concerns amid the cold front is ensuring that homeless people living on the streets have access to shelter.

Exposed to the elements

In Portland, officials opened four emergency shelters after declaring a state of emergency because of severe cold. The shelters were at more than 90% capacity on Wednesday with 394 people spending the night, according to Julie Sullivan-Springhetti, spokesperson for Multnomah County, which is home to Portland.

In downtown Portland Thursday, Steven Venus tried to get on a light-rail train to find shelter after spending the night huddling on the sidewalk in temperatures that dipped to zero degrees with wind gusts of 40 mph. Venus had a sleeping bag wrapped around his head and was carrying an open umbrella he was using to carry his things so he could keep his hands covered.

“It’s cold,” he said, as he paused near a flimsy tent where another homeless person was taking shelter. “My toes were freezing off. They were frozen. The rest of me was fine. It was only my toes.”

He was one of several dozen homeless people still out in the elements in an area of Portland known for a large concentration of tent encampments. One man was sprawled on the sidewalk with his legs exposed, barely covered by a jacket. Another man, who was wrapped in a makeshift covering of plastic sheeting and a tattered coat, got a handout from the Salvation Army as the wind blew his plastic covering away. Yet another man inched along in a wheelchair, clutching a guitar across his legs.

Courtney Dodds, a spokeswoman for the Union Gospel Mission, said teams from her organization had been going out to try to convince people to seek shelter in the cold. But the mission’s overnight facility was already full. Teams were also handing out blankets and other supplies to those who didn’t want to come inside, she said.

“It can be really easy for peope to doze off and fall asleep and wind up losing their lives because of the cold weather. It can be really dangerous,” she said. “We really are concerned for people’s lives who are living outside.”

The regional homeless authority in King County, home to Seattle, has activated its severe weather response and opened additional shelter space, including overnight shelters and day centers. Seattle City Hall is serving as an overnight shelter for adults until at least Saturday, the agency said.

Cold spells have historically taken a toll on the thousands of people living on the streets of Oregon's biggest city. In January 2017, four people were found dead of exposure and hypothermia in a parking garage, at a bus stop, in the doorway of a business and in an encampment in the woods.

Dangerous wind chills were observed across the Portland metro area on Thursday morning, plunging temperatures to zero degrees with wind gusts over 40 miles per hour, the National Weather Service said.

In the Columbia River Gorge, wind gusts topped 85 miles per hour, with a corresponding wind chill of 14 below zero, the agency said.

Such frigid temperatures are unusual for the region, according to Andy Bryant, hydrologist at the National Weather Service's Portland office. He said temperatures were the coldest they have been since 2014.

“It is rare,” he said. “It certainly doesn't happen every winter."

More than 12,000 people in Oregon were affected by power outages early Thursday afternoon across a large area including Portland and Mount Hood, Portland General Electric said.

The National Weather Service has issued a winter storm warning for northwestern Oregon and southwestern Washington state. It has forecast a mix of snow and snow pellets starting Thursday afternoon before transitioning to freezing rain later in the night, Bryant said, adding that the combination of wind and ice could be problematic.

Ice accumulations could range from a quarter of an inch in Portland to an inch in the Columbia River Gorge, Bryant said.

In its storm warning, the agency said that travel may be difficult because of icy roads and reduced visibility caused by blowing snow. It said that power outages and tree damage were likely because of ice, and warned that cold wind chills could cause frostbite on exposed skin in as little as 30 minutes.